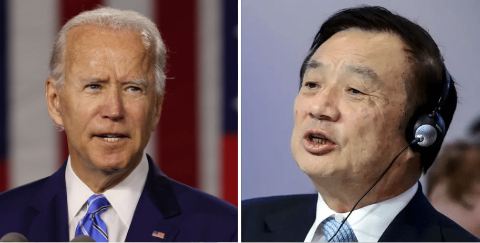 On his first public appearance since March 2020, Huawei CEO and founder, cautioned the US on its market practices under Donald Trump, warned of a US chip market crash and said that her daughter can win the case against the US government.

Ren Zhengfei, the founder of Huawei Technologies, said on Tuesday that it would be “extremely difficult” for the United States to end the sanctions that have hindered its phone business, but that he hoped that an “open policy” would be given to the new U.S. administration.

Ren, who made his first appearance in the media since March last year, said he wanted to see the US administration under Biden to take US business interests into account when shaping its strategy on business with China. He said supplying Chinese companies was “conducive” to the financial success of U.S. businesses.

“We hope the new administration will harbour an open policy for the benefit of the American firms and also the economic development of the U.S.,” he told reporters on the sidelines of a 5G mining project Huawei was launching in the northern Chinese city of Taiyuan. He added he would welcome a call from Biden.

While Ren talked about the survivability of Huawei, he added that the United States should “consider the future” of its chip industry, currently barred from selling to Huawei, while, noting that Intel’s market share had fallen recently.

“If the number drops further, whether the U.S. can continue to keep its chip industry, there’s a big question mark,” he said.

On being asked about the situation about his daughter Meng Wanzhou, who was arrested in Canada in December 2018 on a U.S. warrant and faces the British Columbia Supreme Court, Ren told reporters he was not aware of any talks between U.S. prosecutors and her legal team.

Nevertheless, he said, that her arrest was a “U.S. manipulated political event” and that he has reason to believe they can win the case.

It was reported last month that Huawei is in early-stage talks to sell its P and Mate premium smartphone brands, and had begun exploring the possibility of selling them as early as September to offset losses.

But Ren has denied these reports. He said, “the company would not sell its smart devices businesses and that there would be no major leadership changes.”

But even under duress, Huawei has managed to stay alive and in a very subtle tone, the Huawei founder delivered three demands to the US President a) He wants Huawei back in the American market b) he wants to restart the chip supplies from the US companies and c) he wants his daughter back.

Since Biden has ascended the office, China has grown extremely assertive in US-Sino relations. China has taken full advantage of the newest incumbent’s bonhomie with President Xi. Ren’s demands are a reflection of what the Chinese expect of President Biden if he wants deeper engagements with China.

How much of a role did Fauci play in the eviction of Donald Trump?