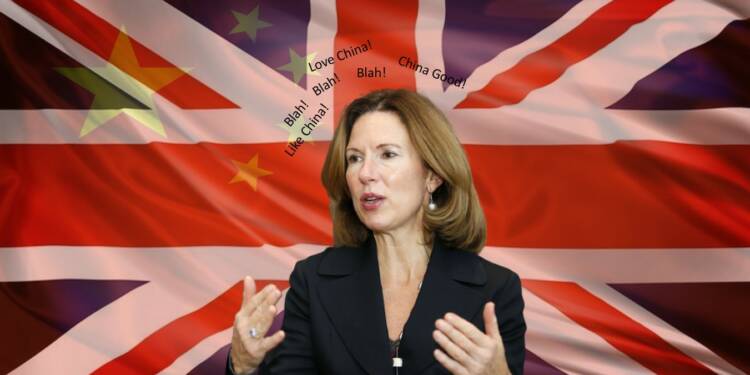 The warfare among the great powers has transitioned from old school banter to now attacking the target country via multiple verticals. Be it cyber warfare, information warfare, using compromised assets of the target country, who have been carefully brought to Beijing’s side as and when the situation permits. Keeping this in mind, the Chinese Communist Party has initiated its efforts to use the British ambassador, Caroline Wilson, to lobby China’s case with the United Kingdom. With the current economic situation coupled with the drying up of investments as well as disappearing manufacturers, Beijing has been forced to use this method out of desperation.

In an interview with the Chinese Communist Party mouthpiece, Global Times as well as CGTN, the British Ambassador to China was seen highlighting the importance of China and why it is important for the world let alone the UK to engage with Beijing and reach actionable consensus for the cooperation on issues of common interest. In the name of expressing her perspectives on dealing with climate change and preserving global biodiversity, Caroline Wilson transformed into a China praising bard and started acting like someone who represents the interests of China rather than her homeland the United Kingdom.

The Chinese Communist Party is already trying to extend its tentacles in the societies of its adversaries, and the UK is for sure on the list. The UK has been working on containing the influence of the extreme left in the country, as they have long been ideologically inclined towards Beijing and may act as compromised assets when left unchecked. Not only the overt socialists, but many are also covertly working for China, becoming the enemies within.

While the above statement has long been considered by analysts and has stayed in public discourse, the absence of any efforts on the part of western media to highlight this issue has kept such a critical concern in the cold basket. However, the latest comments and statements by UK’s Ambassador to China are so pro-China that one cannot ignore them. She highlighted the importance of China which cannot be overlooked when addressing global issues, while conveniently sidestepping the major issues of Beijing acting as a rough and irresponsible state, unbecoming of the position it holds internationally.

A new level of China appeasement:

A CGTN reporter spoke with Caroline Wilson, British Ambassador to China, on the sidelines of the 15th meeting of the Conference of the Parties (COP15) to the United Nations (UN) Convention on Biodiversity. The diplomat expressed her perspectives on dealing with climate change and preserving global biodiversity. She said she was deeply moved by Chinese President Xi Jinping’s speech at the COP15 leaders’ meeting, in which he announced that China will establish a special fund to assist developing nations in protecting biodiversity.

“He appeared to be highly committed to the agenda on a personal level. And he talked about what the agenda meant to him in a really visceral way. And he offered some really powerful examples of conservation in China, including, of course, redlining, red districts, and existing preservation. So far, I think it’s a promising start.” she stated. Wilson also gave her thoughts on China’s important achievements in creating a beautiful nation with harmonious human-nature interaction.

“This is truly looking after and conserving nature’s habitats; otherwise, humanity will face greater issues… ‘Coexist’ is about the human-nature interface because if we don’t properly care for that interface, it can have extremely serious health consequences ” she added. These statements and comments coming at a time when China is desperately seeking investors and is finding it difficult to manage all the issues it has created for itself both domestically and internationally.

The biggest threats to a nation are not always its adversaries, but sometimes these are some of its very own citizens, who are willing to compromise their whole nation for their selfish agendas. The fact that she is parroting the statements which are more beneficial to Beijing rather than the country she gets her pay from, goes on to show the effectiveness of CCP’s ability to create compromised assets out of people on influential positions in the target country.