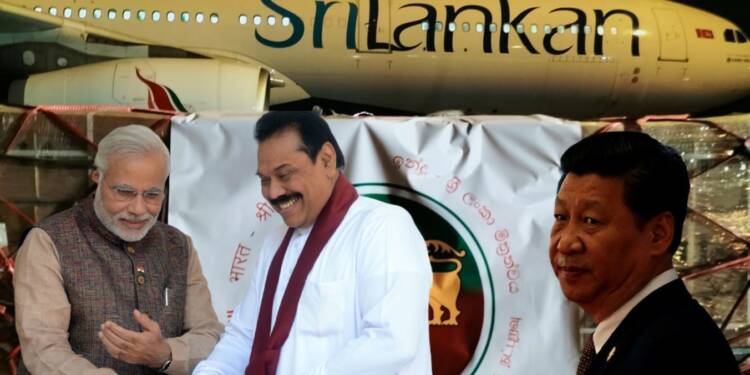 To win a war without much effort, one should make the target country dependent on itself and strike economically at the right time. All great powers with economic might to pursue this course of action have done so, but China has taken this to another level. Beijing is using this methodology to further not only its national interests but to pursue the policy of neo-colonialism. Sri Lanka’s Federal Reserves are at an all-time low, the economy is unable to turn green, and as the government tries to address all of these concerns, China has arrived with some deliverables. Although Beijing tried to dump its poisonous fertilisers in Sri Lanka, it has not succeeded, given India is standing resolutely behind the Lankan people.

Colombo negotiated a contract with Qingdao Seawin Biotech Group, a Chinese company that specialises in seaweed-based fertiliser, in an attempt to make Sri Lanka the world’s first organic farming nation. However, Colombo refused to accept the shipment given the country realised that the shipment was poisonous. As the tensions grew, a judge ordered the state-owned People’s Bank to halt payment of $9 million for cargo that had previously been approved for entrance, further escalating the tensions.

The bilateral tensions between China and Sri Lanka:

Sri Lanka’s refusal of the initial cargo of 20,000 tonnes of organic fertiliser has strained relations between the two countries. The Chinese embassy in Colombo retaliated by placing the bank on a blacklist for failing to honour the payment to the enterprise.

The Chinese organic fertiliser company has sent a set of conditions to the Agriculture Ministry, requesting payment of 70% of the original tender agreement’s agreed price as well as additional freight charges. According to ministerial sources, the Chinese company is demanding 70% (USD 5.6 million) of the initial tender agreement (USD 8 million), USD 36 million in freight costs, and a joint statement with the Ministry declaring that the shipment was turned down due to an import permit dispute, not the quality of the fertiliser.

In addition to these terms, the corporation stated that the shipment will not be subjected to any further sample testing in the future. The requests were made in a letter submitted to Agriculture Minister Mahindananda Aluthgamage and State Minister Shasheendra Rajapaksa on November 9 by Chinese firm director Song Hai Meito. Commercial Fertilizers Ltd and Ceylon Fertiliser Company Ltd chairman received copies of the letter.

The letter came after the Agriculture Ministry turned down the Chinese company’s request for a third-party test and stated that the contaminated shipment would not be allowed to discharge its cargo in any port in the country under any circumstances.

China has been using Sri Lanka as a dumping ground for a while:

Back in April, Sri Lanka had detected radioactive material on a China-bound vessel berthed at the southern Hambantota Port. According to officials, the ship was ordered to depart, as the shipping firm was failing to obtain prior authorisation for “dangerous cargo,” in accordance with Sri Lankan law.

Read more: China bullied the Sri Lankans to dock its vessel loaded with radioactive material on the Hambantota port

Captain Indika de Silva, a spokesman for the Sri Lankan Navy, confirmed the news when contacted. Officials said a local shipping firm, which was handling the vessel sailing under the flag of Antigua and Barbuda from Rotterdam, Netherlands, to Hambantota, China, cited a “mechanical emergency” and requested permission from the harbour manager at the China-run Hambantota Port. But, under the Atomic Energy Act of Sri Lanka, the carrier did not declare the cargo to be radioactive.

India comes to Sri Lanka’s rescue at the nick of time:

Amid a row between Colombo and Beijing over the decision of the Indian Ocean nation’s authorities not to allow a ship carrying 20,000 tonnes of organic fertilisers from China to offload the consignment, New Delhi stepped in to support the Sri Lankan government’s initiative to promote organic farming. Two IAF C-17 Globemaster planes carrying 100,000 kg of Nano Nitrogen arrived at Bandaranaike International Airport.

In a news release, the High Commission of India in Colombo claimed, “The deployment was primarily to support the Government of Sri Lanka’s initiative towards Organic farming and to hasten the availability of Nano Nitrogen Fertilizer to Sri Lankan farmers.” While India has come to the support of Sri Lanka this time around, the Lankan government too should understand that increased engagement with China carelessly will impact the security balance in the region which Sri Lanka in its current economic situation cannot afford.