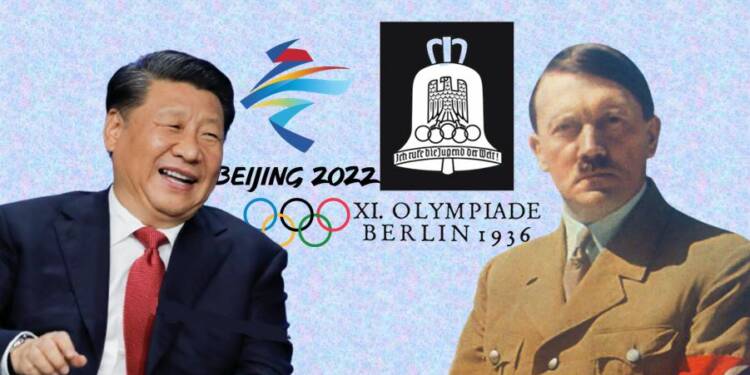 If there is a country that comes remotely as close as Nazi Germany, it has to be Xi Jinping‘s China. Just like Adolf Hitler executed the genocide of the non-Aryan communities including Jews, Jinping is executing the genocide of ethnic minorities like Tibetan Buddhists and Uyghur Muslims. Similarly, the People’s Republic of China (PRC) is as expansionist a power in twenty-first century Indo-Pacific as Nazi Germany was in twentieth century Europe.

Yet, the world failed to stop Adolf Hitler in the last century due to one big mistake, that is letting Hitler organize the 1936 Berlin Olympics. Similarly, the world could be making an equally big mistake by letting China organize the 2022 Winter Olympics in Beijing.

How the 1936 Olympics emboldened Adolf Hitler:

Adolf Hitler had seized power in Germany in 1933. Soon, Hitler made his racist and belligerent motives clear. He was very clear about attacking France and Poland, and reversing the 1919 Treaty of Versailles, which had compelled Germany and its allies to accept sole responsibility for the first World War, apart from making territorial concessions.

Inside Germany, Hitler had installed a brutal regime for the Jews. Antisemitism had started peaking with the Nazi-backed Nuremberg Laws stripping Jews in Germany of their legal rights and citizenship statuses. There was a visible backlash against Hitler’s totalitarian policies. Hitler shamelessly approached the International Olympic Committee (IOC) with a request to ban Jewish athletes from competing in the Olympics.

There was an international boycott movement in the United States and other western nations against the Berlin Olympics. However, Hitler fooled the US and other nations by ordering the removal of antisemitic content in Berlin just days ahead of the 1936 Games. The international press too, helped Germany to create the illusion that talks of racial segregation and expansionism were just casual gossip, and an exaggeration. This allowed Hitler, a racial hatemonger, to organize the biggest sporting event in the world with great fanfare.

How Hitler used the 1936 Olympics:

As per Barbara Burstin, who is a history lecturer at the University of Pittsburgh and Carnegie Mellon University, “It (the 1936 Games) provided Hitler with a showcase.” Burstin also added, “It was a propaganda bonanza for him.”

From a practical standpoint, the 1936 Olympics legitimized Hitler’s tyrannical regime. Burstin said, “It kind of dulled the opposition to [Hitler] that clearly had been quite evident up to 1936.” She added,  “A lot of people felt he was clearly heading in the wrong direction, and by going to the Olympics we gave him the opportunity to appear sane, rational and tolerant.”

Hitler himself made a big deal out of the 1936 Olympics. The Berlin Olympics were the first to feature a torch relay and also the first to be broadcast on television. As many as 4,000 athletes participated in the multi sport competition across a total of 129 events. He also made it a point to oversee the opening ceremony of the Olympics, and also made a public statement at the same.

While Hitler made a great show out of the Olympics, the US and the rest of of the world seemed like defeatists. Two Jewish runners for the U.S. team, Marty Glickman and Sam Stoller, for example, got pulled by their coach from the 4×100 meter relay a day before the event. Till today, the decision to sit out Stoller and Glickman remains contentious and one wonders if the Jewish athletes became victims of the USA’s attempts to appease Germany.

The consequences of the 1936 Olympics:

After the 1936 Olympics, many people across the world thought that Germany had got itself out of the economic collapse that it faced after the first World War. It had acted as a great host and the west had accepted it. This inflated Hitler’s ego and so, he started a grand expansionist programme after the 1936 games.

The 1936 Olympics had unwittingly elevated the status of Adolf Hitler. So, he met Italian dictator Benito Mussolini a year later in Germany. This was a great fanboy moment for Hitler and the meeting was dominated by rituals of a state visit and camaraderie between Hitler and Mussolini.

Soon, Hitler went into a rampage. The genocidal Holocaust started with Kristallnacht in 1938. A year later, Germany invaded Poland and the second World War started that led to a near-total destruction of the European continent over the next six years. Allowing the 1936 Olympics to be held in Germany did create a lot of momentum fuelling Hitler’s murderous campaign.

Is the world making the same mistake with the 2022 Beijing Winter Olympics?

Yes, the world is making the same mistake again. The US, which has traditionally played the role of saving the democratic world from evil dictators, is simply not doing enough to boycott the 2022 Beijing Winter Olympics. Had Trump been in power, he would have pushed the entire democratic world to boycott China. However, all that Biden has managed to do is to work out a partial ban, that is, neither President Biden nor any other US government official might attend the 2022 Winter Olympics to be hosted by Beijing.

Also read: What Hitler did to Jews, China is doing the same to Uyghurs in times of Corona

Make no mistake, China of today is, in fact, the Germany of Hitler’s era. There are simply way too many similarities between Hitler and Xi Jinping. If Hitler was killing Jews and running concentration camps, Jinping has already started internment camps and labour camps to torture Uyghur Muslims. Just like Hitler was looking to expand the German empire by invading French and Polish territories, Jinping is trying to grab Indian territories in the Himalayas, Japan’s Senkaku Islands, several disputed islands and other geographical features in the south China sea, and even the Russian Far East.

And finally, Xi Jinping is killing whatever little freedom that did exist in China, by creating a personality cult on the lines of Hitler’s personality cult in Nazi Germany. Jinping abolished term limits early into his tenure, which implies that he can stay President for life. Now, he has also scrapped a CCP ban on personality cult. He is amplifying his so-called achievements in a bid to consolidate power.

Xi Jinping is doing his job by modelling the behavior of a dictatorial bully. However, it is the free world countries like India, Australia, Japan and the USA, who must not let him get emboldened by hosting the 2022 Beijing Winter Olympics, like Hitler had got emboldened after hosting the 1936 Olympics.