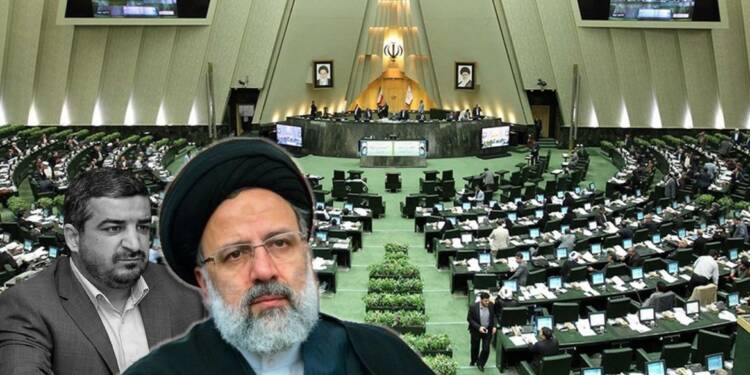 A noisy rift has struck the hardliner camp of Iran just 100 days after Ebrahim Raisi’s rise to the helm. Several conservative lawmakers are looking askance upon the way the Raisi administration is steering the nation without a cogent plan. Some lawmakers are even predicting another civil uprising in the country, if necessary, steps are not taken anytime soon.

As a result of the widening rift in the conservative camp, the Iranian parliament (Majles) on Tuesday rejected for the second time President Ebrahim Raisi’s nominee for education minister. The message sent from the parliament was loud and clear—Parliament won’t tender unconditional support to Raisi if some necessary changes are not taken into account.

Raisi wanted to appoint Masoud Fayazi as his education minister, who made it a point to tell the parliament how Fayazi came across as the most suitable candidate for the post. He also stated that he and his colleagues had rated Fayazi an excellent candidate.

His vehement defence of Fayazi and his presence in the parliament to back his candidate made the defeat even more damaging for Raisi. Out of 260 lawmakers present in Majles, only 115 threw their support behind Raisi’s nominee, resulting in his rejection by the parliament.

Allegations of Nepotism have also rocked the boat of Raisi, who is struggling to keep various principlists from openly criticizing his policies and his choices for some ministerial posts. For instance, the major opposition to Fayazi’s nomination stems from the fact that he is the brother of Tehran Mayor Alireza Zakani’s son-in-law.

Raisi’s backers have nothing much to boast upon his 100 days tenure so far; however, his supporters in media highlight his three top achievements since he assumed charge of the Islamic Republic.

But Raisi’s opposition is not buying these hefty claims without excessive scrutiny. Iranian reformist analysts like Abbas Abdi points out how Raisi’s provincial visits could soon lose popularity as people are increasingly finding out his visits are nothing more than a mere PR campaign for his administration.

The vaccination campaign is certainly not the bright spot of Raisi’s tenure so far, with his administration weighing down vaccination drive by introducing a blanket ban on vaccines produced by the US and Europe. The efforts by the Iranian government started yielding results only after August when vaccines of other countries, including China and India, started piling up in the country.

Lawmakers say Raisi lacks a plan to steer the nation away from crisis:

Meanwhile, Gholamreza Noori, a conservative lawmaker in an interview with moderate website Rouydad24 said that “the country’s economy is facing a major crisis and criticism of the Raisi administration is gaining momentum on a daily basis.” He also mocked Raisi for his futile provincial visits saying that “It is good that he visits the provinces, but it is not good that he says he visits to find out about their problems.”

Some anti-Raisi media outlets also write that the “honeymoon period of Raisi administration” is already over and the administration must do something substantial to raise public confidence in the Iranian authorities.

Noori added: “Every day if you listen to parliament proceedings on the radio you will hear conservative lawmakers complaining against the administration’s shortcomings.” He warned that “There is a limit to the lawmakers’ patience.” Earlier, another lawmaker, Massoud Pezeshkian had warned that if these problems are not solved within a reasonable period, the nationwide protests that shook Iran in 2018 and 2019 are likely to reoccur.

Make no mistake, there is considerable opposition to Raisi’s presidency even among some Iranian elites, including family members of the founder of the Islamic Republic of Iran Ayatollah Rohullah. Hassan Khomeini – grandson of Ayatollah Rohullah—had vehemently opposed the brazen engineering of the Iranian polls to make Raisi reach the helm of the affairs.

He had then said that “Were I among the eligible candidates, I would have withdrawn my candidacy.” On 31st May, Hassan Khomeini had told a crowd of Iranians that the new government which will be formed will not have the backing of the public and will thus be an ‘illegitimate’ one. He had said, “The people’s vote is a condition for the legitimacy of the system,” adding that a government that does not enjoy general acceptance “has no legitimacy.”

The President’s opposition in an ultraconservative theocracy like Iran is unimaginable unless there is a powerful and influential player behind the critical voices.

Raisi attributing “sins committed by young Iranians” for the burgeoning economic and water crisis in the country has only aggravated the situation. Iran’s ambiguous policy regarding the JCPOA deal has only worsened its economic woes. With the Iranian parliament now openly going all out against the Raisi-backed education minister, it is abundantly clear that Raisi’s grip over power in Iran is dangerously declining, and even Iran’s foul-weather friend China may find it perilous to stave off his political woes.