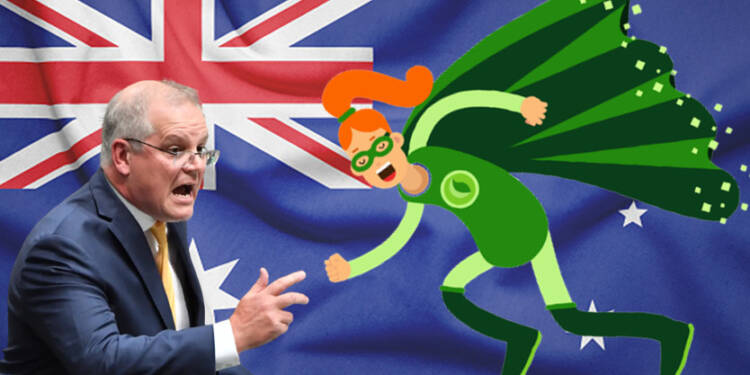 The Australian government has been extremely successful when it comes to the economic offensive that the Chinese Communist Party had launched against it. Not only was Australia able to negate any losses that it could have incurred due to Beijing shutting its markets, but Canberra was able to make it extremely costly for China. However, now Australia is facing another threat and this time it has come from within its boundaries. Everyone is well aware of how the NGOs and ecological causes are used to hamper a country’s output of certain strategic products or materials, and these eco-fascists have set their eyes on Australia’s Coal production.

The Morrison government did not kowtow in front of the Chinese Communist Party and Xi Jinping, and it most certainly is in no mood to let these agenda-driven eco-fascists disrupt its Coal production and export capacities. As reported by ABC News, Australia’s Deputy Prime Minister Barnaby Joyce said that protesters have disrupted $60 million worth of coal exports in the past week, and called for actions for its end. Activists in the NSW Hunter region, north of Sydney in New South Wales, have conducted their tenth day of protests, preventing coal-laden trains from entering the world’s largest coal terminal, the Port of Newcastle.

Seventeen people have been arrested in connection with similar protests, including two on Monday, prompting NSW Police to form Strike Force Tuohy.

Anti-coal protestors who have wreaked havoc on NSW train lines for more than a week face 25 years in prison if they continue to demonstrate, according to the state’s top cop. Since the beginning of last week, a group of climate activists has been blocking coal trains from entering the Port of Newcastle in the Hunter region.

Commissioner Mick Fuller stated on Tuesday that Strike Force Tuohy has been formed by officers from the Newcastle City Police District as part of proactive operations “to actively prevent and disrupt illegal protests in the Hunter/Newcastle region.”

According to Deputy Prime Minister Barnaby Joyce, each coal train that is stopped generates roughly $100,000 in royalties and thus stopping it leads to equivalent losses. “What it means is that they’re stopping payments to your hospitals, police, schools, and tax income,” he told Sky News Australia earlier.

The recent blockades are entirely and utterly unreasonable.

Just because you have a different worldview doesn't give you the right to put our industry, our finances, wheat farmers, grain farmers, coal producers, and commuters at risk. pic.twitter.com/zbwYBWL9en

He called the current blockades “completely and absolutely unreasonable” in a tweet. He wrote on Twitter, “Just because you have a different mindset doesn’t give you the right to jeopardise our industry, our finances, wheat farmers, grain farmers, coal producers, and commuters.”

How Australia used coal to bring China on its knees:

Xi Jinping wanted to punish Morrison for speaking up against Chinese authoritarianism, so he decided to weaponize Australia’s dependency on China for running its exports industry. China banned the import of many Australian commodities. The biggest and most contentious of those bans was, of course, the unofficial ban on Australian coal. However, Xi has gradually realised that China can’t survive amid the lack of Australian coal, so the Chinese President has quietly kneeled before Morrison and has decided to buy Australian coal.

China has realised how perilously it is, too dependent on Australian coal. For the past year, China has been facing a severe electricity crisis. Last year, the adverse effects of rising coal prices in China were starkly visible during the winter months. Many Chinese cities went dark since December 2020 itself, when lights went out and restrictions were imposed on the use of heating devices. This year, China’s electricity crisis has gone up tremendously as a paranoid Xi Jinping continued the policy of blocking coal shipments from down under. Therefore, China had no option but to import coal from Australia. The abundance of natural resources and allies coming to its rescue saved Australia against the Chinese offensive and even helped it to turn the tide entirely against China.

While the coal output of Australia has been a reason for its geopolitical win over China, however, some of the highly entitled youngsters aka eco-fascists with no knowledge of the intricacies of international politics have extrapolated the climate issue and attempted to take the whole of Australian coal exports hostage. However, the Morrison government has launched a war against these people, as Canberra cannot afford a compromising development domestically at a time when it is engaged in an international tug-of-war against China.