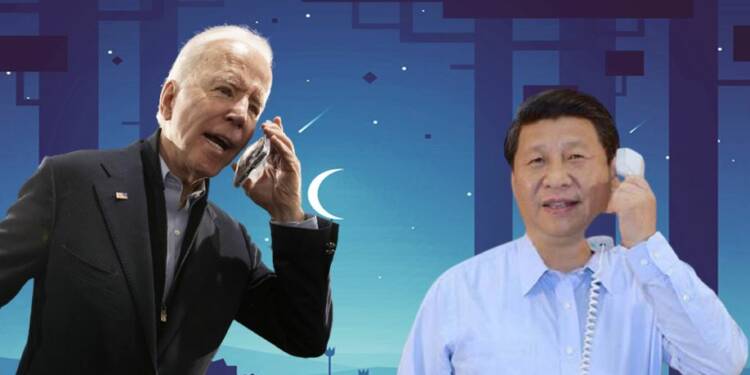 Biden’s phone call to Xi Jinping was made in a moment of panic. After coming to power, Biden had advanced two different agendas-

Though Biden is a China-lover, he has been acting like a China-hater to avoid any backlash on the bipartisan issue of the Chinese threat. On the other hand, climate activism is a part of Biden’s woke voter support base. Anyhow, Biden abandoned both the agendas during his phone call with Xi Jinping.

During his 3 1/2 hours summit with Xi, Biden went as far ahead as requesting China to release oil reserves. The same matter was also discussed between Chinese Foreign Minister Wang Yi and U.S. Secretary of State Antony Blinken during an earlier telephonic conversation.

Biden’s request to Xi Jinping is intimately linked to the global oil crisis and depleting oil reserves in the US. Within the US too, gasoline prices are surging uncontrollably and have hit a seven-year high. In California, the prices have hit an average price tag of $4.687 for a regular gallon. Meanwhile, domestic oil production in the US has remained nearly 2 million barrels a day below its record of 13.1 million barrels a day owing to Biden’s attacks on the oil industry.

High gasoline prices are putting further pressure on the American retail market. The US consumer prices jumped 6.2% in October, which is the biggest inflation surge in the last 30 years. Most importantly, both fuel and food prices have jumped sharply which profoundly affects the spending of an average American household.

Commodity prices are beginning to climb a steep ladder, and the American public is getting infuriated at how the Biden administration is doing nothing to resolve the impending crisis. Travelling is about to get very expensive as the festive season kicks in and people begin travelling to their homes to spend time with families. Yet, the surging prices might just prevent Americans from even meeting their families, since the Biden administration has made travel a luxury that only the rich can afford.

High gasoline prices stand at the very root of high inflation levels in the American economy and an unnerved Biden wants to resolve this situation at any cost. Unsustainable fuel inflation is partly a consequence of Biden’s own policy failures. After coming to power, Biden passed a blanket order that banned new oil and natural gas leases and drilling permits on federal land and in federal water for 60 days. Such rash measures have led to escalating gasoline prices in the US.

On the other hand, the Organization of the Petroleum Exporting Countries (OPEC) too is unwilling to help the US. There was a time when the US used its shale oil production to break through OPEC monopoly in the oil sector and even eat into the market of OPEC nations.

Today, OPEC and its oil-producing partners are feasting on rising oil prices, and they are simply not taking cognizance of Biden’s request to hike oil production and normalize prices. In fact, Biden’s request to increase oil production has been rebuffed by OPEC, and the oil-producing nations have given a simple answer to Biden – go pump your own oil.

Biden wants to rely on China for helping resolve inflation:

So, this means Biden needs China’s favours to resolve high inflation in the US. The US President is battling really low approval ratings with 63 per cent of respondents being quoted in a latest poll as saying that Biden has achieved “not much”, “little” or “nothing” after ten months in office. Biden’s approval ratings will drop further as inflation rises in the US.

Low approval ratings are forcing Biden to take China’s help. But here is the real deal- China doesn’t help anyone for free. It wants to use Biden’s compulsions as leverage to extract the maximum possible advantage out of the US, just like Iran doesn’t restrict its nuclear programme and demands complete sanctions withdrawal as a precondition for reviving the Joint Comprehensive Plan of Action (JCPOA).

In fact, Biden may be already succumbing to China’s intimidation. US Treasury Secretary Janet Yellen has already advocated cutting American tariffs on Chinese imports to reduce inflation. Biden has been already relying on Chinese imports to curb the post-pandemic slowdown and as of October, the US was importing Chinese goods at an annual rate of $600 billion, an overall increase of 60% increase from the pre-Covid level of October 2018.

Xi could therefore be successfully strong-arming Biden into relaxing Trump-era trade tariffs against China. Meanwhile, Wall Street too remains bullish about China’s growth and its place on the global investor map. Wall Street continues to push for investments into China, and this is raising many eyebrows. According to a New York Times report, for some of the biggest names on Wall Street, China’s economic prospects look rosier than ever. BlackRock, the world’s biggest asset manager, urged investors to increase their exposure to China by as much as three times.

J.P. Morgan asked, meanwhile, “Is China investable?” before answering, “We think so.” Goldman Sachs says “yes,” too. But such statements by the bulls of Wall Street are not happenstance. They seem to be following a pattern – a striking one at that.

At the height of a market sell-off in late July, the deputy chairman of China’s securities regulator, Fang Xinghai, summoned executives of BlackRock, Goldman Sachs and other firms to a meeting, trying to alleviate investor nervousness over Beijing’s crackdowns. Wall Street is thus helping pump money into Chinese markets to drag China out of its real estate and debt crisis following the Evergrande collapse.

Biden has therefore kneeled before Jinping and seems to have struck a give-and-take relationship with the Chinese President. Biden wants Xi’s help in tackling the oil and inflation crisis while giving China what it needs – relaxation in trade tariffs, American investments, return of companies that once left China and legitimization of the CCP in the US all over again.