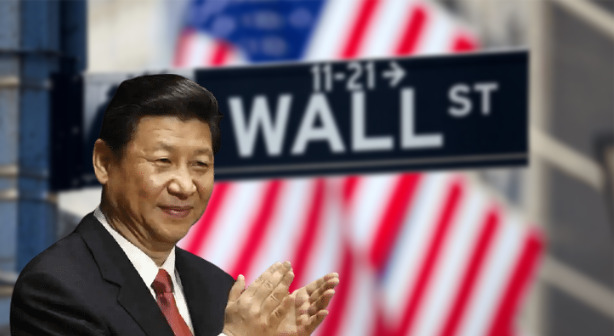 China is no longer the most attractive investment destination in the world. Investors are fleeing China with all their money and they are turning towards the Indian stock markets. India’s benchmark share index is the biggest gainer this year amongst the largest country indexes around the world. There is too much volatility in the Chinese stock markets. Worse still, China is doing nothing to address this volatility and is allowing an anti-business environment to fester. Since such a far-left, anti-capitalist campaign is being waged by Xi Jinping himself, there is not much which can be done to alleviate China’s woes.

Investors, businesses and firms from around the world are beginning to realise the risks and the consequence of their entanglement with China. The MSCI China Index is down to nearly 20% this year. But we will come to China’s dismal economic and financial indicators a bit later. Right now, we need to address the burning issue – Wall Street has gone head over heels for China. It is almost as if China has purchased Wall Street. What else explains the gushy statements of Wall Street concerning China in recent times? It is simply confounding.

What is Wall Street Saying About China?

Believe it or not, Wall Street is bullish about China’s growth and its place on the global investor map. Wall Street continues to push for investments into China, and this is raising many eyebrows. According to a New York Times report, for some of the biggest names on Wall Street, China’s economic prospects look rosier than ever. BlackRock, the world’s biggest asset manager, urged investors to increase their exposure to China by as much as three times.

J.P. Morgan asked, meanwhile, “Is China investable?” before answering, “We think so.” Goldman Sachs says “yes,” too. But such statements by the bulls of Wall Street are not happenstance. They seem to be following a pattern – a striking one at that.

At the height of a market sell-off in late July, the deputy chairman of China’s securities regulator, Fang Xinghai, summoned executives of BlackRock, Goldman Sachs and other firms to a meeting, trying to alleviate investor nervousness over Beijing’s crackdowns. According to the NYT report, 20 days later, regulators in China approved BlackRock’s application to offer mutual funds in the country. Parallelly, a BlackRock executive told The Financial Times that China was underrepresented in global investors’ portfolios and in global benchmarks. The firm recommended that investors boost their allocations by two to three times.

But that is not where BlackRock stopped. It seems keen to parade China as the penultimate investor destination for the world. In a statement, BlackRock said that its global clients “can benefit from portfolio diversification that includes more deliberate asset allocation to China.”

The indications are clear. At a time when the Chinese economy is being dealt with one blow after the other, for Wall Street to continue with its pro-Beijing bullishness is indeed strange. Such is the thirst of Wall Street to make inroads in China that companies like Goldman Sachs are hiring sons, daughters, nephews and nieces of CCP’s Politburo in its plush US offices without any experience and qualification to show its goodwill. In 2016 JP Morgan Chase was fined by American regulators for giving jobs to well-connected Chinese “princelings”.

Wall Street giants such as Goldman Sachs Group Inc. and JP Morgan Chase & Co. have tens of billions of dollars at stake in China as political tension between Washington and Beijing risks derailing the Communist nation’s opening of its $45 trillion financial markets. Five big US banks had a combined $70.8 billion of exposure to China in 2019, with JP Morgan alone ploughing $19.2 billion into lending, trading and investing. Therefore, it is natural for such firms to not try and upset the CCP, which would put all their fortunes currently stashed in China in jeopardy.

As reported by TFI last year, Goldman Sachs and Morgan Stanley have taken major control of their Chinese securities ventures. HSBC acquired full control of its Chinese life insurance venture. Citi received a coveted custody license to serve institutional investors in China. And none of these firms wants to pull out of China just yet.

The Reality of China’s Economy

China’s economy is beginning to slip down the drain. China’s forex reserves have been hovering around the $3.1 trillion mark, with repeated bouts of decline being witnessed. China’s reserves have shrunk from $4 trillion in 2014 to $3.2 trillion. It is an indication of the economic and financial security risk, the country “officially” finds itself in.

China is facing a ballooning debt crisis which is showing no signs of abatement. Companies are defaulting on magnanimous loans, as a result of which banks and lenders are going down. Investors, meanwhile, witnessing the bad debt crisis of China are fleeing en masse – which is also why Chinese stock markets are plummeting.

China’s domestic debt has ballooned and can no longer be sustainably refinanced, resulting in an alarming increase in defaults on local loans. Chinese companies’ debt servicing costs are climbing, with $2.14 trillion of bonds maturing by 2023, 60 per cent more than the value of bonds that came due from 2018 to 2020 alone.The total government debt ratio in China is 45.6 percent of GDP. While the central government’s debt ratio is 20 per cent, the local governments’ debt ratio is 25.6 per cent.

Initial Public Offerings (IPOs) on the Chinese stock markets are slumping. A massive downturn seems imminent since Chinese authorities are continuously poking their noses in the stock markets and tweaking regulations even as the markets trade high. Meanwhile, the combined market capitalisation of ten leading IT and high-tech companies, including Alibaba Group and Tencent Holdings, has plunged by over $800 billion or almost 30 per cent from a peak in February.

China Evergrande Group, which is the second-largest real estate group in the Communist nation, is on the brink of defaulting on its debt obligations. However, while the world looks at Evergrande Group’s downfall anxiously, a bigger debt crisis is evolving in China. Another Chinese property developer – Fantasia has bitten the dust which exposes how China’s heavily indebted real estate sector is a ticking time bomb that can explode any time and lead to an unprecedented collapse in the Chinese economy.

Despite the availability of such facts – which would drive any sane investor out of China, Wall Street, despite all the resources at its command, is still vouching for the ability of China to handle its many crises, and that its current situation should in no manner deter investors from placing bets on Chinese stock markets. This indeed points towards the CCP’s influence over Wall Street giants, and how the CCP is desperately trying to carve a narrative in its favour using its proxies in New York.