Xi Jinping is brewing the most lethal concoction for China’s economy, and the repercussions will mean absolute downfall 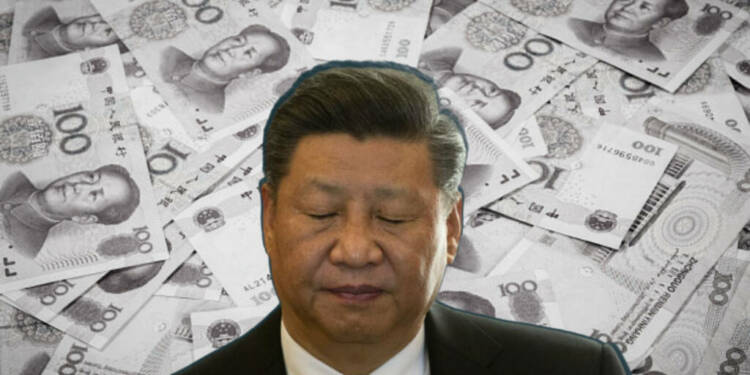 The Chinese economy has become a concoction of a financial system on the verge of collapse, non-performing assets, bad debts, unmotivating markets, sedentary forex reserves and a government, which is heavily involved in markets and businesses with the sole aim of inhibiting their growth. At the helm of this toxic economic campaign is CCP General Secretary Xi Jinping. The Chinese economy has been surviving on the edge for quite some time now – however, its woes were exacerbated last year with Covid-19 and a global pushback against the paper dragon.

China’s forex reserves have been hovering around the $3.1 trillion mark, with repeated bouts of decline being witnessed. Only in April, Chinese reserves rose by 0.89 per cent. In comparison, the reserves had shrunk in March by 1.09 per cent. But these are all “official figures” and the thing with China has always been that the reality has been far from the truth. Therefore, it would be safe to assume that China’s forex position is worse than what is visible to the public eye.

Due to the failure of the Belt and Road Initiative and countries around the world growing sceptical of Chinese involvement, apart from lower exports – China’s forex has been shrinking. That China’s reserves have shrunk from $4 trillion in 2014 to $3.2 trillion now is very indicative of the economic and financial security risk the country “officially” finds itself in. Unofficially, all hell seems to have broken loose.

China is facing a ballooning debt crisis which is showing no signs of abatement. Companies are defaulting on magnanimous loans, as a result of which banks and lenders are going down. Investors, meanwhile, witnessing the bad debt crisis of China are fleeing en masse – which is also why stock markets are plummeting.

According to the SCMP, China’s domestic debt has ballooned and can no longer be sustainably refinanced, resulting in an alarming increase in defaults on local loans. So far this year, the rate of domestic corporate defaults is double that during the Chinese stock market crash of 2015.

Read more: China is going to collapse under its own weight due to the glaring loopholes in its financial market

Chinese companies’ debt servicing costs are climbing, with $2.14 trillion of bonds maturing by 2023, 60 per cent more than the value of bonds that came due from 2018 to 2020 alone.The total government debt ratio in China is 45.6 percent of GDP. While the central government’s debt ratio is 20 per cent, the local governments’ debt ratio is 25.6 per cent. Investors are hardly motivated by such figures – which many believe to be a gross underestimation of China’s actual financial health.

Danke, which functions as a rental agent for half a million Chinese tenants, is reported to have run into financial problems. It is also alleged of having failed to pay their landlords across China as a rental agent. Similarly, in June last year, it was found that Kingold – China’s largest privately-owned gold processing and jewellery company, had passed off 83 tons of gilded copper as gold in collateral.

Initial Public Offerings (IPOs) on the Chinese stock markets are slumping. A massive downturn seems imminent since Chinese authorities are continuously poking their noses in the stock markets and tweaking regulations even as the markets trade high. At the same time, Xi Jinping is also bullying Chinese businesses – especially tech giants, while also specifically targeting the fintech sector. Overall, the market sentiment is negative – and if the markets collapse now, a recession seems imminent.

The combined market capitalisation of ten leading IT and high-tech companies, including Alibaba Group and Tencent Holdings, has plunged by over $800 billion or almost 30 per cent from a peak in February.

Meanwhile, Australia has effectively stamped its authority in the Australian commodity market. It has exposed China to be a heavily import-dependent country. Because China is the largest consumer of most industrial commodities, such as iron ore, copper, and crude oil, authorities were on high alert when raw material prices soared earlier this month. When the prices rose – the government intervened, causing prices to plummet. However, the entire fiasco has established just how dependent China is on Australian raw materials.

Jinping’s tariffs against countries like Australia, his onslaught on the steel sector, his personal wars with the private sector, all amid a pandemic are proving to result in a roller-coaster ride for China’s financial systems and markets. China is going through a vicious cycle of economic crisis. Xi Jinping has taken it upon himself to bring a mountain of crisis on the Chinese economy, and the effects are now becoming more than visible.

American leftist media dismissed Donald Trump’s lab leak claim as a joke. Now they are forced to admit that they were wrong

‘You are going to be very uncomfortable,’ Russia sends warning to Biden ahead of meeting with Putin