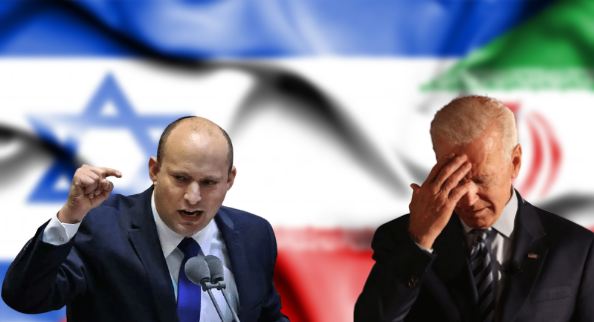 Backstabbing Israel, the United States of America under its Democrat President Joe Biden has started pressurizing the middle-eastern nation to stop its bombing activities on Iran’s nuclear facilities. Ahead of the Vienna Nuclear talks to decide the fate of Tehran, the USA’s remarks suggest that Biden and Co. have made up their mind to re-join the Joint Comprehensive Plan of Action (JCPOA) deal.

Officials associated with the matter were quoted as saying by Jerusalem Post, “American officials have warned their Israeli counterparts that the repeated attacks on Iranian nuclear facilities may be tactically satisfying, but they are ultimately counterproductive.”

However, giving a stiff middle finger to the US, Israeli officials remarked they have no intention of letting up, waving away warnings that they may only be encouraging a sped-up rebuilding of the program.

Israel and Iran are fierce enemies. Iran talks of wiping Israel from the world map. On the other hand, Israel vows not to let Iran get its hands on a nuclear bomb. Israel has approved a $1.5 billion budget to be used to prepare the military for a potential strike against the Iranian nuclear program. The budget aims at financing developing aircraft, intelligence-gathering drones and unique armaments, which would be needed for bombing the Iranian nuclear program.

Reported extensively by TFI, American President Joe Biden has been pushing to revive Obama’s brainchild- 2015 signed JCPOA, or what is more commonly known as the Iran nuclear deal.

The Democrat propaganda has been that Trump’s ‘maximum pressure’ policy against Iran has failed and that Biden’s negotiations with Tehran would succeed.

At the outset, Trump understood how Iran was never serious about its commitments with world powers under the JCPOA. The 2015 Iran nuclear deal allows Tehran to keep a maximum enriched uranium stockpile of 447 pounds, but even today, Tehran continues to increase its stockpile despite protest from the International Atomic Energy Agency (IAEA).

The Democrats somehow kept fooling themselves in the hope that Iran will honour its JCPOA obligations. Trump, on the other hand, understood that the Iranian government can’t be trusted and decided to unilaterally walk out of the JCPOA in May 2018.

Trump had to withdraw because he knew that if Iran acquired a nuclear bomb then the Middle East would face an impending security crisis. Still, the Republican leader avoided any military intervention in Iran.

Trump did not allow even Iranian General Soleimani’s assassination to escalate into a violent face-off between Tehran and Washington. After withdrawing from the Iran nuclear deal, Trump decided to reinstate economic sanctions against Iran in November 2018.

Before his eventual ouster from the White House, Trump had seemingly brought Iran to its haunches and the Shi’ite country’s ambition of developing a nuclear bomb, all but seemed over. However, since Biden has come to power and openly flaunted his love to go back to Obama’s hara-kiri JCPOA, Iran has upped the ante.

Read More: Biden’s reversal of Trump’s Israel policy is a disaster in making and can turn the Middle East into a searing inferno

With Biden in power, Iran has upped the ante to develop the atomic bomb

As reported by TFI, salivating at the prospect of a weak US leader who is desperate to ease down the sanctions imposed by Trump — Iran has resumed the operation to enrich uranium to up to 20 per cent purity, to develop the nuclear bomb. History has taught us that even when the JCPOA was in force, Iran continued to develop its nuclear arsenal covertly.

The Democrats under Biden, by hook or crook, want to vindicate their predecessor’s policy and somehow reduce dependency on Saudi Arabia and Israel by teaming up with Iran. The idea appears suicidal at the outset but the Democrat party is adamant that Iran will hold its end of the deal and stop making the nuclear bomb.

Read more: A fuming Netanyahu and an angry MBS – Why the USA will lose both Saudi and Israel together

The title sparked an outcry online, including among Republican lawmakers, and was quietly changed back to ‘US ambassador to Israel’ after a few hours.

By adding both regions separately in the Twitter handle – a signal was inadvertently sent by Joe Biden and his team that Democrats were doing a volte-face on Trump’s policy by bringing back Palestine on USA’s agenda and playing into the hands of Hamas and Hezbollah terrorists. Thus ratcheting up the Iran Nuclear deal doesn’t come as a surprise.

Israeli-American relations had touched a low point toward the end of the Obama presidency, in large part due to Netanyahu’s clashes with the Obama administration over the Iran deal. And the relations have been off to a shaky start in Biden’s first year in the office as well. It is not a coincidence that whenever relations with Israel have taken a tumble there has been a Democrat President in the office.