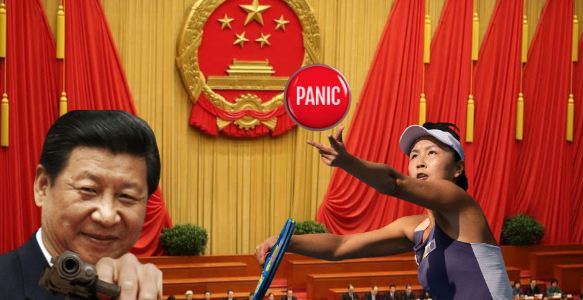 Peng Shuai – Forced disappearances are common in Xi Jinping’s China. This is the most common tactic used by China to suppress uprisings, weigh down anti-CCP movements and instil fear among the masses.

So, earlier this month when China’s world champion Tennis star, Peng Shuai, levelled allegations of sexual abuses against former Vice Premier Zhang Gaoli; China responded by doing what it is best at—Chinese authorities detained her, restricted her access to Chinese social media and launched a fresh crackdown on the brewing #MeToo movement in China. But this time, China’s move to force disappear a public figure backfired tremendously.

From the Women’s Tennis Association to the world’s famous tennis players and from human rights groups to several athletes’ lobbies took the CCP by its devilish horns to seek the answers on Peng Shuai’s well-being and whereabouts.

Tennis players like Naomi Osaka, Serena Williams and Novak Djokovic turned their profiles into power against the communist party. Retired players and world tennis bodies also entered the fray, and eventually, the calls of releasing Peng Shuai morphed into a massive anti-CCP movement on the world stage.

Peng Shuai has become a lethal anti-CCP force today, prompting Chinese media to unleash deadbeat propaganda to bust the “myth” of her disappearance. China’s Propaganda in chief, Hu Xijin, has released eight back to back videos and photos of Peng Shuai, in his bid to address the concerns of her safety. But the world is still adamant about not buying the CCP’s claims.

Why Peng Shuai is an existential threat to the CCP?

But the CCP’s predicaments are not limited to Peng Shuai’s disappearance case. The unprecedented support that has poured in for Peng Shuai’s release is alarming for the CCP, especially because it could very well spark a chain reaction in China, where other victims of the CCP’s tyranny may soon find it harmless to speak up and tell their own stories.

A China that is running helter-skelter to defuse the Peng Shuai bomb, would find it perilous to deal with tons of such cases.

China pre-emptive strike on its celebrities

So, it is now scrambling to tighten its grip over the online information of celebrities, to prevent another Peng Shuai from barraging the CCP with similar allegations. The Cyberspace Administration of China on Tuesday said this was aimed at creating a positive and healthy environment on the internet.

This means that publishing or writing anything about a celebrity will invite harsh scrutiny from the CCP, rendering the job of reporting on the personal lives of public figures extremely dangerous and treacherous.

2021 is a politically hot year in China. Xi Jinping’s rivals are hunting for the best opportunity to stymie his efforts to become a leader for life in Chinese politics. At such a critical juncture, the CCP fears that many more Chinese celebrities, backed by Jinping’s rival factions, may go up in arms against China’s oppressive regime.

Women lead the charge against the CCP

Make no mistake, Peng Shuai’s case has already rekindled the #Metoo movement in China, where women are now shying away from shouldering responsibilities of raising children and families. China’s birth rate was reported below 1% in 2020, which was the lowest in 43 years. Some believe it is Chinese women’s way to register their protest against the CCP.

So, a frustrated China is now making sure no other Peng Shuai is ever able to narrate her heart-wrenching story to the masses at home or abroad. But considering growing infighting in the higher echelons of the Chinese Communist Party, Xi Jinping’s dreams of cracking down on resenting voices may very well end in tatters, resulting in the creation of a hotbed for anti-Jinping movements across China.