We foretold that China would split ASEAN into two groups. It has almost succeeded 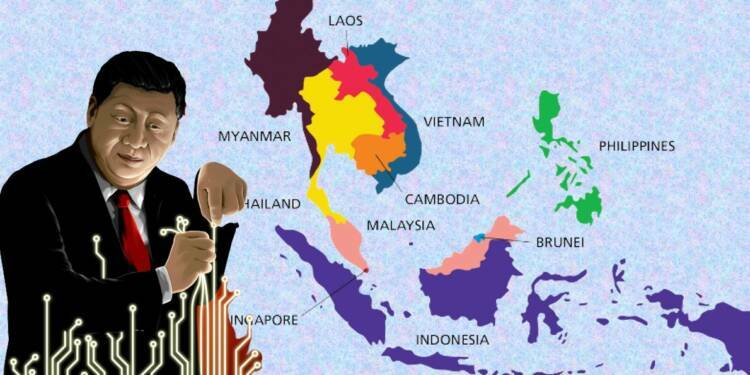 China is a great disrupter. A disrupter that is allergic to peace, unity and harmony. Its influence is an enduring, if not incurable disease – a disease that has now plagued the ASEAN in its entirety.

In the past decade or so, China has tightened its grip over some ASEAN nations in an aggressive manner. Banking on easy loans and its predatory trade practices, China has cemented itself as the most influential player in the Southeast Asian region.

Also read: Solomon Islands is at the verge of a massive civil war over China and Taiwan

China’s way or the highway:

Its influence has grown up to a level where Beijing now doesn’t shy away from even interfering in ASEAN’s internal affairs. For instance, China wanted ASEAN to allow the Burmese military leader to attend a recently held summit between ASEAN leaders and Chinese president Xi Jinping.

However, other ASEAN nations expressed their vehement displeasure over China’s demand, following which China agreed to conduct the meeting in Myanmar’s leader absence. On Monday, however, the nine ASEAN countries agreed to China’s proposal that Myanmar’s ambassador to Beijing, U Myo Thant Pe, serve as the bloc’s representative.

ASEAN alleges that Myanmar’s military leadership has not done enough to end violence and chaos in the country after military overthrown the civilian government on February 1. Last month, ASEAN blocked the military leader from attending an annual summit on the same grounds.

Myanmar, Laos and Cambodia- the drivers of China’s hegemony in the region:

If the trend continues, it won’t be long before China becomes the only influential player in the Myanmar’s affairs. Thanks to sanctions from the west, Myanmar is close to getting ostracized on the world stage. Countries like India and Japan, however, have tried to engage the military leadership, but China’s influence remains unparalleled.

Apart from Myanmar, China’s influence in Laos and Cambodia has also reached staggering levels. Laos’ external debt was approximately $9.9 billion in December 2019 just before the Covid-19 outbreak, compared to $18.9 billion in GDP for the same period. Out of this external debt of $9.9 billion, almost $5.9 billion is the amount that Laos has incurred as loan to build the Vientiane-Boten railway project that will link its capital to China’s Kunming as part of the BRI project.

And Cambodia is no different. Cambodia has a foreign debt of $9 billion, with China accounting for more than 40% of it. Cambodia’s outstanding external debt surpassed $9.18 billion in the first half of 2021, and is likely to surpass $10 billion by the end of the year, up from $8.8 billion at the end of 2020.

ASEAN under Cambodia – icing on the cake for China:

Now, the next chair of ASEAN will be Cambodia, a de facto lackey of China. With this, Beijing is going to increase the mistrust, by expanding economic, social and territorial ruptures within the block, ultimately dividing it into two warring factions. These divisions will make it easier for the CCP to manage the region for its benefits.

Geopolitical importance of ASEAN is best summed up by the following quote, “The road to the dominance of Indo-Pacific goes through South-East Asia, making it the factor for dominating Asia in the Asian Century”. The fact that the region geographically regulates trade to and from the whole of east Asia, makes it a region worth controlling for China.

China on the verge of driving wedge through ASEAN:

A divided ASEAN on the other hand becomes a worthy prospect for a better control from Beijing. Some of the member nations realise this, like the Philippines, however remain helpless. Going ahead, China is going to utilise these differences to divide the grouping into its weaker sub sets. And it’s already getting some success.

Myanmar’s representative to ASEAN bloc is a Chinese stooge, to which even ASEAN has agreed to. Also, China’s abundant influence in Laos, Cambodia and Myanmar makes it easy for China to wield influence over the Mekong region. China already controls the flow of Mekong River, and the burgeoning influence in the Mekong countries will render the region waterless and politically neutered to stand up to China’s misconduct.

And now, Cambodia is scheduled to lead the organisation, at a time when the organisation is finding it difficult to hold itself together. It is only going to make things easier for China to divide the bloc into two warring factions.