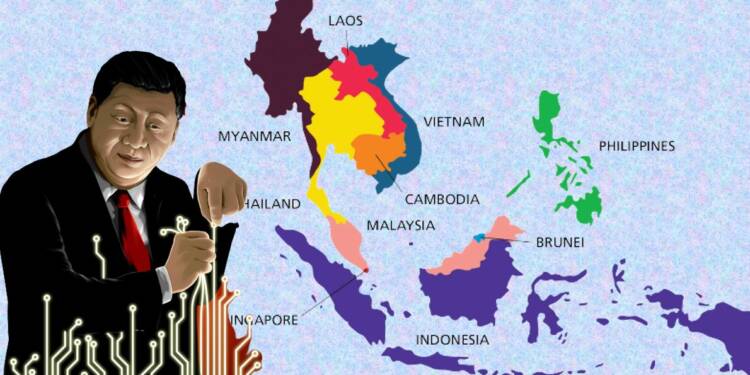 Since its start in 1967 until today, ASEAN has grown to heights that few could have dreamed of. If the rise of China as an economic behemoth fascinates you, then ASEAN’s trajectory is no less fascinating. However, the organization has been facing a lot of issues in the recent times; the Coronavirus pandemic-led economic decline has increased the country wise economic disparity among the member nations. In addition to this, the current civil war situation in Myanmar and the increasing difficulty in reaching consensus regarding its participation in ASEAN forums have brought credible threat to the stability of ASEAN. As per reports, Myanmar Military Chief has been banned from ASEAN summits.

All this while, its larger neighbour China has been consistently increasing its sway over the region, as well as its control. Be it the Belt and Road Initiative (BRI), debt trap, creating artificial islands in south China Sea, infringing on the litoral territories of ASEAN member countries, and the list goes on and on. The Mekong countries are less well to do and have way less GDP when compared to the Island economies like Singapore, Indonesia, Malaysia, and Philippines.

Now, the next chair of ASEAN will be Cambodia, a de facto lackey of China. With this, Beijing is going to increase the mistrust, by expanding economic, social and territorial ruptures within the block, ultimately forcing it into two warring factions. These divisions will make it easier for the CCP to manage the region for its benefits.

ASEAN’s soft stance towards China and conflict within:

Now, even in the face of CCP‘s (Chinese Communist Party) aggressive posturing and in some cases singlehandedly claiming territories (and even seas), there have been mixed reactions among ASEAN nations. While time and again leaders of QUAD in different settings called for the importance of ASEAN centrality in the Indo-Pacific and increased their respective nations’ engagement with the southeast Asian nations, ASEAN has only used it as security leverage to increase its business with China.

Recently, during the bloc’s meeting with Chinese Premier Li Keqiang on Tuesday, the prime ministers of Malaysia and Singapore expressed their willingness to attend the November summit. And this came at a time when China is chipping away the sovereignty of the ASEAN member nations and its economic policies are hurting the markets even in Singapore.

Geopolitical importance of ASEAN is best summed up by the following quote, “The road to the dominance of Indo-Pacific goes through South-East Asia, making it the factor for dominating Asia in the Asian Century”. The fact that the region  geographically regulates trade to and from the whole of east Asia, makes it a region worth controlling, for China. A divided ASEAN on the other hand becomes a worthy prospect for a better control from Beijing. Some of the member nations realise this, like Philippines, but remain helpless. Going ahead, China is going to utilise these differences to divide the grouping into its weaker sub sets.

Also read: China is now at the mercy of ASEAN nations as Australia goes all guns blazing

The basic algorithm or modus operandi followed by the CCP can be loosely defined as follows:

Based on this algorithm, ASEAN is in the 4th stage with Laos and Cambodia now kowtowing to the communist nation. In addition to this, the larger economic disparity in the region can make other member nations join the club of Laos and Cambodia.

And now, Cambodia is scheduled to lead the organisation, at a time when the organisation is finding it difficult to hold itself together. Going ahead, we can expect a more involved China, via Cambodia, working to bifurcate the organisation by feeding the flames of divided opinions and differing interests, into two warring factions.