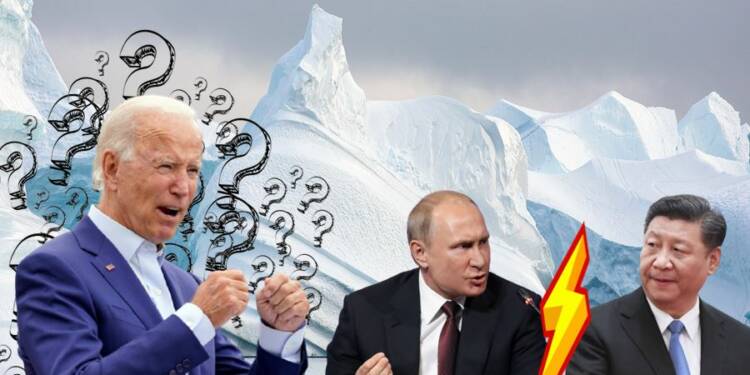 Few areas have sparked as much speculation, enthusiasm, and broad statements, as the Arctic region did around the turn of the 21st century. The Arctic, which was thrust onto the public radar a decade ago by flag-plantings and resource appraisals, continues to entice academicians and journalists to venture northward in quest of “the next great game.” China and Russia are fighting it out to make sure who has the strategic edge in the future trade routes as well as who controls the majority of resource-rich zones in the region.

While the international community and the analysts are trying to make the world understand the immense geopolitical importance of the Arctic, it still remains out of the radar of Joe Biden and his administration. Admiral Karl Schultz, the Commandant of the United States Coast Guard, is among those who believe that “presence equals impact in the Arctic.” Despite this, the US possesses only one heavy icebreaker, the CGC Polar Star, and one medium icebreaker, the CGC HEALY, which is mostly utilised for marine science research. Neither is capable of being used for year-round ice-breaking activities in the Arctic.

China’s one-upmanship of the USA in the Arctic:

China is in a position to have a greater presence in the Arctic than the United States for some time, thanks to its annual deployment of icebreakers and other research boats to the region, as well as significant scientific and commercial investments in the region. Many people refer to the US’ strong Arctic connections and claim that the USA’s strength lies in it’s cooperation with like-minded Arctic partners, five of whom are NATO members. USA’s Arctic friends, on the other hand, are not immune to Chinese interests in the region, and many appear to embrace China’s expanded position as an investor and scientific collaborator in the Arctic, making any cooperation with the USA of no economic utility.

Also read: Russia gears up to chase Chinese fishing fleets out of Arctic and the Russian Far East

While the issue of figuring out a viable bridging strategy reached the highest levels of government in the Trump administration, when they published a 2020 Memorandum on “Safeguarding United States National Interests in the Arctic and Antarctic Regions,” it could not fructify because the Biden administration paid no attention to the issue. They directed the inter-agency to come up with solutions to rapidly enhance surface icebreaker presence at both poles, according to the memorandum. Unfortunately, like so many other achievements in the previous administration, they were squandered by their Democratic successors in the Biden administration.

While the Biden administration is sleeping on the new front that is shaping up in the Arctic, Moscow and Beijing are competing extensively in the region.

Russia and China – a 21st century competition for Arctic supremacy:

The Arctic is becoming more accessible to transportation, trading, and commercial activity, as climate change and global warming melt the polar ice cap. The new Arctic shipping routes are expected to cut the journey between Europe and Asia in half. As an Arctic state, Russia should ideally have access to the new maritime routes to Europe, but China is attempting to derail the process, which is why the Arctic Council appears to have intervened.

In reality, Russia has made no secret of its desire to trade and transport goods in the Arctic. When hundreds of ships and tankers got jammed up in the Suez Canal earlier this year, Russia made a big attempt to remind Europe about the utility of the Arctic and Russia’s Northern Sea Route in the region.

In 2020, the Northern Sea Route shipped 33 million tonnes of cargo, which pales in contrast to the Suez Canal‘s daily cargo throughput of 3 million tonnes. However, with the rise in cargo quantities and with the problems that the Suez Canal situation created, the need for additional routes should be highlighted. Given this background, the Arctic is certain to become a key trade route sooner or later. The Russian Energy Ministry said, “The northern sea route . . . has high potential in expanding the cargo transportation volume, allowing to significantly cut the duration of goods transportation from Asia to Europe.”

On the other hand, China calls itself a near-Arctic state and has announced its Arctic Policy, that includes plans for several commercial and military activities in the region. It is looking to build the Polar Silk Road, a plan to extend Xi Jinping’s flagship Belt Road Initiative (BRI) into the Arctic. North American and Arctic Defence and Security Network released a report stating, “China’s growing power and resource needs are drawing its attention farther from home. Though initially centred on Eurasia, the BRI has been expanded to include Africa, Latin America, and the Arctic.”.

While all these developments taking place, Joe Biden has been sitting on the Trump era 2020 Memorandum on “Safeguarding United States National Interests in the Arctic and Antarctic Regions.” While he may be interested in playing petty politics, this is going to have a really consequential impact on the USA’s power ranking world over, and it will make sure that the US never becomes an Arctic power even with Alaska giving it a betting space.