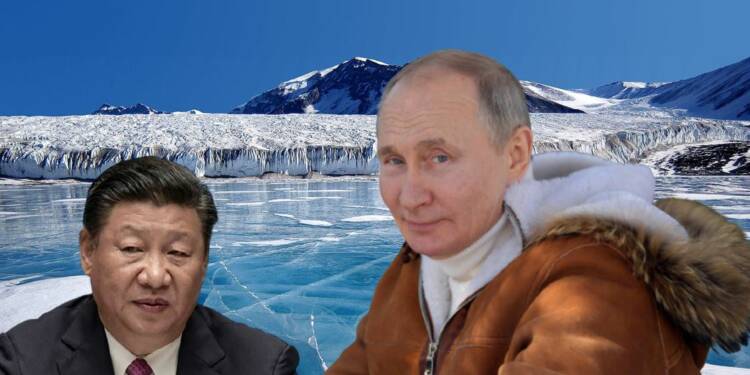 Russia v China in the Arctic – Chinese expansionism has faced a major setback as Xi Jinping‘s desperate plans to pass off China as a near-Arctic State and enable commercial activity in the ecologically fragile region have been foiled by the Arctic Council.

It is Russia v China in the Arctic:

With climate change and global warming melting the polar ice cap, the Arctic is opening up to transportation, trading and commercial activity. The new shipping routes opening up in the Arctic are supposed to shorten the distance between Europe and Asia.

Ideally, Russia, being an Arctic State, should have access to the new shipping routes towards Europe but China is trying to play spoilsport and this is why the Arctic Council seems to have got involved.

In fact, Russia has been consistently asserting its trading and transportation ambitions in the Arctic. When hundreds of ships and tankers got jammed up in the Suez Canal earlier this year, Russia made a big attempt to remind Europe about the utility of the Arctic and Russia’s Northern Sea Route in the region.

The Russian Energy Ministry said, “The northern sea route . . . has high potential in expanding the cargo transportation volume, allowing to significantly cut the duration of goods transportation from Asia to Europe.”

In fact, Russia has been pitching the Northern Sea Route as an alternative to the Suez Canal for at least ten years now. In 2011, Vladimir Putin had said, “The shortest route between Europe’s largest markets and the Asia-Pacific region lie across the Arctic. This route is almost a third shorter than the traditional southern one.” He had added, “I want to stress the importance of the Northern Sea Route as an international transport artery that will rival traditional trade lanes in service fees, security and quality.”

On the other hand, China calls itself a near-Arctic state and has announced its Arctic Policy that includes plans for several commercial and military activities in the region. It is looking to build the Polar Silk Road, a plan to extend Xi Jinping flagship Belt Road Initiative (BRI) into the Arctic.

North American and Arctic Defence and Security Network released a report stating, “China’s growing power and resource needs are drawing its attention farther from home. Though initially centred on Eurasia, the BRI has been expanded to include Africa, Latin America, and the Arctic.”.

As per The HK Post, China is interested in establishing its own navigation routes through the Arctic, because that will reduce the distance between Shanghai and Western Europe by two weeks and save 30 per cent of travel time taken in the traditional route that passes through the Strait of Malacca and the Suez Canal.

Also read: Maybe the world hasn’t noticed it yet but Russia has blocked China’s all three entrances to the rest of the world

China is probably also motivated to get into the Arctic because of its ‘Malacca dilemma’. The Strait of Malacca is a narrow passage of water connecting the Indian Ocean and the Pacific Ocean. Chinese cargo ships exporting goods to the Middle East and Europe have to pass through this route. Much of the hydrocarbons import into China also comes via the Strait of Malacca.

However, India, one of China’s main enemies, is has a geostrategic advantage in the region. It can surround the Western end of the Strait of Malacca and impose a naval blockade, if relations deteriorate between New Delhi and Beijing. So, China finds it convenient to find an alternate trade route and avoid the Strait of Malacca.

The Arctic Council has expresses concern about growing Chinese ambitions:

Arctic Council has raised concerns over growing Chinese ambitions in the region. The Arctic Council is a group of eight nations – Canada, Denmark, Finland, Iceland, Norway, Russia, Sweden and the United States. These countries are, of course, the ones who share an Arctic coastline. They don’t care about China’s self-acclaimed status as a ‘Near Arctic State’.

China is only an observer in the Arctic Council and even the observer status was initially opposed by Russia. In any case, Russia is now using all its influence to kick China out of the Arctic. Earlier this year, Russia assumed the role of the chair of the Arctic Council, a two-year rotating position. This means that Russia can call the shots at the council, whose function is to promote cooperation amongst the Arctic States and to uphold their interests.

What the Arctic Council has stated is thus Russian President Vladimir Putin’s warning to Xi Jinping – you are not welcome in the Arctic. So, please get out of here.

Russia and the US to join hands against China:

Russia and the US are the two main powers in the Arctic Council. So, if the high-level intergovernmental group is saying something, it means that both Moscow and Washington, D.C. want to say that.

Recently, the US 2nd Fleet Commander Vice Adm. Andrew “Woody” Lewis  suggested cooperation with Russia in the Arctic, apparently for the purpose of squashing China’s dreams of dominating the ice-capped region as a so-called ‘near-Arctic’ state.

The US understands that what Russia demands is primacy of the Arctic States in the Arctic and is only pushing back against Chinese influence in the region. So, Russia’s Arctic policies aren’t really a threat for the United States. Even if the US and Russia have to compete in the region, they should first kick out China and then compete between themselves instead of letting an outsider intervene.