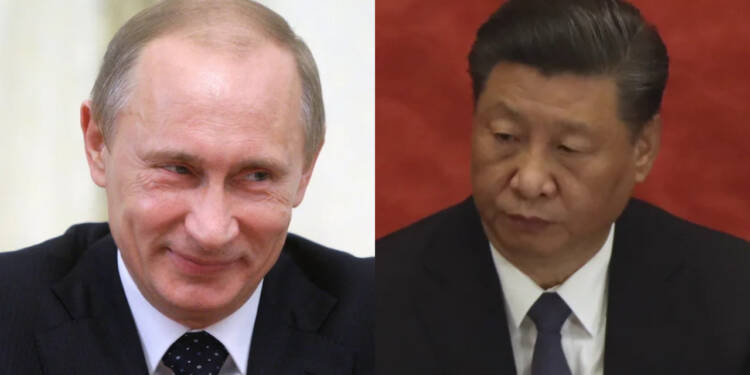 Russia’s President Vladimir Putin continues to claim that he shares his Chinese counterpart’s so-called vision for multilateralism. Especially after Joe Biden’s controversial poll victory last month, the Putin administration has been warming up to China at a diplomatic level. Yet, Russia continues to perceive China as a threat and wants to check the paper dragon’s growing influence. At a strategic level, Russia is working against China’s interest.

Russia is trying to block Xi’s ambitions of connecting China with the oil-rich Arab and African nations, as well as the lucrative European markets. China has three routes to reach the Arab and the Western world if we presume that Xi’s Gwadar port plans will fail because of all the problems that the China–Pakistan Economic Corridor is facing. Interestingly, Russia is making its presence felt in all these three regions- the Arctic, the Strait of Malacca and Central Asia.

This is the present route for Chinese trade with the Arab region, as well as Europe. But China wants to diversify, because the Strait of Malacca is a strategic chokepoint in the Indo-Pacific, connecting the Indian and Pacific Oceans. 80 per cent of China’s oil imports pass through the South China Sea via the Strait of Malacca.

New Delhi, on the other hand, has been stepping up the pressure against China. India has been militarising the Andaman & Nicobar Islands close to the Strait of Malacca, and given the fragile Sino-India ties, Beijing remains wary of India’s ability to block the Strait of Malacca at will which would literally choke the paper dragon.

Xi Jinping’s flagship Belt and Road Initiative (BRI) has become the fulcrum of China’s foreign policy and soft power display today. But when launched, it was merely a transportation project to connect China with the rest of the world. As such, Central Asia continues to figure at the top of Xi’s BRI agenda.

If Xi has to reach the oil-rich Arab region and European markets, he will have to keep investing heavily in the five Central Asian Republics- Kazakhstan, Kyrgyzstan, Tajikistan, Turkmenistan, and Uzbekistan. But it is not so easy. Central Asia is a part of the former Soviet world, and Moscow still considers its privileged sphere of influence.

In fact, Putin doesn’t like how China eats into Russian space. The Kremlin has even started funding anti-China research of sorts, regarding Central Asia. So, when China tried to stake claim over half of Tajikistan, Russian media outlets did seem to have got irked. Similarly, Kyrgyzstan, which remains politically influenced by Russia, witnessed a major regime change recently that can now jeopardise BRI investments in the Central Asian country.

The Arctic is the most futuristic route in Xi’s vision to connect China with West Asia and Europe. The resource-rich Arctic is presently a snow-covered region without much potential for maritime trade. But global warming is melting the polar ice caps and a few decades down the line, the region is expected to open up for shipping activity.

China feels that the Arctic can be its shortcut to solve the ‘Malacca dilemma’. So, the paper dragon calls itself a “Near-Arctic State”, though it is a different matter that China is as far away from the Arctic as Poland. Russia however doesn’t buy China’s “Near-Arctic State” rhetoric. In fact, the Putin administration strongly asserts the primacy of eight Arctic countries, including Russia itself, in the region.

Of late, Russia has tested a hypersonic missile in the Arctic and an anti-satellite missile, which presumably focuses on the Arctic region. The Putin administration has also restored a Soviet-era facility for testing small weapons in extreme Arctic conditions.

So, Russia may not antagonise China publicly, but it has definitely blocked China’s three routes to the rest of the world along with Xi’s ambitions to make the paper dragon a true superpower.