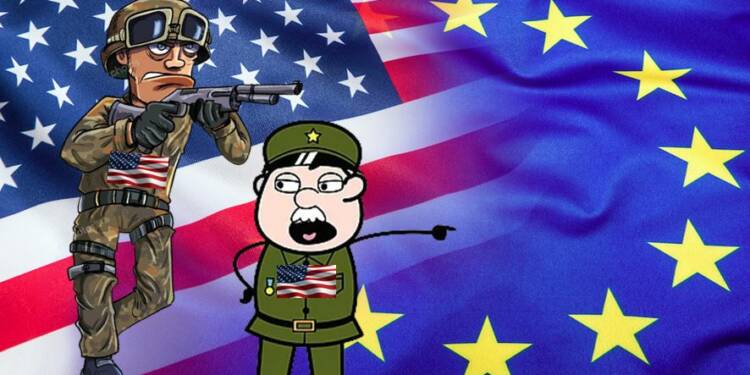 The continent of Europe has been the progenitor of modern warfare, and since the 19th century, as industrialisation picked up, it became a laboratory of testing these lethal weapons out. The best examples of which, were the two World Wars, which were mostly a tussle among the great powers of Europe. However, since the start of the cold war and to this time, the European continent and the European Union have been heavily dependent on the US security umbrella. However, the devastation of the world wars have been over for a long time, and the continent remains the most developed – this begs the question: why does the US still keep the EU militarily weak and dependent on itself?

Europe’s dependence on the United States for its security has given Washington a de facto veto over EU defence proposals. This means the US can use the European Union as its extended arm when it comes to decisions of strategic and defence requirements. The stakes of US hegemony in the world has so much dependence for its control over European military needs, that when the calls for a European Army were gaining ground, the US had made it clear that its European partners must choose between either the EU Army or NATO.

These threats (and the overarching belief that the US will come to the rescue when the need arises) kept the organisation dependent on the US and thus its capabilities veined in contrast to the US. However, today’s USA does not bring enough confidence in its EU partners that it will show up at the time of need.

The US wants to keep the EU military and its defence industrial complex weak, as this helps Washington maintain its sway over the lucrative European rich markets for defence purchases. It also keeps the EU in check so that the organisation does not drift away from the larger global US geopolitical interests and be the tool to keep US global heft in place.

However, the actions of the Biden administration in the realm of foreign policy have been so counterproductive, that they have created some serious discussions regarding the EU’s dependence on the US.

Also read: The end of the Roman Empire has many similarities with present day Europe and USA

The USA’s haphazard withdrawal from Afghanistan has left European allies fuming over what they perceive to be a lack of consultation. In addition to this, tensions with France over the Australia–United Kingdom–United States (AUKUS) submarine deal, have heightened European concerns that Washington has embraced the “pivot” to Asia, and its priorities are shifting away from Europe, as well as the Middle East and North Africa.

While President Joe Biden’s commitment to NATO’s Article 5 pledge—to treat an attack on one NATO member as “an attack against them all”—remains unwavering, polling suggests that Americans’ appetite for military intervention to resolve conflicts in Europe’s broader neighbourhood has waned in recent years on both sides of the political spectrum. The European Union will conduct a defence summit in the first six months of 2022, during France’s upcoming presidency of the bloc, according to European Commission President Ursula von der Leyen.

The rising views in favour of an EU Army:

With the EU looking for a structure in the absence of the US, any possibility of a NATO army dies. Therefore, the current atmosphere of international geopolitics has brought back an old and partially forgotten demand for an EU Army. Despite years of fruitless debate and opposition from member states, the EU’s foreign policy leader has stated that the US withdrawal from Afghanistan will “catalyse” the establishment of the EU’s own permanent military force.

Josep Borrell, the EU’s high representative for foreign affairs, said during a meeting of EU defence ministers, that the time has come to build an active EU expeditionary force, which some top European politicians have referred to as an army.

In a tweet on September 2, German Defense Minister Annegret Kramp-Karrenbauer said that “coalitions of the willing” may act following a “joint decision of all” EU states. In November, AKK, as she is known, wrote an opinion piece for Politico, stating that “illusions of European strategic autonomy must stop,” and that “Europeans will not be able to replace America’s important role as a security provider.”

The general mood in Europe is one of shock, as the international status quo appears to be disintegrating. The EU pledged in 1999 to establish a force of 50,000-60,000 soldiers capable of being deployed in 60 days. The bloc formed a network of two “battlegroups” in 2007, each with 1,500 men. Since then, they’ve been languishing.

The current conditions, however, have sparked arguments about an EU Army, the details of which can be explored independently. Now as the summit of defence is announced to be next year, it will catalyse the EU’s transformation into a military bloc, and the US may not be too kind on this development. But, the changing geopolitical realities will make sure that the EU will not be militarily weak.