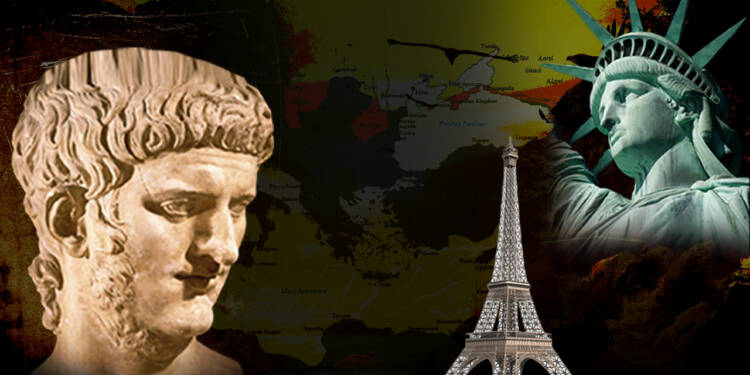 The Roman Empire was, by all estimates, one of the greatest and the mightiest empires to have existed on the face of the planet. It was invincible, undefeated during its glorious existence, prosperous and led the world by example. For many at the time, it was the pinnacle of human civilisation. But guess what? The Roman Empire is nowhere to be found now. Like all empires and civilisation outside the Indian subcontinent – the Roman Empire also perished. What was once considered a divinely ordained empire began crumbling and was brought to its knees somewhere around 476 AD.

The Roman Empire dug its own grave when it decided to grow a large heart, and out of its magnanimity, started trying to coexist with ‘cultures’ and ‘ethnicities’ unfit for civilisation back in the day. What Rome did back then, the West is doing now. The United States of America and Europe are scripting their own downfall, or dare we say, ruin. What engulfed the Roman Empire is what has come to plague the West. Rome fell due to what was ‘Woke’ back in the empire’s days. The U.S. and Europe are today grappling with an even more advanced version of ‘Wokeness’, due to which the lines between sanity and insanity have been blurred like never before.

Once upon a time, the Roman Empire was one of the mightiest empires on earth. It commanded an army so huge that there were very few parallels to it. Yet it fell. The fall of the Roman Empire is a highly debated topic in the academic circles.

The fall of the Roman Empire is a highly debated topic within academic circles. But most agree on four basic reasons: Decay owing to general malaise; Monocausal decay; Catastrophic collapse and Transformation. The Roman Empire ruled over a vast tract of land. It was by and large well-governed and there were few resistances. Rebellions were crushed easily. The seeds of the collapse of the Roman Empire were sowed in what is called the migration period. Around the 3rd century CE, Rome opened its gates for outsiders.

Rome had tangled with Germanic tribes for centuries, but by the 300s, “barbarian” groups like the Goths had encroached beyond the Empire’s borders. Goths could never settle in the empire properly and it led to two successful Gothic rebellions against the empire. It resulted in Goths occupying high seats in government as well as the armed forces.

The final blow to the Roman Empire, interestingly, was dealt by the Vandals in 455 AD, who raided “the Eternal City”, a year after which the Germanic leader Odoacer staged a revolt and deposed the Emperor Romulus Augustulus. There on, no Roman emperor would ever again rule from a position in Italy. The Roman Empire was thus erased from the map of the earth.

The West should ideally have taken a lesson from the fall of the Roman Empire. It seems to have taken none, which is why it is following a similar trajectory, and unless a major course correction is effectuated, America and Europe will not be able to save their fortunes.

The West has remained a dominant force for quite some time now. By colonising almost the entirety of the world, they grew at an exponential level. The industrial revolution furthered their advance. They hit two major roadblocks with the two world wars but their dominance continued. America became the clear winner, with a laggard UK with the rest of the Europe limping behind it. By the dawn of the 21st century, Europe had entered into a phase of decadence, the last stage of any empire. Germany, France and many more European countries opened their doors for outsiders who came with their ideological baggage.

The subsequent governments had to make adjustments for the sake of inclusivity and equity. The outsiders however unleashed a war inside Europe. Germany, France and UK are witnessing major pushbacks from Islamist forces from within. The USA – a country built by outsiders with its capitalism remained an ideal country for the world. It had watched the First World War from afar and burned its hands in the second. While it remained open for outsiders, it kept them at an arm’s distance.

It was, of course, soon to change and the huge influx of migrants changed the demographics of many of its states, leading to an inevitable change in its politics. The 44th president of the United States (like late Roman emperors) changed America irreparably. The 45th president – Donald Trump tried to turn America into an inward-looking country but was voted out of power for reasons best known to the voters of America. Today, the Ilhan Omars and Alexandria Ocasio Cortezs’ are openly calling the shots in the United States.

A wokeness tsunami has engulfed America and Europe. Quota systems to attain racial and religious equity are being chalked out, as meritocracy dies a slow death. Reverse racism is rampant in the West. Wokeness will be the final nail in the coffin of it – the end of the West as we know it. When one looks at it, the parallels between the fallen Roman Empire and the falling Western one are just too stark to ignore.

A departure from morals, faith and traditions and an overarching acceptance of deracinated far-left agendas, coupled with the enthusiasm to pump polarly opposite aliens into Western societies promises to bring about the death of the Western civilisation.