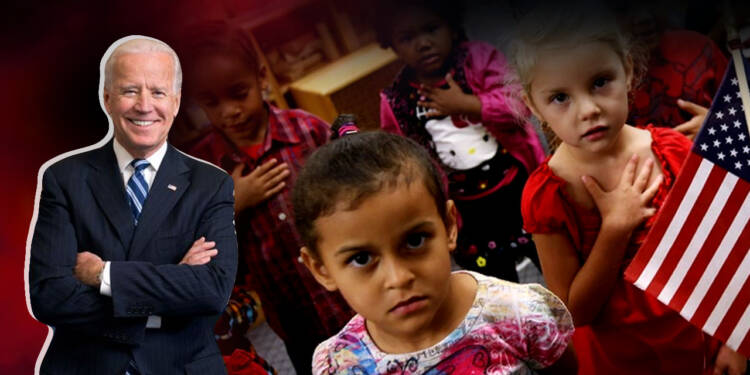 Woke America has gone berserk, and it is not even sparing children. Pushing its unusual political agenda on social concepts of gender and race, the ‘woke’ left has stooped so low that it is pushing its extremist ideas on children, no, not just the children but the tiny teeny toddlers. The Biden administration along with the ‘woke’ left has been pushing radical ideas on social issues such as race and gender.

Ever since the Biden administration assumed power, gender and race have been one of the major issues but the orders that are being pushed are extremist and radical. Even the people appointed by this ‘woke’ administration are radical and propagate gender-change operations in children. Race and gender are social issues and have a deep impact on society, which is now being corrupted with radical ideas of the left being shoved down the throat of the toddlers.

The fundamental problem is that woke America is propagating the idea of children having the right to decide on irreversible gender-change surgeries. When even the minimum legal drinking age in the US is 21, the Woke society wants children to freely undergo gender change like it’s a walk in the park!

The Washington Post recently published an article titled, “Social justice for toddlers: These new books and programs start the conversation early.” The article talked about how in this era of such repression over gender issues, it is best for parents to start the conversation about these issues as early as possible. How early, one might ask? Well, according to The Washington Post, it should be when the kids are still toddlers.

According to the series of experts quoted in the Washington Post, three-month-old infants should be taught about implicit bias, racial stereotypes and genders. In the article, parents were given a list of books, websites, YouTube channels and companies offering ‘woke’ material for babies and young children.

Author Natalie Jesionka, a Dalla Lana Global Journalism Fellow at the University of Toronto, was told by an expert, “Children develop implicit bias as early as three months old, and at four years old are categorizing and developing stereotypes.”

Another recommended, “Ensuring children have authentic connections to people from different backgrounds is likely to reduce bias.”

Jesionka wrote, “In the era of Black Lives Matter and #MeToo, many parents are wondering when the right time is to talk to their children about social justice. Experts say it’s never too early, and a new wave of tools and resources can help start the conversation.”

Another expert said, “It’s never too early,” but it seems that the expert has stretched the quote ‘never too early far too thin’. In implying that toddlers, who cannot even speak, let alone develop implicit ideas of gender and racial discrimination, these so-called experts are pushing their radical ideas, which will severely and negatively impact the upbringing of these children.

While this was just a radical article on gender by a woke American media house, the worse is yet to come. According to studies reported in the medical journal Pediatrics, a small but increasing number of teenagers and even younger children who believe they were born with the wrong sex are seeking help from their parents and physicians who provide them with sex-changing treatments.

Experts advise against using puberty-blocking drugs and hormones on adolescents and even it poses ethical concerns. And, it should raise ethical questions because the website cited an example of one of the patients, who was an 8-year-old girl who had announced, “I a boy,” when she was when just 18 months old. An 18-month-old declared that she is a boy and her parents decided that she needs puberty-blocking hormones when she comes of age.

It is the responsibility of the parent to not give added weightage to such realities of their children. They are kids and should be treated as such. They should be cared for and explained the realities of the world. It is the responsibility of the parents to show the real world to the children, and definitely not be consumed by the fantasies of a kid who is experiencing every little emotion for the first time.

But one cannot even blame the parents for such stupidity; the current US administration has consumed itself with the ideas of social justice on gender and race. It has even employed Social Justice Warriors such as Rachel Levine as an Assistant Secretary for Health and Human Services.

Rachel has advocated for hormone therapy and sex-change surgery in minors. She even warned parents not to implement ideas of gender on children and let children, who are essentially 5 to 6 year old, decide for themselves. The ‘wokeness’ has seeped into the institutions of the United States and threatens their upbringing.

The President himself has submitted to the cause of a ‘woke’ America, as he in his first week in office, signed an executive order which removed the idea of gender in sports and then his Democrat party pressed for the advancement of the Equality act. The Equality act ‘updates’ the law Congress passed primarily to combat racism, the Civil Rights Act of 1964, and adds sexual orientation and gender identity as protected classes akin to race.

The protection attributed to these woke ideas of the radical left is immeasurable. They have broken every fundamental concept of society and now push their radical ideas on children. But they are protected by the man in the White House himself. The opposition has been muted at best because President Joe Biden is an enemy of the societal norms that have existed for so long.

Xi Jinping now openly wants all the world’s data collected by Alibaba, Tencent and others