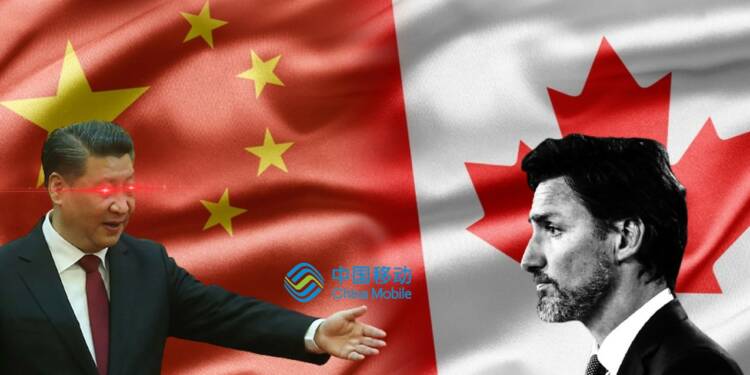 A Chinese company, having hefty stakes in the Canadian telecom sector, continued to carry out ‘business activities’ in Canada for six years without informing the Canadian government about it. And now when the Chinese company is caught red-handed and the Justin Trudeau government appears to break its sleepwalk on the issue; the China-backed company has dragged the Trudeau government to court, appealing against a government’s order that requires it to shut down its operations on Canadian soil.

The Chinese company of which we are talking about is China Mobile, the same company which got sanctioned in the US during the Donald Trump administration for having glaring ties with the Chinese military.

The company also had a significant presence in Canada, which had piggybacked onto Telus Mobility (Canadian operator) to provide its telecom services. Apart from Telus, the company also had strong ties with Huawei (also banned by the US) and the two Chinese companies had joint plans to work on the 5G venture in Canada.

Read More: If he wants to save Canadians, Trudeau must learn from Australia’s Morrison

How Trudeau administration nurtured its own threat:

Interestingly, the PLA backed Chinese company also managed to fleece the Canadian government by exploiting the Canadian Emergency Wage Subsidy (CEWS) program, an initiative to provide pandemic wage support to Canadian businesses. The program has so far processed $96.42 billion in claims and China Mobile has remained one of its many Chinese benefactors.

The amount credited in China Mobile’s bank accounts under the support program has not been disclosed due to policy restrictions. However, to put things into perspective, China Mobile posted a 3% increase in operating revenue after accessing Canadian wage supports. Despite the pandemic, the company witnessed its revenues go up by $4 billion from 2019.

How China Mobile came at odds with the government:

It is baffling to note how a Chinese telecom company, sanctioned in the US for having ties with the PLA, managed to get hefty wage support from the Canadian taxpayers, and that too without the Canadian government knowing any such company operating under its jurisdiction. Make no mistake, all foreign entities desiring for carrying out business operations in Canada require to notify the Canadian government under Investment Canada Act for apt security review.

As recently as August this year, the Canadian government in a security review found out that China Mobile’s presence could result in Canadian businesses being leveraged “for non-commercial purposes, such as the compromise of critical infrastructure and foreign interference, to the detriment of Canada’s national security.” So, it was ordered to disinvest in Telus and shut down its operations in Canada. However, this is not where the story ends.

Read More: China has poked Justin Trudeau in both his eyes and Trudeau has crumpled like a piece of paper

China Mobile fires back at Trudeau:

China Mobile vigorously push-backed and sued the Canadian government by alleging that the security review is “tantamount to speculation about what it may do,” such as using its access for “military applications or espionage.” CMI Canada also says that the Trudeau government was motivated, at least in part, by “the current political socioeconomic climate and the general biases against Chinese state-owned companies.” Interestingly, the court case filed by China Mobile is also being funded by taxpayers’ money under the Canadian legal aid program.

The episode perfectly embodies the extent to which Chinese companies have grown out to be disrespectful towards law of the land in Canada. Had the Trudeau government woken up from the slumber six years ago, Canada won’t be finding itself sailing in hot waters today. Indeed, it is Trudeau’s reckless foreign policy that has dangerously emboldened Chinese companies operating in Canada. Canada would be well advised to rid itself of such a grave security threat as soon as possible.