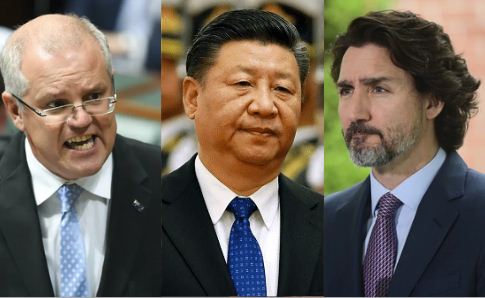 Being a Canadian citizen living in China is nothing short of a catastrophe nowadays. Politically motivated verdicts are being announced against Canadians like there is no tomorrow. Two Canadians have been severely punished by the Chinese courts in the last one week. Michael Spavor, who was arrested back in 2019 on spying charges along with Michael Kovrig, was recently handed over 11 years in Prison. The verdict also came for another Canadian citizen, Robert Lloyd Schellenberg, whose initial sentence of 15 years in Prison was shockingly superseded with a death sentence after Schellenberg pleaded for a retrial.

Undoubtedly, all these verdicts seem to be politically motivated. For instance,  Michael Spavor was detained in China just days after Meng Wanzhou, a senior executive at Chinese tech giant Huawei, was arrested in Canada after the US requested Canada for the same. Similarly, Robert Lloyd Schellenberg was sentenced to 15 years in jail just months before Meng’s detention, and as soon as Schellenberg went for a retrial, Chinese authorities got the opportunity to have their own way with his fate, and later accorded him the death sentence.

But, the same raw deal could be also served to Cheng Lei, a Chinese born Australian journalist who was detained a year ago on suspicion of illegally supplying state secrets overseas. Cheng Lei has been held in China for over a year now without sufficient details and transparency about the charges that led to her detention. Australian government is continuously pressuring the Chinese government to facilitate the detained Australian citizen with humane treatment and a just trail.

Cheng Lei’s fate could have been much worse, just like Robert Lloyd Schellenberg or Michael Spavor; however, thanks to Scott Morrison’s jaw-breaking response to the Chinese economic hostility, Chinese government has so far kept away from dealing an iron fist treatment to the Australian detainee.

China knows that Australia is not Canada which can be played around without having to deal with the ensuing repercussions.

Interestingly, in Australia’s case, it is China which has been dealt with an iron fist response after China went on an economic rampage against the Kangaroos last year. Australia was the very first country to demand an open and independent investigation into the pandemic origins that irked China to such extent that it announced hard economic measures against Australia without even considering the ensuing disaster that Xi Jinping had invited.

Morrison’s resolute and steadfast tough China policy has thrashed the living daylights out of the Jinping administration in the last year. Australia’s over-dependence on Chinese economy was what prompted the Chinese authorities to go all guns blazing after Australia, only to be found landed in hot waters later. Its cities went dark and industries got paralyzed without Australian coal. Chinese steel industry was in dire need of Australian iron ore that resulted in skyrocketing of iron ore prices providing Australia with decisive leverage over China in its trade war with the communist nation. When nothing worked, China resorted to deploy its wolf-warrior diplomats against Australia who incessantly and unapologetically hurled abuses on Morrison and his administration.

Chinese media went on to describe Australia as the “gum stuck to the bottom of China’s shoe” as the Morrison government refused to back down from calls for an investigation into the origins of the coroanvirus.

But again, it was China which got itself pricked after poking Morrison into the eyes. Australia vetoed a $107 billion BRI agreement with China sending shivers down the spine of the CCP. Like this was not enough, Australia is soon going to introduce a sanctions law similar to the US Magnitsky Act, to sanction the perpetrators of “egregious acts of international concern.” The move is believed to be aimed at Australia’s top rival China.

China is known for its gross human rights violation in Hong Kong and the western region of Xinjiang. Also, China has emerged as the biggest threat in the Cyber Security realm with thousands of cyberattacks being carried out by Chinese hackers every day. Moreover, China is also sporadically accused of proliferation of nuclear technology to North Korea and some West Asian nations. Hence, the law is astutely designed to target Chinese illicit actions without even mentioning China.

So, Morrison’s brutal crusade against China is the reason why Cheng Lei’s fate has been much better than her Canadian counterparts. But, what about Canadian Prime Minister Justin Trudeau?

Trudeau’s response to Chinese belligerence has been all about mere condemnation.

China is making it clear that it will crack down on Canadian nationals under its control if the Trudeau government extradites Meng Wanzhou to the United States. However, all that Justin Trudeau has managed to do all over again is condemn China. He said that Spavor’s conviction was “absolutely unacceptable and unjust”.

The Canadian Prime Minister added, “The verdict for Spavor comes after more than two-and-a-half years of arbitrary detention, a lack of transparency in the legal process, and a trial that did not satisfy even the minimum standards required by international law.”

Trudeau’s benign reactions are sending a clear indication to the CCP- you can keep sentencing Canadian nationals to long terms in prison or even death, and the Canadian government won’t mount any pressure on you apart from condemning such acts in a very official and formal language.

Justin Trudeau’s China policy has been so subservient that China did not even shy away from calling Canada a ‘running dog of the United States.’ In March this year, China’s consul general to Rio de Janeiro, Li Yang, derided Justin Trudeau in a tweet, blaming him for ruining friendly relations between the two countries. In the tweet, he had said, “Boy, your greatest achievement is to have ruined the friendly relations between China and Canada, and have turned Canada into a running dog of the US.”

Justin Trudeau, it seems, has a rather large appetite for taking insults by China lying down. It is almost as if the liberal Canadian government draws some sadistic pleasure by being derided by the paper dragon. Take for instance the Canadian cabinet of Justin Trudeau, along with the liberal Prime Minister himself, abstaining from a vote which aimed at declaring the CCP’s human rights violations in Xinjiang a ‘genocide’. While the entire cabinet of Trudeau abstained from voting, the resolution was passed with an overwhelming majority in the Canadian parliament.

Hu Xijin, Chief Editor of the state-owned Global Times newspaper of China, recently slandered Trudeau by calling him the governor of US State of Canada. It was not just the most comical of slanders, but was also immensely disrespectful to the Canadian citizens who do hold their nation and its sovereignty in high respect. But this also shows the level of concern the Chinese hold over the comments made by the Canadian Prime Minister and of Canada in general.

Trudeau, governor of US State of Canada, tried to interfere in China’s judicial system. He clearly knows that China despises his statement. pic.twitter.com/1rBJwSRt5H

However, the Canadian Prime Minister is simply not hitting back at China. And this is why China is fearlessly messing around with Canadian citizens in order to mount pressure on Ottawa on relation to Meng Wanzhou’s extradition case.

Hence, if Trudeau wants to save his country from further loss of face on the world stage by a provoking China, he must take a leaf out of Morrison’s unrelenting China policy.

Trudeau would be well advised to not let his personal admiration of the CCP become the reason for Canada being abused by China on a regular basis. China needs to be given taste of its own medicine while dealing with its hostile policy, and thus, every world leader, especially Trudeau, needs to look up to Morrison’s China policy to deal with the communist Tyranny in the most effective way ever.