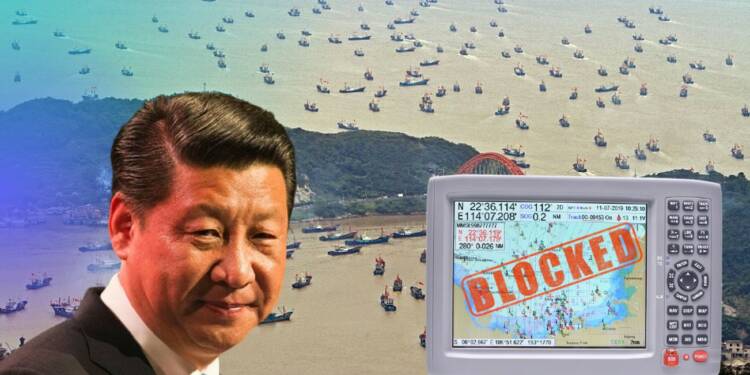 In an alarming development for the world’s shipping industry, China has started concealing the geo-location data of commercial ships flocking into China maritime boundaries. Essentially, for the captain of the ship, the road ahead is a dark one— pitch black. With insufficient data and increasing loss in visibility in the Chinese waters, global shipping companies are now finding it perilous to sail towards Chinese ports.

China is trying to dupe the Automatic Identification System or the AIS to prevent world monitors from tracking the shipping data off China’s shores. Sounds suspicious? Well it is very suspicious. Fixed-point terrestrial AIS receivers on China’s coastline and interior waterways, which used to transmit the locations of nearby ships dozens of times per minute, are now mostly dark. AIS data is vital for shipping companies for tracking and securing their ships, along with accordingly facilitating ship traffic, to avoid clogging and congestion at destination ports.

The driving factor behind China’s AIS blackout is China’s new Personal Information Protection Law that took effect on November 1. China wants us to believe that a threat to national security is the reason why it has restricted foreign nationals from accessing AIS data, on grounds that anti-China powers could use this data to hurt China. But there is definitely more to China’s illegal concealment of its geo-location data than what meets the eye. Here are the real reasons why a petrified China has blacked out its shipping data.

Make no mistake, China’s commercial ships are a no less threat than its fishing militia or the People’s Liberation Army Navy. Consider this- China in 2019 tested a missile that could be deployed and fired from a shipping container, making it convenient for China to launch deadly missile attacks against enemies using its military vessels disguised as commercial ships.

So, China may now step up its efforts to unleash its shipping militia on the world as its criminal fishing militia wreaks havoc in the Exclusive Economic Zones of other nations. In an event of war, China would be in a position to surreptitiously deploy its Kamikaze-styled military vessels among commercial fleets. For democratic countries, it would become difficult to identify which of China’s thousands of shipping boats are associated with the maritime militia, and which are not.

The second reason behind China’s brazen AIS blackout is its quest to downsize imports and help its crippled economy. Since it would be impossible for foreign ships to navigate safely into Chinese waters, imports into would turn into an expensive hassle. Industry experts believe that “decreased visibility would likely cause more congestion at Chinese ports, which have been gridlocked amid poor weather and pandemic-related disruptions, because it would become harder to time vessel arrivals with low-traffic periods.”

So, badly clogged ports will surely help China rein in its burgeoning imports. China’s imports grew at their fastest pace in 10 years this year, fuelled by surging demand and heightened inflation at home. Also, production costs in China have gone up drastically, forcing Chinese consumers to increasingly look for cheaper foreign substitutes. Falling exports and surging imports are also threatening China’s foreign reserves. So, China is discouraging global shipping companies from embarking on a China-bound journey, meanwhile the out-bound Chinese ships would have to face no such trouble.  And that’s where we come to –

The third reason behind China orchestrating this AIS blackout could be to resuscitate its dying shipping industry and provide its own shipping companies with a considerable advantage over foreign ones. China has not stopped receiving the AIS data, it is just not sharing it with other nations. So, Chinese authorities will always remain aware of the real-time geo-location of all the vessels floating in its maritime boundaries; hence it would be easier for Chinese ships to avoid clogging and take an easy route out of the Chinese ports.

This also shows that China is wary of Japan’s plans for the Southeast Asian region. Japan has already unveiled its plans to turn Southeast Asia into a logistical hub of the world. Japanese developer Daiwa House Industry will soon be launching an international logistics business in Southeast Asia, catering to the growing number of Japanese manufacturers operating in the region. So, for China to keep Japan from toppling its position as the sole logistics supplier in the region, it becomes necessary to hold some significant advantage over its would-be Japanese competitors.

China knows it is running a race it can never win. China’s economic collapse has made it a pariah for world traders. China’s militarizing of its shipping vessels also shows that its PLA is least-prepared to fight out its rivals in the Indo-Pacific region. China’s nefarious plans to further stir turmoil in the world’s supply chains are now out in open, and the world must resort to retaliatory measures to make China taste its own poison.