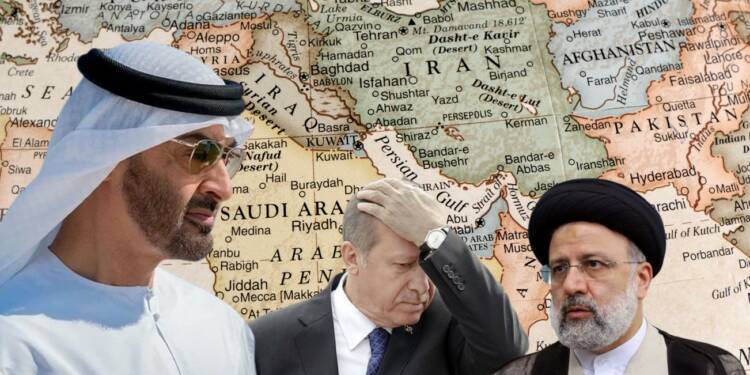 The downward spiral of Erdogan’s foreign policy ambitions is directly proportional to the speed at which Turkey’s economy is failing. In such a situation, when no country was willing to help it, UAE stepped in with an investment of a total of USD 10 billion in key sectors of energy, health and food being prominent. This was signed with the historical visit of UAE’s crown prince and powerful de facto ruler, Mohamed Bin Zayed to Turkey. This deal had a significant impact on the regional dynamics given Erdogan could no longer act in any way that can cause reservations in the UAE.

Now, with its massive Turkish coup, UAE has started the process of using Ankara in its efforts to isolate Iran in the region. Turkey is pursuing reconciliation with Israel, according to Turkish President Recep Tayyip Erdogan. Erdogan made the remarks during a meeting with Crown Prince of Abu Dhabi Sheikh Mohammed bin Zayed of the United Arab Emirates, which was followed by a plan for the UAE to spend $10 billion in Turkey. “Whatever kind of step we took with the UAE, we will also take comparable steps with the others,” Erdogan stated when asked about relations with Israel and Egypt.

Iran has been trying to capitalise on any and every rupture to increase its influence via proxies. In the process, Iranian proxies end up destabilising the region, compromising the existing political system and in the larger context keep the region away from a sustainable economic path towards common prosperity. However, with the UAE on a diplomatic winning streak, it wants to end this cycle. While the UAE has started engaging Tehran and mentioned its intent to better the bilateral relations, on the other hand, it is now engaging Turkey to defuse tensions with other regional allies like Israel and Egypt, thereby isolating Iran as the sole regional spoiled power.

Iran is looking forward to red-ink its anti-Arab policies and is actively engaging the UAE to bury the hatchet. Iran’s top nuclear negotiator recently visited Abu Dhabi, where the two sides stressed improving and strengthening bilateral relations. Hence, the UAE is well poised to eliminate the two biggest rivals of the Arab world single-handedly, with its well-crafted diplomacy and astute negotiation skills. MBZ knows how to target the weakest nerve of the enemies, and he is doing exactly this vis-à-vis the UAE’s relations with Iran, a perfect example of carrot and stick diplomacy.

Following President Mohamed Morsi’s removal in 2013, Turkey and Egypt severed ties. In 2013, they both expelled their respective embassies and degraded their ties. Turkey expelled Israel’s ambassador in 2018 after demonstrators were killed near the Gaza border. Despite supporting opposing sides in the Libyan conflict, Turkey attempted to reconcile with Egypt earlier this year. Ankara said in March that it had established diplomatic relations with Cairo for the first time since 2013, and in April, Turkey’s foreign minister celebrated a “new era” in relations with Egypt.

However, under the guidance of the UAE, Ankara is now making changes in its approach towards foreign policy and improving ties with Israel and Egypt. Erdogan stated that he is willing to establish a comprehensive dialogue with Israel. The Turkish summary of the Erdogan-Herzog call stated, “Differences of opinion can be eliminated if acted with mutual understanding in both bilateral and regional matters.” “There is potential for a relative improvement in Israel-Turkey ties, more than there was two weeks ago.”

UAE has found the best tool in Turkey to highlight the Iranian destabilising activities and use it to launch a geopolitical offensive against Iran. As Ankara is forced to remove its support for opposing sides in Syria, Libya among other places, the arithmetic will shift in the favour of the larger Arab allies. This will provide an opportunity to corner and separate Iranian proxies so that it is easier to take them on.