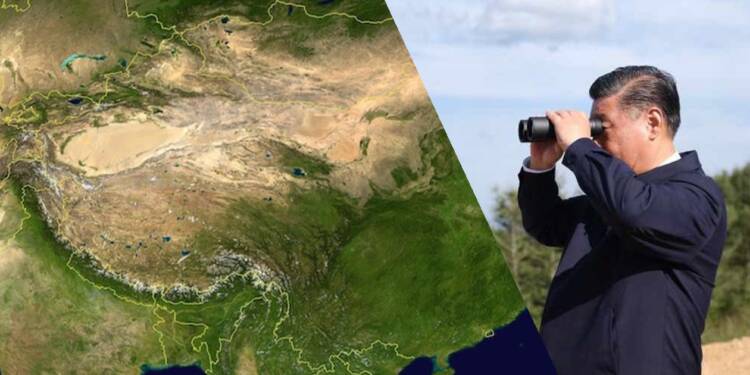 International analysts have remained fixated with the myth of China’s superpower status. Chinese intimidation and salami-slicing tactics that involves invasion of smaller countries and forcible occupation is wrongly perceived as a symbol of strength. Yet, China has an invincible enemy- geography. Yes, China’s geography is its biggest enemy. Geography is the reason why the paper dragon can’t trouble India or invade Taiwan or bully countries like Vietnam, Laos and Myanmar.

How Tibet acts as a natural barrier to Chinese expansionism:

You must have heard about Tibet, the ancient land of Hindus God Shiva which came to be known as the land of the Buddhists in later years, continues to suffer under Chinese occupation. The story of Chinese occupation of Tibet dates back to the 1950s. China invaded Tibet in a bid to counter Indian influence in the Buddhist nation. It also helped the middle kingdom control two big rivers- the Yangtze River and the Yellow River, that originate in the Tibetan Plateau.

However, its Tibet invasion hasn’t turned out to be a great experiment. With an average altitude of 4,380 meters, Tibet is virtually inhospitable. So, it occupies 13% of its present land area and accounts for only 0.2 percent if its total population.

Tibet is a massive Plateau that wears a desolate look. For the Chinese, controlling the huge Buddhist nation is a challenge in itself. Tibet, which would have been the tenth largest country in the world, had it been independent, is the region that divides China and its arch-rival, India.

From a Chinese perspective, mobilizing troops on the India front involves traversing the highly inaccessible Tibetan Plateau. Chinese have tried to overcome the challenge by building highways and railroads across Tibet, but certain stiff challenges continue to hurt China.

Tibet’s overall geography and difficult terrain translates into limited Chinese airstrips that can be pressed into service for pitched battles. On the other hand, India enjoys a major geographical advantage as Northern Indian plains allow the Indian Air Force to easily reach the disputed region with China in case things escalate into a limited war.

Moreover, it also plays a big role in the kind of payloads that can be carried by the fighter aircrafts. A study by the Belfer Center at the Harvard Kennedy School of Government in Boston stated, “The high altitude of Chinese air bases in Tibet and Xinjiang, plus the generally difficult geographic and weather conditions of the region, means that Chinese fighters are limited to carrying around half their design payload and fuel.”

Chinese attempts to control and colonize the Tibetan Plateau also forces the country to concentrate its Air Force and Army in Tibet. This leaves it extremely vulnerable in other conflict zones like Taiwan, the South China Sea and the East China Sea. In case of a multi-front war, Chinese forces could therefore end up with overstretched supply lines.

China is often found bullying countries like Vietnam in the South China Sea. However, geography comes back to haunt China. when it comes to land borders with Southeast Asian countries like Laos, Vietnam and Myanmar creates an entirely different set of issues for China. True, China is a huge military power. However, it faces a numbers of problems on its land borders with Southeast Asian nations- Vietnam, Laos and Myanmar. The Chinese People’s Liberation Army (PLA) has a total of 2 million troops. On the other hand, the three Southeast Asian countries may be much smaller but they have a combined military strength of 1 million personnel. China, of course, cannot devote its entire military strength on the borders with Laos, Myanmar or Vietnam. But the smaller Southeast Asian nations that have only China to deal with can afford to mobilize all their troops on the China border.

Also, China’s land borders with Southeast Asian nations are dominated by dense jungles. This region is therefore unsuited to traditional warfare and countries like Vietnam that excel in guerilla warfare have a certain edge in any war in this region. This is why China had to face a massive embarrassment when it went to war with Vietnam in the year 1979. According to Western estimates, 28,000 Chinese troops were killed while another 43,000 were injured. The casualties in Vietnam stood in the range of 20,000 to 35,000- many of them civilians who were killed by the PLA soldiers during the invasion into Vietnam.

This is one big reason why China cannot invade Myanmar, Laos or Vietnam despite all its military might.

China is surrounded in the Pacific by what is known as the “First Island Chain”- an island group stretching from Japan through the Philippines to Indonesia. This gives the US an opportunity to encircle the Chinese and prevent access into the greater Pacific Ocean. The US enjoys the confidence of several allies like Vietnam, Japan, South Korea and the Philippines in the region.

Due to the South China Sea disputes and other ideological issues, most of these allies have allowed American military presence on their soil which means that China will never realize its blue-water Navy ambitions.

At the same time, there are more local issues. Take Taiwan for example. China wants to invade Taiwan, yet it is widely accepted that the invasion of Taiwan is a bloody, logistical nightmare- one that the People’s Liberation Army is too inexperienced to handle. Taiwan has been preparing for a military conflict for the past 70 years, and that too with a single-minded focus on China. It is not easy to overwhelm Taiwan militarily especially when one brings Japan and the United States into the equation.

So, China can build as much military firepower as it wants. It can scramble as many fighter jets as it wants, but it cannot match up to its rivals because Chinese geography remains China’s biggest enemy.

What Does ANID Stand For? Abbreviations with Explanation