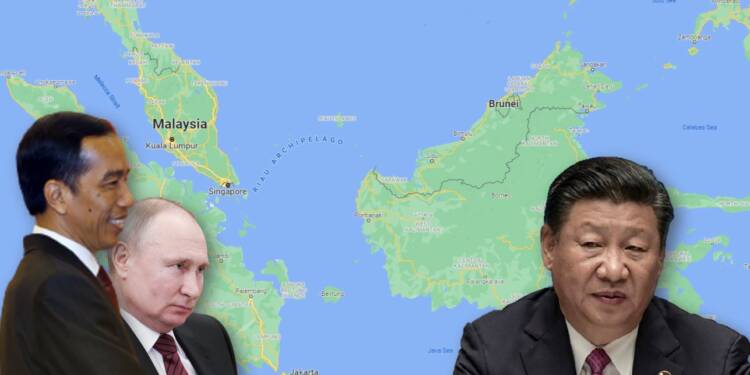 Sometimes, things change so swiftly that many people are not able to see the change or follow the breadcrumbs to the tectonic shift that has happened. This is exactly what has transpired in the South China Sea as Russia and ASEAN are holding a military exercise. The first-ever joint naval exercise between Russia and a number of Southeast Asian countries began on Wednesday along the Strait of Malacca, one of the world’s busiest maritime channels, according to Indonesia’s navy.

The drills take place at a time when tensions in the Indo-Pacific are rising, especially in the South China Sea, which Beijing claims almost entirely. The drills on Wednesday were attended by all ten members of the Association of Southeast Asian Nations (ASEAN). Warships and planes were contributed by Indonesia, Thailand, Singapore, Vietnam, Malaysia, Myanmar, and Brunei, with the Philippines serving as a virtual observer. The exercises will continue until Saturday. However, this is not sitting well with the Chinese Communist Party, which thinks of this development as a roadblock in its designs for the region.

“Those exercises are for regional peace, stability, and development,” Ivanov explained. “In our strategic relationship, we’re turning a new page.” The naval drill between Russia and ASEAN is scheduled to last until December 3 in Indonesian territorial waters near North Sumatra. Russia will participate in the drills with the huge anti-submarine warfare ship Admiral Panteleyev. There will be two stages of the manoeuvres: virtual and naval.

On October 28, Russia and ASEAN had their fourth meeting via videoconference. The conference was designed to coincide with the 30th anniversary of Russia-ASEAN relations, which was commemorated this year. A number of documents were adopted at the summit with the goal of strengthening strategic partnerships. The decision to organise the first-ever Russia-ASEAN naval drills was authorised by the leaders.

In what exposes China’s cowardice, Nikkei Asia has reported how Beijing is willing to join ASEAN in its efforts to rid the region of nuclear weapons. Xi Jinping said on Monday that Beijing was ready to sign a Southeast Asia nuclear-weapon-free treaty. The Southeast Asia Nuclear-Weapon-Free Zone, also known as the Bangkok Treaty, was signed in 1995 by the 10-member Association of Southeast Asian Nations. The treaty stipulates that its signatories cannot “develop, manufacture or otherwise acquire, possess or have control over nuclear weapons,” “station or transport nuclear weapons by any means,” or “test or use nuclear weapons.”

Read more: China is so scared of Nuke Subs that it wants ASEAN nations to declare the entire region “Nuke free zone”

China realises that its submarines are no match for the nuclear-powered underwater slayers of the U.S., UK and soon, even Australia. The AUKUS alliance has rattled China, which is now trying to save itself by declaring Southeast Asia a nuclear-free zone. China may be the largest Navy in the world with around 350 ships and submarines. Yet, no one fears it and despite being accorded special “shooting powers” earlier this year, the Chinese warships and coastguard vessels seem quite harmless.

“It is important for us to ensure the balance of power in our region, to reiterate that this is a non-aligned region,” said Connie Rahakundini Bakrie, an Indonesian military analyst from the Institute of Defence and Security Studies. On the other hand, Indonesian first fleet commander Arsyad Abdullah said the exercise would “enhance the interoperability and understanding between the Russian and ASEAN militaries”.

This exercise opens a new epoch in the geopolitics of Southeast Asia. Not only this, but the entry of Russia with the help of Indonesia alters the equation that China so conveniently crafted for its own benefits.