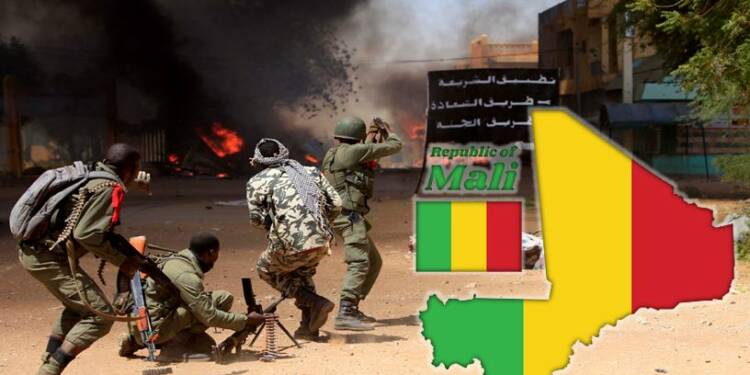 Mali is the centre of a massive West African conflict, but nobody wants to talk about it. Why? Because those wreaking havoc in Mali, and the Sahel region at large, are radical Islamic extremists. With their guns, these Islamists have upended an entire region. On December 8, seven UN peacekeepers were killed and three critically injured when their vehicle was blasted by an improvised explosive device in central Mali. So far, the death toll of UN soldiers in the troubled west African nation has risen to 19. Mali is the most dangerous nation for UN peacekeeping forces, due to the high number of attacks which extremists mount on such forces.

Essentially, there exist five main Islamist terror groups in Mali, namely – Ansar Dine, Movement for Unity and Jihad in West Africa (Mujao), al-Qaeda in the Islamic Maghreb (AQIM), the Signed-in-Blood Battalion and the Islamic Movement for Azawad (IMA). There is also The National Movement for the Liberation of Azawad (MNLA), which is ethnically driven, fighting mostly for the rights of Mali’s minority Tuareg community.

Also read: As China was still licking its wounds after losing Mali, Guinea kicks out its China friendly President

Mali is a Muslim-majority country, with over 95% of the total population calling themselves adherents and practitioners of Islam. What is interesting, however, is the fact that a vast majority of Malians find no audience in the extremist shenanigans of the Arabs, which the world largely knows as Wahabism or Salafism. Therefore, the military junta continually ousting governments which fail at keeping extremism and terrorism in check, finds massive popular support among a majority of Mali’s population. The armed terror groups are majorly concentrated in northern Mali, which is closer to the Islamic-dominated Saharan region, as opposed to the rather secular and tolerant nature of people residing in other sub-tropical parts of the country.

When did it all start?

The current crisis in Mali began in early 2012 when a Tuareg separatist group, the National Movement for the Liberation of Azawad (MNLA), in the north rebelled for the fourth time. The MNLA posed a severe challenge to the Malian government with its alliance with extremist Islamist groups like Ansar Dine, al-Qaeda in the Islamic Maghreb (AQIM), and the Movement for Unity and Jihad in West Africa. The Malian government, meanwhile, proved inefficient to handle the emergent crisis.

So, then-President Amadou Toumani Toure was deposed in a military coup carried out by the Malian army, as anger spread over the government’s response to the rebellion. On 5 April 2012, after the capture of Douentza, the MNLA said that it had accomplished its goals and called off its offensive. The following day, it proclaimed the independence of northern Mali from the rest of the country, renaming it Azawad.

In 2012 itself, the MNLA’s alliance with Islamist groups began disintegrating, since the latter wanted Sharia law to be applied not just in Mali, but across West Africa and Sahel. The MNLA, which is ethnically driven, did not agree to the radical demands of Islamist groups.  Islamists gained control over Timbuktu and Gao, destroying shrines and imposing a harsh interpretation of Islamic rule.

As the Islamist movement spread all across northern Mali and West Africa, France grew concerned. Mali is a former French colony. In January 2013, France announced a military intervention in Mali at the request of the Malian regime. France landed close to 5,000 troops on the ground and launched an air campaign to push back the militants. Today, the violence that started in Mali has spread across Africa’s Sahel region.

So, France has been withdrawing from Mali and redistributing its troops and weapons across the more disturbed Sahel region. The military intervention in Mali actually resulted in the Islamic extremists getting out of Mali and plaguing countries in the Sahel region.

Mali has never really been stable. Mali fell under the control of France during the late 19th century. The Mali Federation, comprising of Mali and Senegal gained independence from France on June 20, 1960. Senegal, however, withdrew from the federation in August 1960. Modibo Keïta was elected the first president. He, however, established an autocracy. On 19 November 1968, following progressive economic decline, the Keïta regime was overthrown in a bloodless military coup led by Moussa Traoré.

This regime, meanwhile, faced three coups itself, but was able to quench the protests. But then, through the 1980s and culminating in the March Revolution of 1991, Mali first faced rising dissent against the Traoré regime, which soon turned into mass pro-democracy rallies and a nationwide strike. In a decisive coup which followed on March 26, 1991, Lieutenant Colonel Amadou Toumani Touré announced on the radio that he had arrested president Moussa Traoré. As a consequence, opposition parties were legalized and a national congress of civil and political groups met to draft a new democratic constitution to be approved by a national referendum.

The next coup came in 2013, against the Toure regime. Cut to 2020, and it has been a season of coups in Mali. The most recent coup came in May 2021, when the two leaders of the 2020 military coup – Sadio Camara and Modibo Kone – were replaced by N’daw’s administration. Almost immediately, President N’daw, Prime Minister Moctar Ouane and Defence Minister Souleymane Doucouré, were detained in a military base in Kati by the Malian army.

Also read: Mali President arrested by his own army for going soft on Islamic extremists

Much of Mali’s troubles can be attributed to its precarious geographical location, which is in the Sahel region of the African continent.  The Sahel region lies at a transitional zone, with the Sahara Desert in the north and the tropical rain-forests in the south. Hence, with a semi-arid topography, the Sahel climate is extremely unpredictable, with dry and hot weather conditions further marred by a history of frequent droughts.

The Sahel region of Africa includes Senegal, Mauritania, Mali, Burkina Faso, Algeria, Niger, Nigeria, Cameroon, Central African Republic, Chad, Sudan, South Sudan, Eritrea and Ethiopia. These countries, which lie in this region, often find themselves in the global spotlight for all the wrong reasons. Famines, religious terrorism, overpopulation, diseases, social unrest and anti-state rebellions have been major causes of misery for them all.

Mali has rich deposits of gold, bauxite, manganese, iron ore, limestone, phosphates and uranium. Mali is the fourth largest gold producer in Africa. Gold is by far Mali’s most important export, comprising 64% of total exports and 21% of government revenue in 2018. A major cause of conflict is also the greed of certain groups and powers to cease control over Mali’s resources. The Mali conflict, however, has precipitated into something much larger, which today threatens peace across Africa.

China’s local governments are set to collapse like dominos