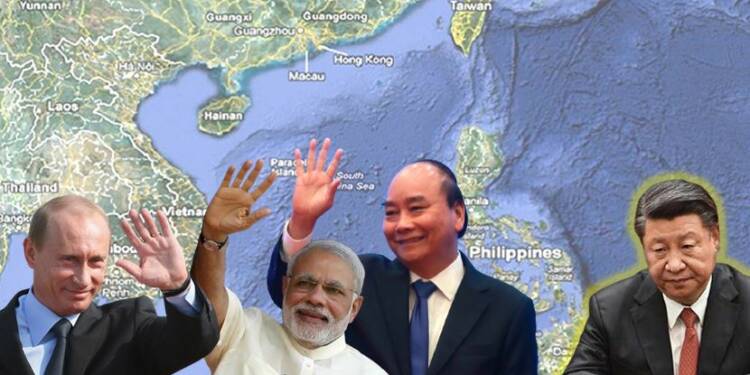 December has been a month of robust diplomatic engagements for Russia, as far as Russia’s emerging role in the Indo-Pacific region is concerned. Vladimir Putin has so far met with Vietnamese President Nguyen Xuan Phuc and Indian Prime Minister Narendra Modi.

Both India and Vietnam share bitter ties with the Communist Party of China (CCP), and Russia is dropping hints of a tectonic shift in its foreign policy regarding China and the Southeast Asian region.

The rise of the India-Russia-Vietnam triad:

Russia’s relationships with India and Vietnam form the bedrock of Russia’s involvement in the region. Strengthening military and economic ties with India, and boosting cultural, economic as well as military ties with Vietnam, has emerged as Russia’s top foreign policy priority as of late.

This became evident when the visiting Vietnamese President Xuan Phuc held a meeting with the Vietnam Veterans Association in the Capital of Moscow earlier this month.

Also read: Vietnam has been a victim of Chinese excesses in the past. Well! Not anymore

Interestingly, Vietnam is keen to boost engagements between Vietnam People’s Army and the Russian Veteran Federation, to rejuvenate the Soviet-era bonhomie between the two nations.

The relations between China and Vietnam deteriorated almost alongside the debilitation of ties between China and the Soviets in the 1950s to 1960s. As decolonization across the third world accelerated, Russia and China increasingly came at loggerheads.

Also read: The end of the Soviet Union started in Chernobyl. Wuhan will ensure the same for People’s Republic of China

Nikita Khrushchev of Soviet wanted “peaceful existence” with the west, however, Mao of China wanted to spark a global movement of communism. By the end of the 1960s, the Soviets withdrew all of their 1400 advisers from China.

It was in March 1969 that the border dispute between the two powers escalated to a firefight. By 1978, Russia had deployed its world-class modern weaponry on the Soviet-China border.

Russian aggression prompted the Chinese to foster strong relations with the USA, which was viewed as a betrayal by the Vietnamese. Although China had provided Vietnam with lofty economic assistance in the past, Vietnam increasingly found its interests aligned with those of the Soviets.

In June 1977, Vietnam joined the Soviet Council for Mutual Economic Assistance (COMECON). COMECON further strengthened Soviet-Vietnamese military ties. By mid-October in 1978, the Soviets had dispatched their 4,000 advisors to Vietnam. Later on, Russia helped Vietnam occupy Laos. Around 1977, the Soviets had constructed missile bases in Vietnam, that were designed to threaten China.

Vietnam and the Soviet Union further cemented their ties on November 2, 1978, when they signed a treaty of friendship and cooperation that included a clause allowing for mutual consultations in an event of a military emergency.

Deng Xiaoping of China deemed the Russia-Vietnam alliance as the most threatening of all. With strong relations with India and Vietnam, Deng believed that Russia was working to encircle China from all sides.

That was the golden period of Russian-Vietnamese ties. The flourishing partnership ceased after the collapse of the Soviet Union in 1991. President Nguyen Xuan Phuc wants to resuscitate it now.

China is bound by Russia in the north, India in the south and Vietnam in the east. While bolstering its ties with India and Vietnam simultaneously, Putin is seemingly working on reviving Russia’s Soviet-era strategy to encircle China. Russia-China ties are best explained as a marriage of convenience. An ostentatious partnership with Russia helps China avoid isolation on the world stage. In return, Russia gets access to the vast Chinese market.

But this fragile partnership is beginning to collapse now. Take for example, an ongoing trade war between China and Russia. According to Russian Consul-General in Harbin (Vladimir Oschepkov), Chinese authorities have introduced new restrictions on the import of certain categories of goods from Russia. China has stopped importing certain goods from Russia via some railway crossings, including coal, iron ore, fertilizers, pulp, ore and agricultural produce.

Interestingly, this came close on the heels of Russia’s first-ever naval military exercise with the ASEAN states in early December. Warships and planes were contributed by Indonesia, Thailand, Singapore, Vietnam, Malaysia, Myanmar, and Brunei, with the Philippines serving as a virtual observer. This must have miffed China vehemently. Needless to mention, Russia is also providing India with the S-400 missile defence system in face of the burgeoning military threats from China.

China has enemies in abundance. Tensions are already running hot between China and Taiwan, and China and Japan. Vietnam, India and the Philippines have also seen their bilateral relations with China nosedive in the past two years. Russia may never speak overtly against China, but China’s involvement in the Central Asian region and Arctic region is hardly welcomed by Kremlin. With the CCP’s fall in sight, Russia is growing bolder in its engagements. The Indian-Russian and the Vietnamese-Russian partnership will play a huge role in the dismantling of the evil CCP empire.