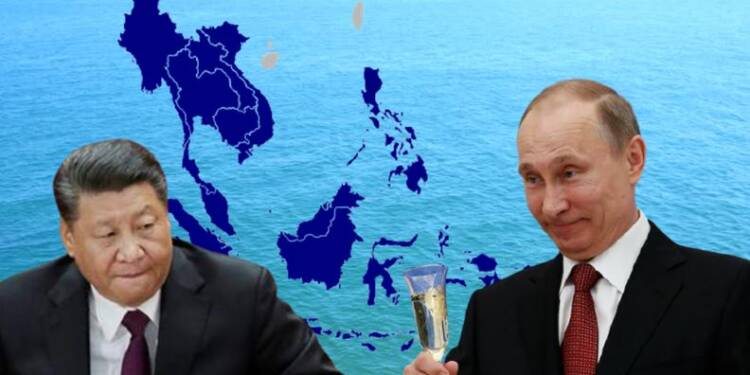 President Vladimir Putin on Monday is coming to India to elevate the Indian-Russian partnership in the Indo-Pacific region. The Modi administration had made it a foreign policy priority to press Moscow for bolstering its engagements in the region, and the trend shows that India has got tremendous success in its pursuit.

Southeast Asia is the region where China is the aggressive power, which threatens the peace and stability of the region. China has emerged as an existential threat for nations like Taiwan, Vietnam and the Philippines. Interestingly, this blatant marauding directly helps Russia.

Russia this week held its first-ever naval exercise with southeast Asian nations including Indonesia, Thailand, Singapore, Vietnam, Malaysia, Myanmar and Brunei. This irked China to such an extent that bellicose officials in Beijing had to retaliate by announcing fresh trade restrictions on Russian imports.

Between 2000 and 2019, Russia was southeast Asia’s greatest armaments supplier, with shipments worth $10.7 billion. For the same period, the United States made $7.9 billion in sales, while China made $2.6 billion.

Russian arms exporters have fewer reservations about selling their newest equipment to southeast Asian consumers than their American or European counterparts. They also provide more affordable deals, with no strings attached. Moscow is also willing to accept barter payments from countries with excess commodities but low foreign reserves.

Vietnam is Russia’s main southeast Asian armaments customer, accounting for 61% of sales over the last two decades in the region. Submarines, frigates, fighter jets, anti-aircraft missile systems, and tanks were among the $7.4 billion worth of weapons sold to Vietnam by Russia between 1995 and 2019. Their most well-publicized deal was a $350 million contract for a dozen combat training aircraft signed in July 2019.

Also read: Russia could be providing Sukhoi-57 fighter jets to the Philippines, Vietnam, Malaysia, Indonesia and Myanmar to take on the China challenge

Recently, Russia also showed its willingness to sell its advanced Sukhoi-57 fighter jets to these nations battling Chinese hegemony in their backyard. “We are holding negotiations with several countries. We see requests and interest. Southeast Asia, four or five countries [show their interest]”, CEO of the state arms seller Rosoboronexport, Aleksandr Mikheyev had told Russian reporters in July.

“The China Threat” is a great strategic asset for Russia. This helps Russia gain ground in the Indo-Pacific and the southeast Asian region. So, it becomes Russia’s responsibility to help “The China Threat” grow even stronger.

Russia has remained cautious about endorsing China’s stance on Taiwan. Putin remarked in October that China doesn’t need to “use force” to achieve its “Taiwan unification ambitions.” Russia and China also held joint naval exercises in the Sea of Japan, in the same month. Russia this week deployed its anti-missile defence system on Japan-claimed Kuril Islands, sending a strong message to Japan.

Interestingly, Russia shies away from getting engaged in any joint-naval exercise with China in the southeast Asian region. That is Russia’s mighty game with China: augmenting “the China Threat” on one day, and harnessing it to its own use on the other day.

But sad to say, bellicose ‘Wolf Warriors’ of the Chinese foreign minister continue to flash their “Russia Card” to intimidate these tiny nations, along with the US and the EU. Russia is no friend to China, and sooner or later, China will come to realize this fact, only to find itself incapacitated to act against Russian interests any longer.

What zone is Virginia for plants: everything you need to know