An anti-China spark lights up in calm Switzerland 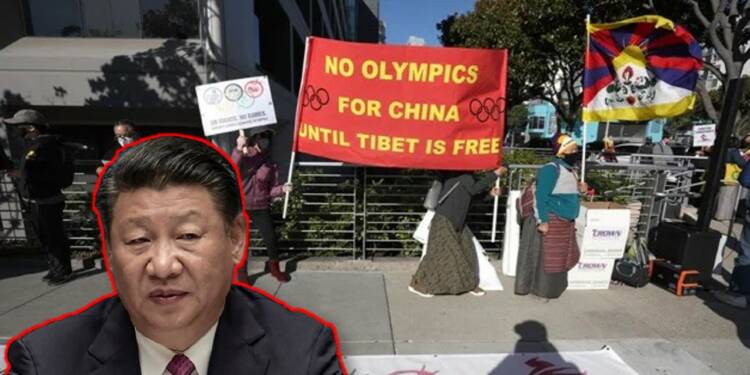 China under Xi Jinping has earned the image of a global bully and as its wolf warrior diplomacy is backfiring in most of the world including Europe. On Saturday, two Tibetan students chained themselves to the Olympic rings outside the International Olympic Committee’s Swiss headquarters to demand an international boycott of next year’s winter games. The two were part of the most recent protest against the 2022 Olympic Games in Beijing, which was held in response to Beijing’s violations of human rights and treatment of minorities.

As officials gathered for a meeting, members of the Tibetan Youth Association in Europe (TYAE) and Students for a Free Tibet staged a sit-in at the IOC building in Lausanne. The campaigners asked that countries withdraw from the “Genocide Games,” which they claim are being staged to bolster China’s image. After entering Tibet in 1950 in what it calls a “peaceful liberation,” China assumed control of the territory. Tibet has subsequently become one of the country’s most restricted territories. Beijing’s authority, according to critics led by the exiled spiritual leader the Dalai Lama, amounts to “cultural genocide.”

Two activists draped a banner that read “No Beijing 2022” over the building’s entrance, while five students entered the building and staged a sit-in protest. “Despite rising worldwide condemnation of the IOC and China, the Chinese regime’s human rights violations in Tibet, East Turkestan, and Hong Kong continue unabated,” Tenzing Dhokhar, Campaigns Director of TYAE, one of the demonstrators, said. “By partnering with China, the IOC becomes complicit in the Chinese Communist Party’s misdeeds, which the Beijing Olympics will sports-wash.”

Much to China’s dismay, Merkel’s exit has irreversibly changed the EU’s character. Germany has a new Chancellor in the form of Olaf Scholz, and a new coalition government has taken charge of Germany with the single mandate of making China’s life miserable.

Read more: The exit of Merkel makes Taiwan a much sought after Partner for Europe

In a ‘Coalition Agreement’ signed by the new German government, it has been laid out that China will be treated as a “systemic rival”. This is for the first time that Germany has referred to the red rogue nation as a systemic rival. The agreement also commits to working out a “comprehensive China strategy” as part of the joint EU-China policy, “to be able to realize our values ​​and interests in the systemic rivalry with China.”

Why the world must boycott Beijing Winter Olympics:

Nazi Germany for instance was allowed to host the 1936 Berlin Olympics despite Adolf Hitler’s ambitions to France and Poland, and reversing the 1919 Treaty of Versailles, which had compelled Germany and its allies to accept sole responsibility for the First World War, apart from making territorial concessions. Even Hitler’s anti-semitic agenda was ignored by the world leaders of that era.

Hitler had then ensured that he became the central figure of the 1936 Olympics, and after the multi-sport event ended, an emboldened Hitler went berserk.

The world cannot repeat the errors of 1936 in 2022, especially when we know the level and extent of humanitarian costs involved. China cannot be allowed to host the Winter Olympics, while it plans to invade Taiwan, take over the entire South China Sea, and claim Indian territories in the Himalayas. The world also cannot turn a blind eye to the Uyghur Muslims and Tibetan Buddhist monks being subjugated day in and day out, by the CCP.

There are similar wherever you are, be all there quotes