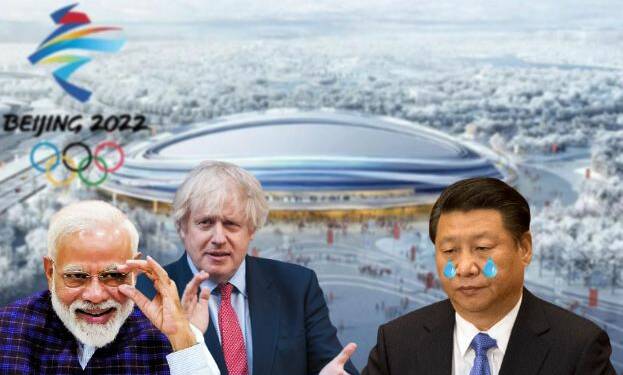 The Beijing Winter Olympics, to be held in the Chinese capital city next year are a major event for the Chinese Communist Party. At a time when the global democratic community is breathing fire down China’s neck for its persecution of non-Han Chinese communities and ethnic minorities, not to mention its brutal crackdown on Hong Kong and the constant threat of invading Taiwan, for Xi Jinping – the Winter Olympics is an opportunity to humanise the CCP.

In fact, the successful conduct of the 2022 Beijing Winter Olympics is supposed to be a major plank with which Xi Jinping seeks reselection as the Chinese Communist Party’s General Secretary next autumn, and as a consequence, becomes China’s president for an unprecedented third term.

But the democratic world is not willing to extend such favours to Xi Jinping. At least 19 major countries have decided not to sign a truce with China ahead of next year’s Winter Olympics. India, the United States, the United Kingdom, Japan, Canada and even Turkey are among several other nations who have refused to sign the ‘Olympic Truce’ with China, which is an ancient tradition meant to lead to a cessation of hostilities among warring sides to ensure smooth conduct of the games.

The resolution called on all member states to “harness the power of sport to advance the world by fostering an atmosphere of peace, development, resilience, tolerance and understanding”. By not signing the Olympic Truce – India, the United States, United Kingdom, Japan, Australia and others have effectively signalled to China that they are least interested to participate in the Beijing Games and that even if they do, it will surely be keeping in mind the interests of athletes in mind.

Read more: China’s Winter Olympics is going to be a Covid-safe event as most countries could boycott it

Each of the countries that have not signed the Olympic Truce has effectively kept the doors open for boycotting the games at any time of their choosing. Further, these countries are not bound by any document or ‘truce’ which would serve as an impediment to them taking on China militarily if the situation so demands around the time when the Beijing Winter Olympics are on.

The fate of the Winter Olympics to be held in Beijing now hangs in the balance. All major countries have refused to sign the Olympic Truce, and Xi Jinping will continue to sweat until the contingents of these countries do not arrive in China for the games. That in itself is quite a punishment for the man.