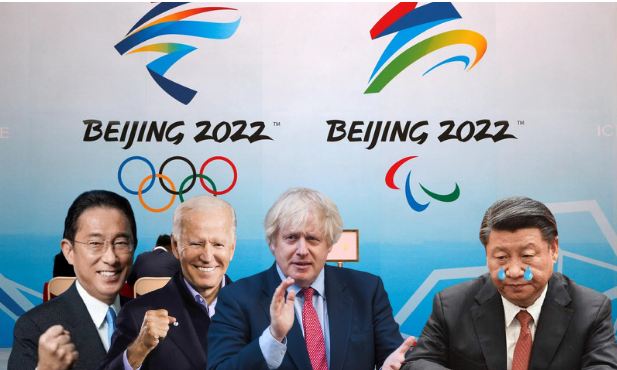 China-made things don’t last, but Covid is an exception. Despite this deadly pandemic hounding the world, Japan this year managed to conduct the Tokyo Olympics 2020 quite successfully. Japan convinced the world that it is best prepared to tackle the burgeoning crisis and organize sports events without compromising the safety of sportspersons.

Democratic world in arms against Beijing

Now, it is China’s turn. China is hoping to conduct Beijing Winter Olympics next year. But here’s a catch! Diplomatic countries are boycotting it! The US, the UK, Canada and Japan, all have dropped subtle hints of flying the coop. This may frustrate Beijing but more and more countries are expected to follow the suit.

Amid allegations of human rights violations piling up on China, the US president Joe Biden on Thursday said he was considering a boycott of the Beijing Winter Olympic Games. Responding to a reporter’s question about the potential for a diplomatic boycott, Biden said it was “something he was considering.”

If media reports are to be believed, the UK’s Boris Johnson-led administration has also made up its mind not to attend the games, amid UK’s MPs pressing the Prime Minister to declare an official boycott. UK’s leading newspaper The Times reported that Johnson’s administration would not attend the games, however, some of the UK diplomats to China will.

Canada is on the list too. Canada recently said it was talking to its allies on the issue. Syrine Khoury, press secretary to Foreign Affairs Minister Melanie Joly was quoted as saying in media reports that “Canada remains deeply disturbed by the troubling reports of human rights violations in China.” Peng Shuai’s disappearance has aggravated the situation for Beijing, where countries are now making it a point to launch fresh attacks on China.

How can Japan not join the party? Japan is also considering an official-level boycott. Make no mistake, Japan was the very first country in the world to report blatant human rights violations by China in its Xinjiang region against Uyghur Muslims.

Prime Minister Fumio Kishida on Friday said that “Japan will consider things from its own perspective.” Some Japanese conservative lawmakers are vehemently pressing the Kishida government not to send government officials to Beijing, in the face of repeated illicit incursions in the Japanese maritime boundaries around Japan’s Senkaku Islands.

India, Europe may join the party too

But the privilege of embarrassing China on the world stage is not exclusive to these four countries. Some European countries are also discussing the boycott. Australia won’t bat an eyelid either! A country facing threats of a nuclear attack by China won’t find it a puzzle to choose whether to attend the event or not!

Similarly, one can also expect India to take a similar stance. India has been battling China’s aggression on its borders for almost two years now. So, by boycotting China’s Olympics, India may seek to make China taste its poison! China, under the rule of the CCP, is the most hated country in India. Boycotting Beijing Olympics will hardly invite pushback from its sportspersons.

Beijing is already frustrated at mounting pressure in the Peng Shuai case, and now a joint declaration of boycotting Beijing Olympic games by the democratic world will come as salt to China’s wounds. China is looking forward to holding the games in February next year, and with the absence of the leading democratic countries from the fray, it is best opportunity to project its soft power across the continents will eventually turn into its biggest embarrassment.

China is struggling to shore up its declining cachet in the geopolitical space, and a boycott of the mega-event will only exacerbate its miseries. The event that was supposed to alleviate China’s soft power crisis, is all set to end up as its biggest embarrassment! This is the democratic world’s response to truculent Wolf Warrior diplomacy. The most exciting part is, it’s just the beginning!

Duterte’s “Marcos” ploy to confuse the Filipinos, appease China and stay in power