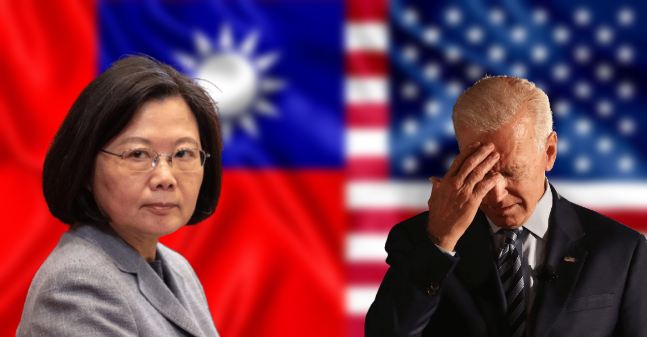 Taiwan for the longest time has stood with the United States of America through thick and thin. Even after getting betrayed by the US in the 1970s after Washington recognised Communist China as the real China replacing Taiwan in all international forums.

However, of late, Beijing under Xi Jinping is not interested in maintaining the status-quo and US under Joe Biden is proving that his administration is not interested in standing up for its allies. Realising these dynamics, US allies are de-coupling from total dependence on the US for their security. Now even Taiwan seems to have joined the list of those wary allies.

According to a leading US research firm, Taiwan’s chip fabricators inked an agreement on December 3 to build their semiconductor equipment industry, opening up an “option to detach from the West.” The US sanctions on China have not only hit the Chinese tech giants, but it has also prevented selling semiconductor chips to China, which is a $300 Billion market. While the United States claims the right to halt the sale of chips made on US machinery or intellectual property, such blanket steps have had unintended consequences, and hurting Taiwanese industries is one of them.

The Biden administration could have created more practical solutions, but a haphazard policy coupled with kowtowing to Xi Jinping has made Taiwan lose hope in the US that could come to its rescue. Taiwanese chipmakers, who have big commitments on the Chinese mainland, are concerned that US sanctions may prevent them from using American equipment to produce semiconductors for China. The Wall Street Journal reported on December 9 that the US Defense Department seeks to prevent SMIC, China’s largest chipmaker, from buying American computers.

The de-coupling has been a long time in the making, given the innumerable flip flops Joe Biden has made regarding safeguarding democracy. Earlier on the margins of a G-20 summit, US Secretary of State Antony Blinken and Chinese Foreign Minister Wang Yi met to discuss USA’s commitment to the one-China policy.

As per reports, both exchanged warnings against acts that could exacerbate tensions across the Taiwan Strait. However, in the same breath, Blinken said that Washington opposes any unilateral changes by Beijing to the status quo around Taiwan.

Recently, President Joe Biden stated that if China attacked Taiwan, the US would favour Taiwan, reversing a long-held US foreign policy position. However, continuing with the meek policy, a White House spokesman later assured US media outlets that his comments did not signal a policy shift. Now Blinken is doing the same and making it crystal clear that Biden’s promise to defend Taiwan was just a ‘gaffe’.

As per a report by Asia Times, semiconductor research organisation VSLI analyst Dan Hutchison noted that a homegrown chip equipment industry “would enable Taiwan to divorce from the West.” Worse, it suggests that the world after globalisation is entering a dark age of oversupply, fragmented R&D resources, and low innovation.”

The Taiwanese initiative, according to Hutchison, is an “obvious post-globalisation defensive strategy to resist the current US administration’s action to shut down China, as well as China’s response to establish its equipment industry.”

Taiwanese firms are at the forefront of China’s government-sponsored push to develop domestic chip manufacturing. “A notable phenomenon is that the proportion of domestic-funded enterprises’ revenue has dropped significantly from 2016 to 2020, from 44.0 percent to 27.7 percent,” said Ye Tianchun, chairman of China’s Semiconductor Industry Association’s integrated circuit (IC) division, at a conference in November. “A noteworthy phenomenon is that the proportion of foreign-funded enterprises’ revenue has risen from 49.1 percent to 61.3 percent,” led by Taiwanese chip fabricators.

To avoid US sanctions impeding their investments on the mainland, Taiwanese chipmakers will create their chip-making equipment to maintain their leadership in China’s domestic chip manufacturing. Applied Materials and LAM, the two leading chip-making device manufacturers, are both based in the United States. Tokyo Electron, Japan’s largest equipment manufacturer, raised its China sales this year from 50 billion yen ($441 million) in 2015 to 400 billion yen.

The US Chamber of Commerce last year said, “For the US semiconductor sector, foregoing the China market would mean reduced economies of scale and R&D spending and a less central role in the complete web of global technology supply chains.”

Decoupling will encourage some foreign companies to ‘de-Americanize’ their semiconductor operations, putting to the test whether this is practicable and encouraging China to pursue self-sufficiency.

However, with approximately $16 billion in billings in the second and third quarters of 2021, China has surpassed the United States as the world’s largest importer of semiconductor fabrication equipment. During the same period, Taiwan spent $12 billion on chip-making equipment.

In such a situation, creating an economic complex interdependence concerning China is the most viable option for Taiwan to mitigate any possibility of the Communist Party of China’s designs to invade the democratic Island. And even if China looks past it and decides to attack Taiwan, it will deal both military and economic damage to Beijing at an exponential scale, leaving Communist China in socioeconomic shambles.

An anti-China spark lights up in calm Switzerland