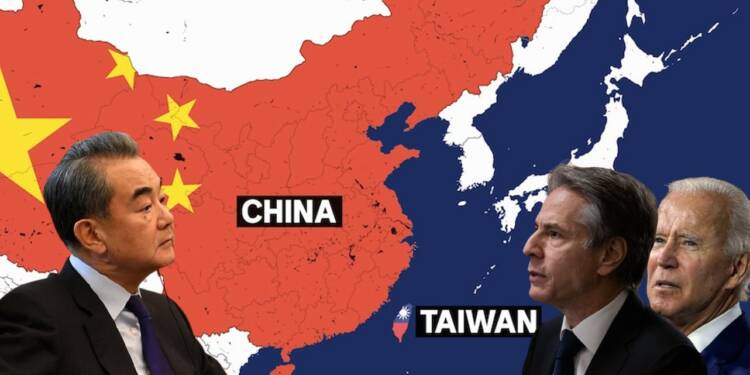 The Biden administration’s policy of strategic ambiguity is hurting its own allies, and compromising trust in US support in an event of a Chinese attack on Taiwan. While Joe Biden under the pressure of regional allies like Japan has come out in support of Taiwan and made some powerful statements, but was later clarified by officials, that Joe Biden meant ‘maintenance of status quo.’ Now on the margins of a G-20 summit on Sunday, US Secretary of State Antony Blinken and Chinese Foreign Minister Wang Yi met to discuss issues of concern.

As per reports, both exchanged warnings against acts that could exacerbate tensions across the Taiwan Strait. However, in the same breath, Blinken said that Washington opposes any unilateral changes by Beijing to the status quo around Taiwan. Recently, President Joe Biden stated that if China attacked Taiwan, the US would favour Taiwan, reversing a long-held US foreign policy position. However, continuing with the meek policy, a White House spokesman later assured US media outlets that his comments did not signal a policy shift. Now Blinken is doing the same and making it crystal clear that Biden’s promise to defend Taiwan was just a ‘gaffe’.

Although Biden declared on Oct 21 that the US would come to Taiwan’s defence if required, Washington has long adopted a policy of “strategic ambiguity” on whether it would intervene militarily to safeguard Taiwan in the case of a Chinese attack. According to the reports, Blinken made it clear that Washington’s “one China” policy had not altered, and when asked about Biden’s remark, Blinken stated there had been “no change in our policy.”

Read more: Biden called up Jinping and assured him that the US will respect the “One China Policy”

Biden’s betrayal to Taiwan, at its most vulnerable

Biden appeared to be referring to Washington’s long-standing policy under which it officially recognizes Beijing rather than Taipei, and the Taiwan Relations Act. But then there’s a big and well-known catch here. China claims Taiwan as an estranged province of itself, which will be reunited with the mainland by force, if necessary. So far, the United States has maintained a policy of “strategic ambiguity” with respect to the question of whether it would militarily intervene in favour of Taiwan in case China launches an offensive against the sovereign island nation. Well, Biden has become the first American president to toss that ambiguity out of the park.

This comes at a time when tensions across the Taiwan Strait are at an all-time high, Taiwan’s air force scrambled on Sunday to warn off eight Chinese aircraft, including fighter jets, that had entered its air defence zone, according to the country’s defence ministry. For a year or more, Taiwan has complained about Chinese air force sorties near the self-ruled island, often in the southern area of its air defence zone near the Taiwan-controlled Pratas Islands. The Chinese aircraft included six J-16 fighters, one anti-submarine aircraft, and one surveillance aircraft, according to a statement released late Sunday by the military ministry. Even after this, Blinken representing Joe Biden met with his Chinese counterpart and promised him no change in the Biden administration’s policy.