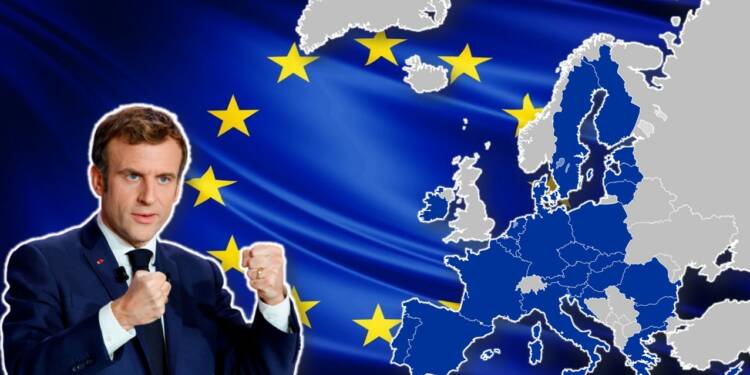 “Europe a world power, fully sovereign, free to make its own choices and master of its own destiny,” French President Emmanuel Macron said these words last month. And with the beginning of this year, France has also assumed the presidency of the European Union after 13 years. “Relaunching, strengthening, belonging” will be the priorities of the French Presidency during the next six months.

For the next six months, France will shape the EU’s energy policy, foreign policy, and carbon emission policy from the commanding position. In his New Year greetings last Friday, Macron had said, “2022 will be a turning point for Europe.”

An Army for the EU

Macron has always advocated for the EU to have its army, apart from the NATO defence regime. In 2018, Macron had warned that Europeans cannot be protected without a “true, European army”. And after the US’ Afghanistan fiasco last year, the calls for the EU’s army have re-emerged quite strongly.

It is true that the NATO defence regime heavily relies on logistical and intelligence support from the US. The EU realized how helpless it was without enough US backing when the US left its European allies in the lurch last year. “Strategic autonomy” is the quintessence of Macron’s vision for Europe – military, economic and technological independence from the mercurial US. Under the French presidency, the EU will aggressively move forward in that direction.

The French war on radicals and extremists has indeed made France a better and safer place to live in. However, extremism and Islamic radicalism still bulk larger on the EU’s national security; which stands aggravated by the EU’s lax immigration policy.

In November 2019, French PM had made it clear that France will “take back” control of the immigration policy. Consequently, a decisive war against radicals and Islamists was launched that rattled Islamist governments, likes of Turkey and Pakistan, across the world.

In September 2019, Macron said that the EU was sometimes too lax on illegal immigrants when it comes to humanitarian values. So, the EU’s immigration policy is set to get a grand makeover at Macron’s hands.

The European Union has pledged to become carbon neutral by 2050. But the road to accomplish this arduous task goes through the EU’s energy policy. France views Nuclear power as a source of clean energy.

The French policymakers are facing resistance from the Germans on this issue; however, the latest draft proposal on the Union’s energy policy predominately addresses France’s concerns, which generates its 70% electricity through nuclear power sources.

France’s energy policy is realistic. It doesn’t mandate its European allies to do away with the so-called non-green energy sources altogether. It takes into account the concerns of poorer EU nations who still rely on gas-powered electricity generators. Although this may create hurdles for the Union to meet carbon emission reduction deadlines, that will still be preferred by pragmatists like French President Emmanuel Macron.

Russia and China are the two major focuses of the EU’s foreign policy. The US has played the role of a guiding light for the EU foreign policymakers since time immemorial. But under the French presidency, this will change. France’s stress on the EU’s sovereignty sums it all up. The EU has always played second fiddle to the US on China and Russian front. But for France, strategic autonomy is what matters the most.

The US, especially under Democrats, has always perceived Russia as the biggest threat to its national security. But France has a realistic approach to its ties with Russia. Today, France and Russia are coordinating on regional issues related to Iran, Lebanon, and Southern Caucasus (Nagorno-Karabakh conflict).

The Biden administration’s incessant attempts to instigate Ukrainian conflict may have fuelled the tussle between EU and Russia of late; however, French leadership may help ease the tensions. One interesting fact is that Germany’s Russian policy is driven by its energy complications; while on the other hand, French Russia policy is driven by pragmatism.

As far as China is concerned, French foreign policy will place greater emphasis on standing up to China and becoming more involved in the Indo-Pacific region. Under German leadership, former Chancellor Angela Merkel always strived to solidify the EU-China business relations. Even an investment treaty was also signed between the two powers just before Biden’s assumption to the White House. However, French intervention in the later months rendered the deal defunct.

Consider the EU’s new trade weapon for example. The EU is in the works for inking a law that would target nations that practice economic coercion against EU member countries. In other words, the bloc is drafting an anti-China law. That also means that it would become perilous for China to economically intimidate countries like Lithuania.

France’s rise to the helm means that Taiwan is no longer going to be “untouchable” for the European Union. The European Parliament recently adopted an unprecedented report on EU-Taiwan relations and cooperation in October. In early November, the Parliament sent its first-ever delegation to the island nation of Taiwan.

The delegation even met with senior Taiwanese government officials and civil society organisations, in a bid to learn from Taiwan’s experiences in combating foreign interference.

In fact, the EU and Taiwan have already found common ground against China in the field of cybersecurity and resilience, which has further expanded the scope for diplomatic engagement between the two sides.

Impact on the EU-US ties

The scars inflicted by the AUKUS fiasco still run deep in the France-US relations. The US killed the French-Australian submarine deal through the security pact, which angered the French in epic proportions. And now, France is believed to have avenged its humiliation by inking a massive $19 billion arms deal with the UAE.

Although the Biden administration has tried to cool down the tensions between the two major powers, France still looks askance upon Biden’s intentions. So, this will reflect onto the EU-US relations. France prefers strategic autonomy, and it will attempt to steer the EU’s policy away from the US umbrella.

This means less coordination in the Indo-pacific arena between the EU and France; and France’s more reliance on regional partners like India and Japan.

Under France, the EU will get over its identity crisis. It will emerge as a strong and independent player on the world stage, and its foreign policy will be greatly influenced by pragmatism rather than by ideological barriers and the US-imposed hatred.