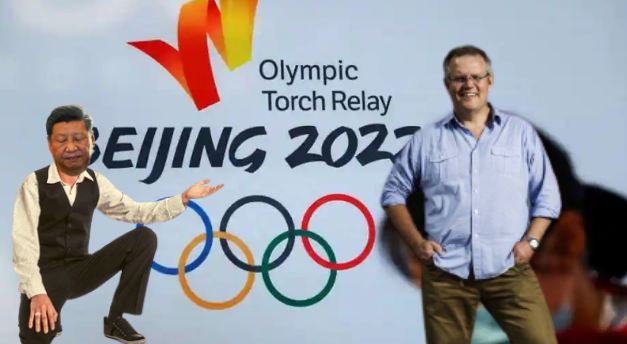 Life has come full circle for China in a matter of less than a month. Last month, China was telling Australia that it isn’t bothered if Australia doesn’t participate in the Beijing Winter Olympic Games. It was dismissing Australia as a non-entity.

And now? China is pleading with Australia to not boycott the multi-sports event. It is suddenly talking about the “true spirit of the Games” and how hosting the Olympics is “a huge challenge” in the COVID context.

Last month, Australian Prime Minister Scott Morrison shocked China by joining a US diplomatic boycott of the Beijing Winter Olympics and Morrison said that the decision was a consequence of Australia’s struggles to reopen diplomatic channels with Beijing for discussing human rights abuses in Xinjiang and adverse Chinese actions against the import of Australian products.

Scott Morrison said that it was “no surprise” that Canberra had joined the diplomatic boycott initiated by the United States and he was doing it because it was in “Australia’s national interest” and the “right thing to do”.

The Australian PM added, “Australian government officials (will), therefore, not be going to China for those games. Australian athletes will, though.”

China has a general habit– flexing its muscles and talking tough when it is actually under the pump. After Australia’s boycott, China did suffer an epic meltdown.

So, Chinese Foreign Ministry spokesman, Wang Wenbin said, “China has reiterated many times that the winter Olympics is not a stage for political posturing and manipulation.” Wang added, “China never planned to invite any Australian officials to the games. Whether they come or not nobody cares.”

And in an indirect jibe against the US, Wang said, “It exposes fully that the Australian government has been so blindly following certain country’s steps that it doesn’t tell right from wrong, and has no bottom line.”

China’s changing tunes and exhortation to “friends in Australia”

Now, China has kicked off the 30-days countdown to the Winter Olympic Games and it has suddenly started speaking in a soft, mellowed tone.

Chinese Consul General in Sydney Zhou Limin said, “Recently there has been some noise in certain countries about the Beijing Winter Olympics. In this context today’s event has reflected our multiple good wishes.”

China has been badmouthing Australia for almost the past two years, and has even described it as “chewing gum stuck on the sole of China’s shoes.” But now it is suddenly talking about friendship and camaraderie. Limin said, “Together we look forward to a splendid international sporting event […] The Olympic Games is about solidarity and friendship […]”

And suddenly, China’s undiplomatic diplomats are reaching out to “Australian friends”. Limin said, “It’s also a stage for people of all countries to enhance mutual understanding. We hope you will continue to learn more about China and the Chinese culture through sports […] and friendship between our two peoples. We respectfully encourage Australian friends to watch the Games.”

Wang Xining, chargé d’affaires for the Chinese embassy in Canberra, too is getting very friendly towards Australia. He got nostalgic to be precise.

Xining said, “My memory is still fresh […] although we lost out to Sydney by just two votes, in the years that followed China gave its full support to Australia’s effort to host the Sydney Olympics.” China is really desperate and is bringing out past favours to get Morrison to roll back the diplomatic boycott of the Beijing Winter Olympics.

The envoy also reminisced when Beijing won the 2008 Summer Olympic Games, it received “huge support from our friends in Australia and the sports community”.

Well, guess what? Morrison is in control of Australia today and he is not China’s friend. Beijing Winter Olympics is a tool for Morrison to grill China. After all, the Chinese government and businesses have spent $3.9 billion on the events in and around Beijing and nearby cities. So, it is time for Morrison to spoil China’s big investment and settle scores following the vindictive Chinese trade war against Canberra.