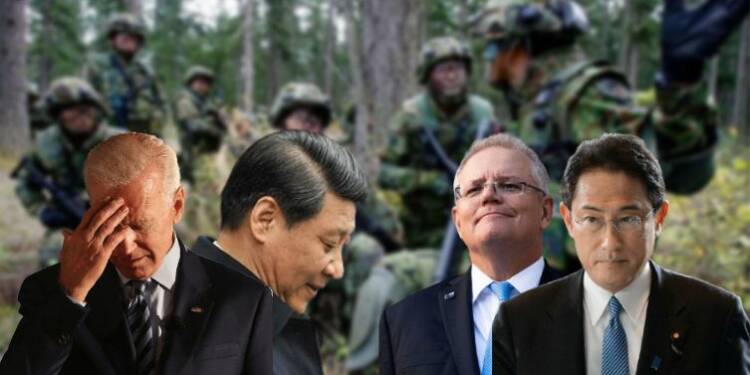 The US and Japan are breaking up! No prizes for guessing the reason though! The former imperial nation has had enough of the US’ flip flops in the Indo-Pacific. So, Japan is now prioritizing Kangaroos ahead of Uncle Sam. Australia and Japan on Thursday signed a major security pact. The idea is to get a better partner than the USA in battling China’s coercion and intimidation.

Security pact between Australia and Japan

After this pact, the defence forces of the two countries will co-operate with each other. Australian PM Scott Morrison said the new pact will contribute to a secure and stable Indo-Pacific.

You know what; even China admits that the Australian-Japanese partnership is the deadliest of all in the Indo-Pacific. China on Wednesday cried that this partnership should not harm any third party interests. It’s obvious for China to be worried and anxious. After all, there is no Joe Biden to dilute their agenda with issues like climate change and the Russian threat.

Mind the fact that Japan and Australia have now signed the Reciprocal Access Agreement; which means that the defence forces of the two nations now could be deployed on each other’s territories. For China, this is nothing less than a disaster!

The RAA pact paves the way for Australia and Japan to jointly confront any possible Chinese invasion of Taiwan. To put things into perspective, the distance between China and Australia is more than 9000 kilometres but, now Australian troops could be deployed on Japanese islands located as near as just 2000 kilometres away from China. Australian threat for China has grown manifolds after the signing of this pact.

Also Read: After Japan, Australia vows to go to war with China over Taiwan

Japan’s realization of its over-reliance on the US

And that’s how the pacifist country is getting over its over-reliance on the US military. As of now, the commanding power lies with the US. Japan needs the US logistical support and intelligence backing to carry out any military activity even on its soil. The “samurai nation” wants to cancel this veto power now. That’s because the US is no longer perceived as a reliable partner by the Japanese now.

Allies are supposed to support you in times of crisis. But Joe Biden is doing the exact opposite in Japan. Consider this- Can you even imagine that the Joe Biden administration is considering withdrawing a major chunk of its strategic assets and troops currently deployed in Japan’s Okinawa prefecture.

According to a report by Nikkei Asia, the U.S. is keen to deploy its Indo-Pacific military presence far and wide rather than keep it concentrated at a handful of bases as it seeks to protect itself from China’s advanced missile capabilities. This is especially bad news for countries like Japan, where the U.S. has a large, concentrated mass of troops.

This will most definitely lead to a vacuum of allied forces for Tokyo. This will make ‘the land of the rising sun’ more vulnerable and exposed to China’s aggression. But Japan is now striving to fill this void by strengthening its security ties with Australia. Japan is seemingly preparing for a war with China over Taiwan. It is developing its hypersonic weapons. Japan is also considering deploying railguns to counter the hypersonic missile threat from Beijing. Japan has already shown its intentions to do away with its pacifist constitution.

And now by signing a major defence pact with Australia, Japan has finally blown the trumpet of war against China.