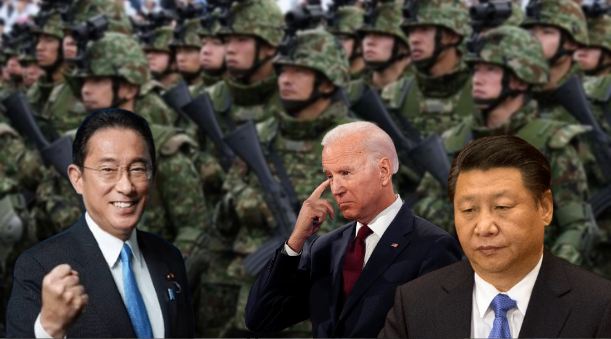 Is Japan preparing for a war? The most peaceful nation in the world today stands as a great bulwark against a truculent China. Mired in the provisions of Article 9 of the pacifist constitution, Japan has always counted on the USA’s nuclear umbrella to fortify its territories. But now it looks all set to break the shackles of its outdated constitution and shoulder the responsibility of its defence.

Japan’s defence budget is going up. Japan is rapidly militarizing its islands close to China. Japanese conservatives have dropped enough hints that signal Japan’s pacifist constitution may soon be a thing of the past. All in all, Japan is indeed preparing for war, and it’s sending out an astounding message to the Biden administration—we will fight China, with or without the US.

Japan ready to militarize its Islands near China

The Japan Air Self-Defense Force (JASDF) is considering expanding its presence in the Nansei Shoto region, which includes the Senkaku Islands of Ishigaki City and Okinawa Prefecture. Under the proposed plan, fighter jets will be deployed across the islands in the region, which will use commercial airports for undertaking military operations in the face of a war with China.

Currently, Naha Airport is the only airport in Okinawa that is used by JASDF fighter jets. However, China may seek to destroy the airport to hamper Japan’s aircraft operations in an event of war. So, Japan is also looking to build more airport bases in Okinawa so that it is best prepared to stop China short of running over its territories.

The JASDF is also considering forming a special group that would provide support in areas, such as ensuring that fighter planes and transport planes can take off and land from remote-island airports in times of emergency.

Japan slashes its dependency on US military

Although, Washington is required to defend Japan in an event of a military dispute under the 1960 US-Japan security treaty; the leaders in Japan have grown sceptical of the US’ intentions to uphold the treaty should a war breaks out between China and Japan. The Biden administration’s ambiguous stance on the defence of Taiwan has also aggravated Japan’s worries.

Interestingly, Japan is now looking more than willing to shoulder more costs for hosting the US troops stationed within its territories. Japan has asked the United States to consider using the increase in Tokyo’s contribution to funding expenses such as the maintenance of facilities used jointly by the Self-Defense Forces and the U.S. military, rather than covering utilities at U.S. bases as before.

Japan believes that shouldering more cost will help the country have a greater say in the management of the strategic assets of the nation. In a way, Japan is asserting itself over the military equipment and assets being jointly used by the Japanese and American troops for decades. Japan is expected to spend $1.76 billion in so-called host nation support, which will place Japanese troops in a better position to undertake quick mobilization and deploy strategic assets across islands in the hotly contested region.

Why is Japan taking the matter of its security into its own hands?

Japan doesn’t want to be caught off guard even if it is left in the lurch by the US should Beijing wage an all-out war against Tokyo or Taiwan. China wants to usurp Japan’s Senkaku islands, which has raised red flags in Tokyo and Washington. China under President Xi Jinping has also made it a priority to materialize the Taiwan-unification ambitions, an issue that Japan has linked to its national security.

At this critical juncture, the Biden administration may seek to further complicate security dynamics for Japan by withdrawing a major chunk of its strategic assets and troops currently deployed in Japan’s Okinawa prefecture. According to a report by Nikkei Asia, the U.S. is keen to deploy its Indo-Pacific military presence far and wide rather than keep it concentrated at a handful of bases as it seeks to protect itself from China’s advanced missile capabilities. This is especially bad news for countries like Japan, where the U.S. has a large, concentrated mass of troops.

The dispersal programme being executed by the Biden administration at permanent bases in locations such as Yokosuka, home of the Navy’s 7th Fleet and where 12 large warships are stationed; and Okinawa, where more than half of the 50,000 U.S. military personnel stationed in Japan are located, will most definitely lead to a vacuum of allied forces for Tokyo. So, Tokyo is preparing in advance for an impending drawdown of the US forces from Japan.

Japan to bid adieu to its pacifist constitution

Japan is testing the limits of its pacifist constitution, which is expected to hike its defence budget by a whopping $6.74 billion this year. Article 9 of Japan’s constitution bars the government from spending on defence beyond the 1% GDP cap. However, the rise of the right in the Japanese political spectrum has made the calls for revising the pacifist constitution even louder in some conservative factions.

In 2014, Shinzo Abe reinterpreted Article 9 that rendered the Japanese Self-Defense-Forces more powerful and assertive. Subsequently, Japan deployed JSDF ships to patrol near the disputed Senkakus in defiance of Chinese government protests. Abe even vowed to arm Japan with Ballistic missiles after the burgeoning missile menace from North Korea.

Abe’s ambitions of steering his country away from pacifism now stand a great chance of getting materialized with the rise of conservative parties. The conservative Japan Innovation Party (JIP) bagged 41 seats in these elections, 30 higher than the last elections. JIP is not only the staunchest military supporter in the parliament, but it may also stand with the LDP to revise the country’s constitution.

The LDP, JIP and other conservative parties in the 465-seat lower house of the parliament now hold 345 seats — well up from their combined strength of 324 seats before the elections. That means, now conservatives can easily revise the constitution with an unprecedented majority in the lower house, way above the needed support of two-thirds of lawmakers.

Unlike the US, Japan lacks the comfort of not paying any heed to China’s adventurism in its backyard. For Japan, China is an existential threat, which can only be eradicated by acquiring means of destroying its enemies. To rival the burgeoning threat from Beijing, the Samurais have returned to the fray, wearing their pride on their sleeve, with a resolve to bring an end to the Communist tyranny, once and for all.