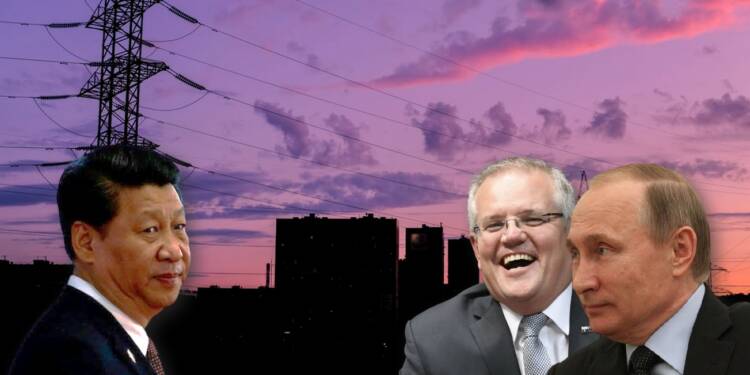 China is urgently seeking to double imports of Russian natural gas to keep itself a little warm in freezing cold nights and generate electricity to power its houses and industries. The paper dragon is now pleading with Russia to fast track the building of “The power of Siberia 2 gas pipeline”, which will be built by Russian company Gazprom.

Once completed, the pipeline will pump 50 billion cubic meters of gas annually to northern China. Russian President Vladimir Putin said last month that a feasibility study on the pipeline would be finished very soon. Well, Russia is anyway more than willing to make the best out of China’s energy miseries. Let us explain to you how!

So, as we know, China and Australia are enmeshed in a fierce geopolitical battle. In order to punish Australia, China is desperately hunting for viable alternatives for its energy imports. As of now, Australia’s share in China’s overall LNG imports stands at a whopping 43%. This is Australia’s huge leverage that the communist nation wants to get rid of!

China’s demand for natural gas had risen to 180 billion cubic meters last winter, and almost half of China’s gas needs are met by gas imports from nations like Australia, the US and Russia. China’s desperation to do away with its energy reliance on Australia is a big opportunity for Russia. The first Russia-China gas pipeline was launched in December 2019 that transported nearly 13 billion cubic meters of Russian gas in the first two years to China.

Why over-dependence on Russia is a grave threat for China?

Following the launch of the second pipeline, Russia would be able to dominate China’s gas supply chains by controlling the flow of nearly 60 billion cubic meters of gas every year. And that could have grave consequences for China in the long run.

If one day, for example, Russia decides to punish the paper dragon for its aggression in the Arctic, or for overstepping its red line in Central Asia, it could easily do it by stopping the flow of gas to the paper dragon. So, China is unknowingly empowering Russia with a powerful tool that will effectively neuter China politically and militarily at Putin’s will.

China is already facing a severe energy crisis due to its economic war with Australia. China last year had banned imports of Australian coal to punish the Kangaroos for standing up to the communist nation. However, the plan miserably backfired. And now Putin is making the best out of it.

Russian involvement in Kazakhstan has also aggravated China’s woes. Kazakhstan is a resource-rich nation and China had aspired of seizing Kazakh natural resources to tame its burgeoning demands. Last May, Kazakhstan had exported 230,000 tonnes of crude oil to China to reduce its energy dependence on Russia.

But this strategy has failed miserably.

For Putin, increasing China’s energy dependence on Russia is like killing two birds with a single stone! By expanding its gas exports market, Russia also seeks to reduce its over-dependence on gas exports to Europe. It will become even more difficult for Europe to secure stable gas supplies from Russia if China starts importing Russian gas massively.

So, Russia has almost hijacked China’s energy supply chains now. And Australia has helped it in a big deal. It’s only because of Australia’s economic resilient that today China is begging Russia to alleviate its energy woes. This unexpected alliance between China’s biggest friend and China’s biggest enemy is sure to bring devastation to the communist nation in abundance.