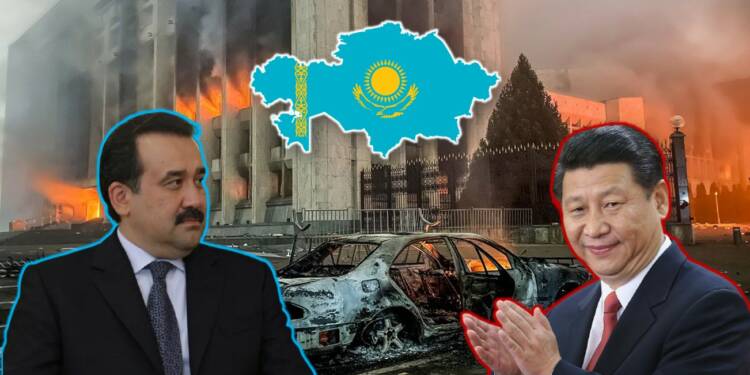 There is no denying that Central Asia is the battleground for influence between Russia and Communist China. This truth is however covered with the blanket of a close friendship between the two nations. But the situation in Kazakhstan has brought these confrontations to the fore. For Russia, it is part of the larger zone of influence which derives its geographical stretch from the pre-split USSR and thus directly related to national security and psychological civilizational security. For China, the country is important for its energy supplies and for the fact that the BRI passes through the country.

Considering its stakes and the slow chipping away of Russian influence in the Central Asian region, Beijing would most certainly want a more pro-China regime in Kazakhstan. The current protests in Kazakhstan that have turned into wholescale riots and anarchy may have been the perfect opportunity for the CCP to wrest the country out of Russia’s sphere of influence. While earlier these might have been distant speculations, the arrest of Karim Masimov emboldens these claims given his background with CCP. As per reports, the arrest of Karim Masimov was announced Saturday by the National Security Committee, which Masimov headed until he was removed this week by President Kassym-Jomart Tokayev.

He is someone who has had his fair share of contact with the CCP in his long professional life and thus represents someone who could be made to further China’s interests at the expense of Russia.

Read more: 2022 was supposed to be a huge year for China’s SCO. Putin turned it into a huge nightmare

In the aftermath of violent protests blamed on foreign-backed terrorists, the former chief of Kazakhstan’s counterintelligence and anti-terror agency was detained on allegations of attempted regime takeover. The National Security Committee, which Karim Masimov led until President Kassym-Jomart Tokayev replaced him this week, confirmed his arrest on Saturday.

Authorities believe security forces killed 26 protesters and 18 law enforcement officers died during the unrest, as of Saturday. The Interior Ministry announced on Saturday that more than 4,400 people had been arrested.

There were no details provided regarding what Masimov, the former chief of the security services, was alleged to have done that would constitute an effort to subvert the government. The National Security Committee, which replaced the Soviet-era KGB, is in charge of counterintelligence, border guards, and anti-terrorist operations.

According to available information, Masimov worked for Kazakhstan’s commercial structures in China and Hong Kong from 1992 to 1995. Masimov is regarded as a specialist on China. In recent years, China has emerged as a significant strategic partner for Kazakhstan, and the two nations are cooperating closely to develop Kazakhstan’s energy resources. From November 16 to 17, 2006, Masimov travelled to Beijing, China, with Finance Minister Natalya Korzhova, Transportation and Communications Minister Serik Akhmetov, and Energy and Mineral Resources Minister Baktykozha Izmukhambetov.

Masimov and Chinese Vice Premier Wu Yi co-chaired the third meeting of the China-Kazakhstan Cooperation Committee. Several agreements between the two governments’ agencies were signed. Secretary Liu stated “It’s a pleasure for me to visit your lovely country at Otan’s invitation. The purpose of the visit is to strengthen our countries’ cooperation and mutual understanding.” Following that, Masimov met with Chinese Premier Wen Jiabao. Therefore, if China was attempting the coup, then we know who their guy would be.

The Russian movement in Kazakhstan is a source of consternation for Moscow’s frenemy, China. After all, China intends to use Central Asia as a link between itself and European markets as part of its multibillion-dollar Belt and Road Initiative. China needs Russia to get out of the way if it is to complete its Belt and Road Initiative through Central Asia. Putin has been busy with his country’s confrontation along its European border, but he has kept a close eye on Russia’s southern and eastern peripheries, which are even more vulnerable.

Russia’s military incursion into Kazakhstan complicates Beijing’s long-term geo-economic and geopolitical objectives, which it has spent years perfecting in order to assure its inevitable climb to Eurasian supremacy, something Russian authorities may not like. Russia is using the ongoing unrest in Kazakhstan to control the oil and gas trade from Central Asia to China. This will put Beijing entirely at Russian President Vladimir Putin’s mercy for energy supplies.

Beijing may have predicted this earlier too, and thus it may have been trying for a coup from behind the scenes and when all the bets failed, it has arrived extending direct support via Shanghai Cooperation Organisation to Kazakhstan to save some form of influence.

Japan has a master plan to pit RCEP against China