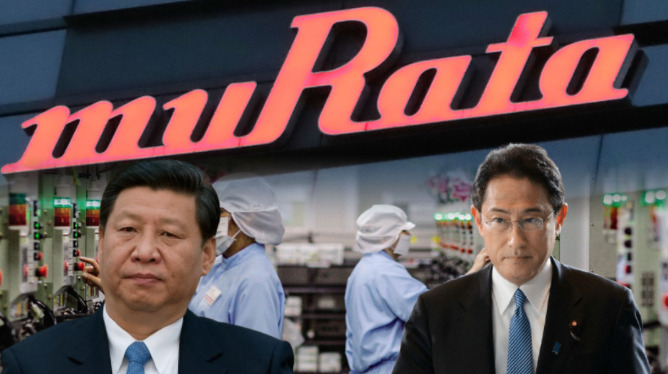 Japan wants to demolish China’s hegemony in the global electronics market. Recently, Tokyo invited semiconductor manufacturers from around the world to set base in Japan. With this, Japan is moving towards absolute control of the global semiconductors supply and is likely to imperil China’s consumer electronics industry that is heavily dependent on semiconductor imports.

Japan is targeting a new sector- capacitors. Currently, China is the world’s largest producer of capacitors. But this is set to change, as a Japanese capacitor manufacturing giant has decided to shift production out of the Communist country.

Why capacitors are important?

In the smartphones industry, they are used for various purposes like maintaining constant voltage, providing ‘boost’ power when the phone is about to discharge and dissipating stored energy to function as a temporary power source for some time.

Japan’s Murata to shift out of China

Murata Manufacturing is looking to cut its dependence on China amidst the ongoing US-China standoff.

Murata is the largest capacitor maker in the world. It supplies parts to the iPhone as well. The company supplies smartphones devices like filters for picking up some radio signals, amplifiers for strengthening transmission signals and duplexers for managing incoming and outgoing signals.

Murata’s operations in China helped the Communists become a leader in the capacitor market. But now the Japanese capacitor giant is looking to move to Thailand to open a new plant in the Southeast Asian country in October 2023.

Why Murata is moving to Thailand?

As per Nikkei Asia, Murata President Norio Nakajima said that the new plant in Thailand will be expanded. Eventually, it will become as big as one in Wuxi, near Shanghai, where Murata produces multilayer ceramic capacitors for consumer electronics.

Murata Manufacturing is adapting to evolving geopolitical equations and changing business conditions. Presently, Murata is dependent on China for over half of its revenue. But the capacitor maker expects China’s shares in its revenues to go down, as the company looks towards the Indo-Pacific for future growth.

Norio Nakajima said, “There is a risk of events happening beyond our control.” The Murata President took the example of an uncertain event like the US imposing a technology ban on China. So, it makes sense for Murata to run out of the Communist country before any such thing happens.

He added, “It is imperative to diversify our supply chain.” Nakajima also pointed out that its key customers like Apple are also looking beyond China. This destroys the basic advantage that China had. A supplier would ideally want to stay close to its customers. And if the customers themselves start shifting out of a particular location, then there is no use staying in that location.

Also, China is losing the advantage of cheap labour and a huge working class with its changing demographics. The Murata President said, “The most populous country today may be China, but in 2030 that will be India, and further down the road it will be Africa.”

He added, “Will those economies be aligned with China or the U.S.? We don’t know. We should be able to respond to both scenarios.”

China’s population is contracting at an alarming pace. It is estimated that China could see its population getting halved within the next 45 years. A slow birth rate of 1.3 and higher life expectancy is ensuring that China is ageing quickly.

By 2050, 39 per cent of the Chinese population will be above the retirement age. This will take away the driving factor behind China’s manufacturing prowess- cheap and ample labour. So, multinational corporations and manufacturing giants like Murata see no sense in persisting with Beijing and are shifting production out of the Communist country.