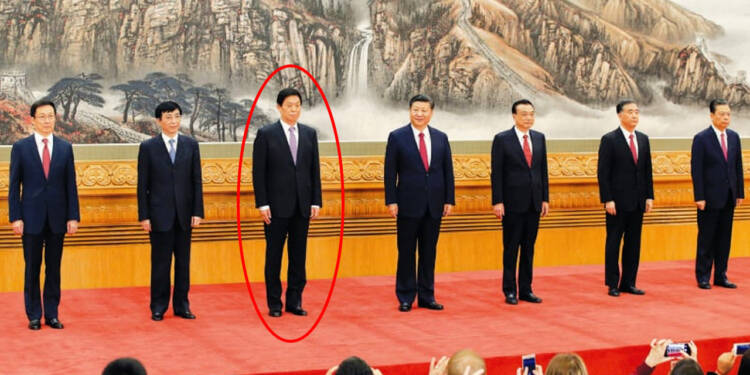 Li Zhanshu, the number three in the CCP politburo standing committee, and the current chairman of the National People’s Congress in China has mysteriously gone missing. He was even absent from the Chinese Communist Party’s New Year tea party.

This tea party is an event where top CCP leaders meet and discuss national policies every year. According to the CCP charter, attending this event is mandatory! So, Li Zhanshu’s disappearance has now sent the speculation market into a tizzy about his whereabouts and well-being, especially because Zhanshu was too close to Xi Jinping.

Some media reports believe that Li Zhanshu is a close friend to Xi Jinping. He is counted amongst Jinping’s most trusted confidants. At a young age, both Zhanshu and Jinping were in charge of neighbouring counties at Hebei province. Later on, Zhanshu became the director of the central office of Xi Jinping. Jinping was so fond of him that he broke the tradition to get him re-elected for the third term in the office.

Leaders in CCP’s top echelons view them as two great friends. But, as soon as the speculations around Zhanshu’s disappearance began emerging in China, a pro-CCP Hong-Kong newspaper called “Ming Pao” came up with some scathing allegations against the politburo member. Looks like someone has fallen off the high horse and been vapourised. And there’s a reason why we say this.

Li Zhanshu: A Jinping confidant or a rival mole

The Ming Pao newspaper spun an interesting theory that Li Zhanshu could be a mole planted by Xi Jinping’s rivals within the politburo committee. The paper claimed that Li’s fake identity was deliberately arranged by the Shanghai faction.

Zhanshu’s disappearance implies two possibilities. Either he is severely ill, or he’s in crosshairs with the CCP. If Zhangshu doesn’t appear in the Central delegation on Chinese New Year slated this February, it will imply that his disappearance is related to the red-hot tensions running within the CCP’s top leadership.

First disappearing the suspected political rivals, and then eliminating them is a classic textbook thumb rule being practised by the CCP for years. For example, in 2006, the-then sixth-ranked member of the Politburo Standing Committee and executive vice premier Huang Ju had disappeared in a similar way. Initial reports claimed that he was ill and then later he was confirmed dead by the CCP officials in mysterious conditions.

Just like Zhanshu, Huang Ju also belonged to the Shanghai faction while the then-president Hu Jintao hailed from the Youth League faction. As it appears, every time a political struggle takes place in the CCP, a top Chinese leader falls ill in mysterious circumstances, only to be getting killed later on.

This time, it appears, is Li Zhanshu’s turn to be scapegoated to satisfy the ever-expanding paranoia of the CCP dictator. Xi Jinping may feel relieved after executing the number 3 of the CCP politburo committee, but this also shows that Jinping is all set to face a rocky path to his third term in the office. His rivals are waiting for a one-right moment to hunt him down and prevent him from being the only invincible power in Chinese politics.

Rocky days ahead for the Chinese president

Nabbing one of his closest leaders in the politburo committee by Xi Jinping will further instill mistrust among the top leadership. Shanghai faction is indeed much stronger and has much deeper roots than what many of us believe it to have been wielding in the CCP.

Many of the politburo members are now realizing that proximity to Xi Jinping is a double-edged sword. Any leader could any day become the next victim of Jinping’s paranoia. This may also lead Jinping’s rivals to consolidate their efforts towards removing Jinping from the helm and isolating his supporters within the CCP. In other words, a coup is in the offing. So, the ongoing crisis risks splitting the CCP right in the middle if the ongoing war between the Shanghai faction and Xi faction ends in a stalemate. Jinping’s condition today corresponds to a dog chasing its own tail. He is treading down a perilous path that is sure to flatten his evil regime sooner than later.