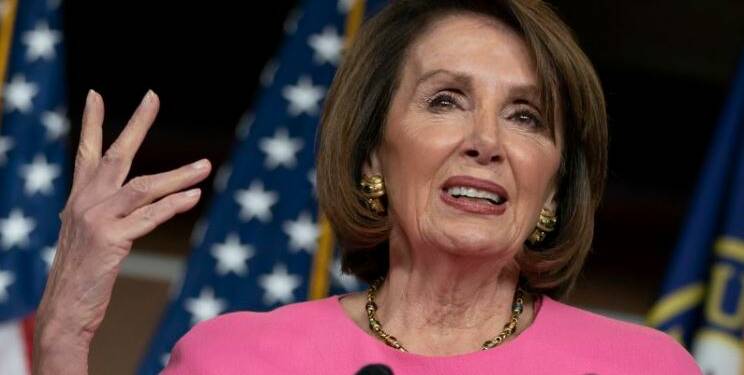 A Newsmax report has now revealed that she has accrued $30 million personally from insider stock trades on the very Big Tech companies she oversees in Congress.

The irony here is striking! Seeing Nancy Pelosi vehemently decrying corporate greed is a common sight to behold; however, she is also the one who is blocking bipartisan efforts to prevent members of Congress from engaging in individual stock picks.

Recently her family invested in call options in companies such as Google, Salesforce, Micron Technology and Roblox, betting that their stock value would go up.

Being a member of Congress, she has access to crucial information not available to the public. So, no one can deny Pelosi’s involvement in insider trading in the Big Tech stocks; especially when her capitalist husband Paul Pelosi has hit headlines on several occasions for making surprise bets in the big tech stocks to only see his profits shooting up in the end.

Also Read: Trump’s TRUTH Social will rewrite the rules of the game for Big Tech

This is hardly surprising that Nancy Pelosi is “slow-walking” the big tech regulation campaign in Congress while her husband, who heads the venture capital firm Financial Leasing Services, has made many bets on companies such as Amazon, Apple and Google.

In November last year, it was reported that Pelosi is blocking a so-called “non-discrimination bill” that would put a major dent in tech firms including Google and Amazon.

The bill — sponsored by Rep. David Cicilline (D-RI) and Rep. Ken Buck (R-Colo.) — was one of six that was rushed through the House Judiciary Committee in June. Pelosi has publicly endorsed this legislation but has done nothing to fast-track its enactment.

Pelosi— Not breaking any law but murdering her ethics

Mind the fact that Pelosi is not breaking any law here. Members of Congress are allowed to trade in the stocks using non-public information available to them through Congress, under the STOCK act enacted back in 2012.

However, they need to reveal their trades within 45 days of execution. But Pelosi’s case is different, given the fact that she is the self-proclaimed torchbearer of the anti-big tech campaign and a staunch supporter of socialist policies.

But much for Pelosi’s chagrin, her flawless streak at gaming the US stock regulations to her advantage may soon meet a lethal end by the end of this year. Some well-placed insiders were quoted as saying by The NY Post that they believe Republicans winning back the House in the midterms — a bigger possibility after Tuesday’s election victories — could pave the way for real tech reform since it would result in her removal.

It could also be sad news for her husband, Paul Pelosi. After all, he has to be the biggest benefactor of his wife’s rampant but covert beleaguerment in Congress.

Consider this; Paul Pelosi had made headlines last June after surprisingly buying 4,000 shares of Alphabet on June 18. This resulted in his profits going up by $5.3 million within a month of exercising the call option.

As it appears, we should not expect Congress to rein in Big Tech’s giants as long as we have Nancy Pelosi spearheading the Congress efforts. If current political sentiment in the US is anything to go by, Republicans may be in for a grand victory in the coming mid-term elections.

This could pave way for these big-tech reforms to see the light of the day. And that’d be the biggest nightmare coming true for socialist Pelosi and her capitalist husband.