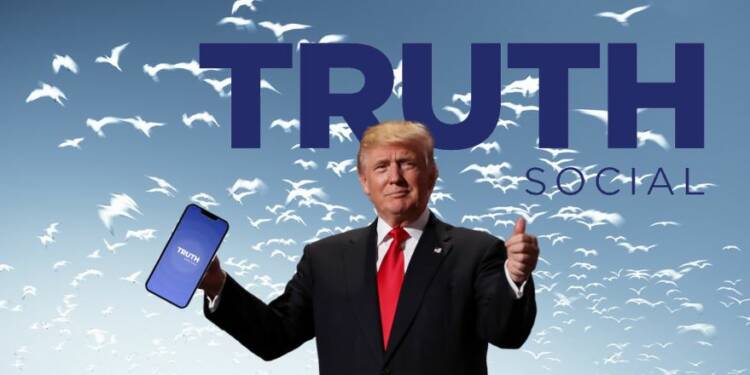 We all know how Trump was silenced. We also know that with Trump banned on big social media platforms and the liberal mainstream media running hostile commentary against Trump, there is no real medium of contact between Trump and his supporters. Yet, Trump is now looking to take on big tech with his brand-new social media platform – ‘Truth Social’.

Trump is likely to play a big role in the 2022 midterm polls. He is also likely to eye a comeback as the US President in 2024. And don’t worry if you don’t find a news network covering him fairly or if he can’t use Twitter during poll campaigns. Trump’s brand-new social media platform Truth Social will debut a beta version in November followed by a nationwide rollout in the first few months of 2022.

Also read: It’s gonna be YUUGE. Trump is coming back on the internet with a brand new social media platform of his own

Former President Donald Trump said, “We live in a world where the Taliban has a huge presence on Twitter, yet your favourite American President has been silenced. This is unacceptable.”

He added,  “I am excited to send out my first TRUTH on TRUTH Social very soon. TMTG was founded with a mission to give a voice to all. I’m excited to soon begin sharing my thoughts on TRUTH Social and to fight back against Big Tech. Everyone asks me why doesn’t someone stand up to Big Tech? Well, we will be soon!”.

Also read: GETTR : A new social media app created by an exiled Chinese billionaire has the blessings of Trump

In an interview with Fox News, Donald Trump Jr., too, said, “For so long, Big Tech has suppressed conservative voices.” He added, “Tonight my father signed a definitive merger agreement to form what will ultimately be the Trump Media and Technology Group and TRUTH Social – a platform for everyone to express their feelings.”

In a sharp jibe against the ‘Cancel Culture‘ (an attempt by the far-left to exclude conservative voices from professional or social circles), Trump Jr. said, “We are going to cancel cancel culture, we are going to stand up and push back against the tyranny of big tech.”

He also said, “What we are trying to do is create a big tent, an open and free network for people to be able to assert your First Amendment rights.”

Former President Trump is clearly stepping up his campaign against the ‘woke’ social media. Trump is changing the rules of the game by telling every American that he is the one protecting their right to freedom of speech and expression, and their ‘First Amendment’ rights.

You may like him or you may hate him, but you can’t deny that Trump was wrongly banned. You also can’t deny that arbitrary management of social media giants goes against the spirit of American free speech and this is exactly where Trump’s ‘Truth Social’ is a game changer.