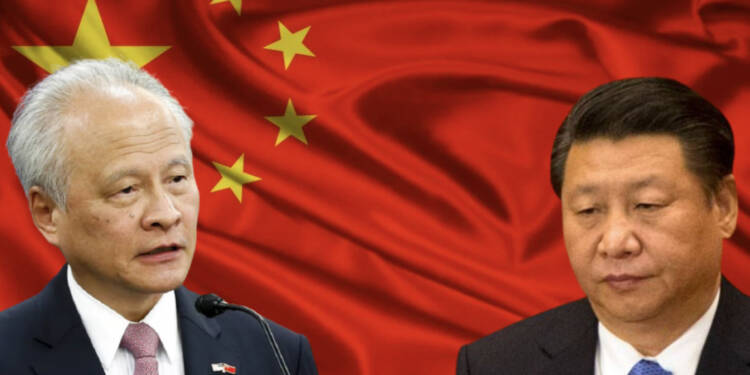 China is a strange country. The President of the country is extremely paranoid and cracks down on individuals and companies at the drop of a hat. People have to make a conscious effort to ensure that they don’t do something that ends up rubbing Xi Jinping the wrong way. So, you won’t find many people criticising Xi because if he gets angry, he can kill you or at least put you in jail for many years.

But one man has mustered the courage to call a spade a spade and lambast Xi Jinping’s shoddy ‘wolf-warrior’ diplomacy. He is Cui Tiankai- a very senior Chinese diplomat. Tiankai served as China’s Ambassador to the United States of America for a period of eight years from 2013 to 2021, and left the position only in June last year. He is a respected name in the Chinese diplomatic circles and his criticism of Xi’s policies is a huge development.

It is one thing to criticise someone and a totally different thing to absolutely demolish someone. Tiankai hasn’t criticised Xi but has demolished him altogether.

In a keynote speech peppered with expressions like “careless” and “incompetent”. The remarks were aimed against Xi’s ‘wolf-warrior’ diplomacy and have raised eyebrows in Beijing’s political and diplomatic circles.

And guess where Tiankai was speaking? A symposium co-hosted by a Chinese Foreign Ministry-run think-tank China Institute of International Studies.

The event was hosted at the iconic Diaoyutai State Guesthouse in Beijing, where foreign dignitaries are entertained. The event was probably designed as an exercise in sycophancy and blind praise for Xi Jinping. But Tiankai had different plans.

Tiankai warns against a war “we are not sure of winning”

In an interesting warning, Tiankai said, “We need to be clearheaded and fully prepared to deal with the twists and turns of China-U.S. relations and even the roller-coaster scenario in the future, and resolutely safeguard our sovereignty, security and development interests.”

Tiankai is a senior diplomat and therefore his language was a bit restrained. But let me give you the subtext of his remarks.

Tiankai is telling Xi Jinping that he helmed the affairs at China’s diplomatic mission in the US for eight years. So, he knows that Xi’s sabre-rattling against the US is a suicidal exercise and the US military will absolutely destroy China, should Beijing decide to rub the US military the wrong way or try to invade Taiwan. He is warning that China cannot win a war against the US, without caring much about Xi’s bloated ego.

Jibes against ‘carelessness’, ‘laziness’ and ‘incompetence’

Tiankai also said, “Every ounce of our peoples’ gains has been hard-won, and we must not allow them to be plundered by anyone or suffer losses due to our own carelessness, laziness and incompetence.” He added, “In the face of complex situations, we must always have the country at large in mind, and not always think about being an internet celebrity.”

Tiankai, therefore, zeroed down on the corps of wolf-warriors that Xi Jinping has raised. You have people like Zhao Lijian in the Chinese diplomatic establishment who talk about blinding the Five Eyes intelligence network by poking in their eyes. Xi himself said that countries that dare to “bully” China will see “their heads bashed bloody against the Great Wall of Steel forged by over 1.4 billion people.”

And then you also have the Chinese State media describing Australia “a bit like chewing gum stuck on the sole of China’s shoes.”

But rumour mongering, uncivilised behaviour and undiplomatic remarks by the wolf-warriors are damaging China’s reputation. This is making many sensible, peace-loving Chinese diplomats colloquially referred to as “Pandas” jittery. This is Tiankai too is criticising the violent mindset of the wolf-warriors and their fantasies of becoming internet celebrities.

Tiankai also said that the goal of the Chinese State should not be tit-for-tat sanctions but “to realize the people’s longing for a better life and the great rejuvenation of the Chinese nation.”

Cui Tiankai has dealt with the US for eight years. He is a senior name in the Chinese diplomatic establishment and also has prior experience of serving as China’s Ambassador to Japan. With all his experience, he understands that Xi’s diplomatic policies are doing more harm than good and has dared to tell this to the Chinese President in a rare act of criticism in the Communist country.