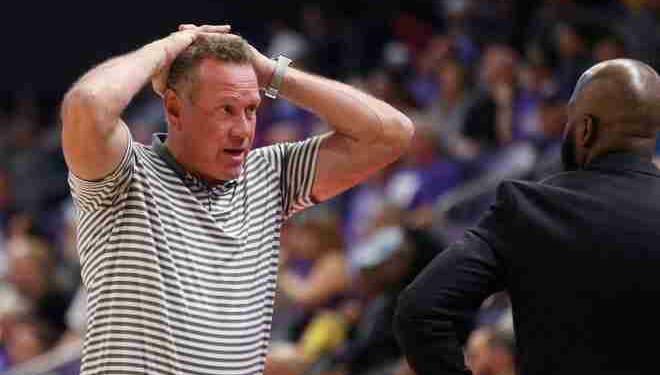 Daniel Lewis Majerle alias Dan Majerle was born on September 9, 1965. He is a former professional basketball player and former coach of the Grand Canyon Antelopes in the United States. He was a member of the Phoenix Suns, Miami Heat, and Cleveland Cavaliers in the National Basketball Association (NBA) for 14 years. Dan Majerle was a member of the United States national team that won a bronze medal at the 1988 Summer Olympics in Seoul and a gold medal at the 1994 FIBA World Championship.

He joined twitter in 2010 and has been followed by over 15k people. He is currently living in Phoenix, Arizona and not much active on twitter.

Dan Majerle was chosen 14th overall in the 1988 NBA draft by the Suns, who acquired him (along with Kevin Johnson) in a trade with the Cleveland Cavaliers for Larry Nance. When his name was announced over the public address system during the draft, he was booed. Cotton Fitzsimmons, the Suns’ coach, publicly admonished Suns fans, telling them, “You’ll be sorry you ever booed this young kid.” Dan Majerle averaged 8.6 points per game as a bench player in his first season, appearing in 54 games and starting five of them.

The Suns won 55 games and qualified for the playoffs, and Dan Majerle raised his scoring average to 14.3 points per game as Phoenix went to the Western Conference Finals, where they were defeated by the reigning champion Los Angeles Lakers.

For the next two seasons, Dan Majerle was employed as a backup, and he became known for his outstanding jumping ability and “thunderous” slam dunk, earning him the moniker “Thunder Dan.” During the 1989–90 season, he started 23 games and upped his scoring average to 11 points per game as the Suns progressed to the Western Conference Finals for the second consecutive year, only to be defeated by the Portland Trail Blazers.

Despite another strong season for Dan Majerle and the Suns in 1990–91, they were eliminated from the playoffs in the first round by the Utah Jazz. Majerle had developed into a capable three-point shooter and defensive specialist by the end of the 1990–91 season, and he was nominated to the NBA All-Defensive Second Team.

Majerle continued to progress in the 1992 season, becoming a more proficient three-point shooter and defensive specialist. Dan Majerle was selected to play in the 1992 NBA All-Star Game despite starting only 15 of the 82 games he appeared in.

The Suns made the playoffs once more, but were defeated by Portland in the conference semifinals. Phoenix took a big step toward winning the NBA title this offseason when they traded for great player Charles Barkley from the Philadelphia 76ers.

Dan Majerle was born and reared in Traverse City, Michigan, and attended Traverse City High School (now Central) and Central Michigan University in Mount Pleasant, where he averaged 21.8 points and 8.9 rebounds per game for four years. He was a key part of the Chippewas’ NCAA Tournament run in 1987. Until Marcus Keene broke it in the 2016-17 season, he owned the school season point record.

Frank Majerle Sr., Majerle’s great-grandfather, moved to the United States at the age of 20 from what is now Slovenia, but was once part of Austria-Hungary. Frank Sr. settled in Haring, Michigan, and married Anna Suhorepec (Anglicized to Suhropetz), an American-born Yugoslavian woman whose parents were also from Yugoslavia, specifically Slovenia.

Raper V Roy and his legacy, Biography and Career