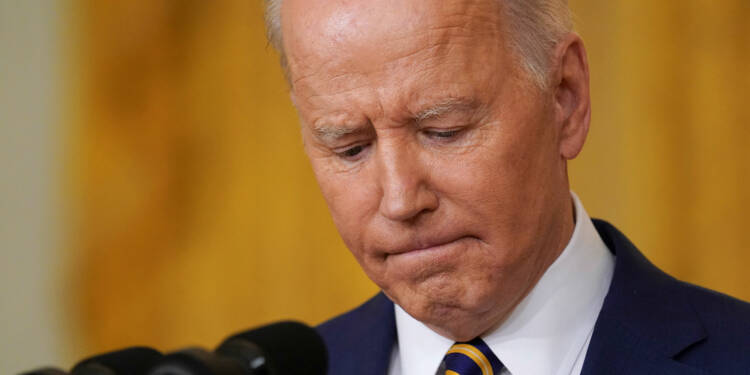 The Biden administration has recently completed its first year in office and is bracing itself for the midterm elections scheduled for this year. Biden knows about his performance so far; his decisions, policies and their result; his failures and blunders etc. Biden is aware of his shrinking approval ratings and his decreasing popularity. Seeing himself surrounded by so much uncertainty and pressure, he was poised to say what he has said.

During a press conference on Wednesday, Biden said that the 2022 midterm elections could prove to be illegitimate as once again republicans want to hijack American votes. Regarding the legislative attempts of the republicans to strengthen the election security, Biden said, “It all depends on whether or not we’re able to make the case to the American people that some of this is being set up to try to alter the outcome of the election”.

Also Read: If elections are held today in the United States, Trump will beat Biden by a huge margin

Soon after the speech of Biden, the Democrats jumped in to defend him and justify his comments about the legitimacy of elections. They repeated that the 2022 elections could easily be illegitimate. This way they completely and conveniently overlooked the safe election rhetoric that was parroted by them and Biden after the 2020 election. Also, Biden’s handlers at the white house tried their best to clean up his comments and defend him but it was too late and the damage was done.

Trying to defend Biden, the white house press secretary Jen Psaki tweeted on Thursday, “He was making the opposite point: In 2020, a record number of voters turned out in the face of a pandemic, and election officials made sure they could vote and have those votes counted”. She further claimed that the president “was explaining that the results would be illegitimate if states do what the former president asked them to do after the 2020 election: toss out ballots and overturn results after the fact”. She even tried to pin the blame for election problems on Trump saying, “The Big Lie is putting our democracy at risk. We’re fighting to protect it”.

Kamala Harris, the vice president of the US said, “Let’s not be distracted by the political gamesmanship”, refusing to acknowledge that Biden publicly doubted and questioned the legitimacy and future of US elections.

Unlike Trump, Biden was not attacked and scolded by the Big Tech and corporate media for the comments he made. Instead, the corporate media outlets tried to justify Biden’s controversial comments.

Why is it happening?

The falling popularity and approval ratings of Biden and his administration has become a headache for the democrats. They realize that their chance of winning the 2022 midterm election could be fading along with the falling poll number of Biden. This is the reason why the Biden administration and the democrats overlooked their previous hypocrisy on the filibuster and have urged for its abolition so that it could become easier for them to overhaul the US election process according to them.

The failures of the Biden administration, like, the rising unemployment, inflation, job losses, cost of living, crime rate, gun violence, COVID cases, COVID deaths, vaccine hesitancy etc are some of the reasons for the falling poll number of Biden. Apart from these, there are several foreign policy blunders like soft stance on China and Russia, the Afghanistan fiasco, the US reaction to the Ukraine crisis, degrading relation with France, Japan, India, EU and the fading US support for Taiwan, which have contributed in bringing down the approval ratings of the Biden administration.

The falling approval ratings of the Biden administration, his comments on election legitimacy and the support he is getting for his comment from the media and his party members truly signals that the 2022 US midterm elections are much nearer and coming sooner than Americans expect.