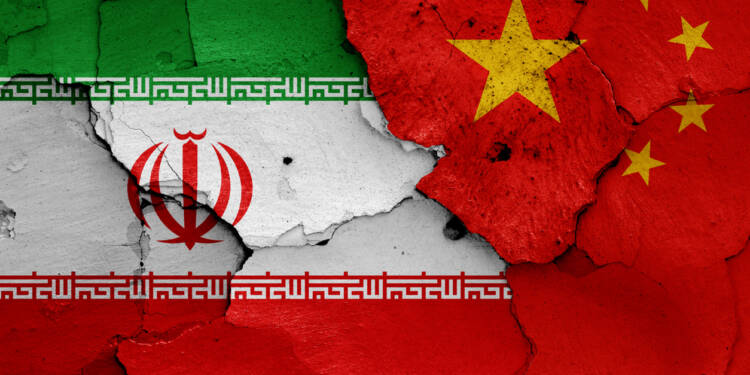 flags of Iran and China

The US sanctions on Iran have borne two major impacts on Iran. First, they have crippled the country’s economy and second, they have reduced the Shi’ite country to a mere client state of China. What China can’t do on its own, gets it done through Iran.

Covert militaries ties between the Junta regime and Iran

Diplomatic sources were quoted by Asia Times as saying that officials close to Islamic Revolutionary Guard Corps (IRGC) have visited Myanmar twice or thrice since the military seized power and suspended democracy in a February 1, 2021, coup.

Iran is known to have supplied weapons to repressive regimes in past as well. It supplies weapons to its militias in Syria, Iraq, and Yemen. Last November, reports also emerged that Iranian Houthi allies could be smuggling weapons across the Gulf of Aden to Somalia. So, newly emerged military ties between Iran and Myanmar become even more suspicious.

According to data on Flightradar24, a plane owned by the Iranian cargo airline Qeshm Fars Air flew from Mashhad, Iran’s second-biggest city, to Myanmar last Thursday. The plane returned to Iran from Myanmar the following day, the flight tracker data reveals.

Make no mistake, Myanmar depends on China, Russia and India to meet its defence needs. However, military-enabled atrocities in Myanmar against civilians have led to greater scrutiny of defence ties between Junta and foreign governments. For instance, ASEAN nations like Singapore, Indonesia and Malaysia have supported an informal diplomatic boycott of the Burmese military in view of the imprisonment of democratic leaders.

This became evident when a recent visit by the current ASEAN chair and Cambodian Prime Minister Hun Sen sent the ASEAN nations into a tizzy. Cambodia is heavily influenced by China, and it’s a great opportunity for the communist nation to exploit the Southeast Asian alliance to its own advantage. China is pushing Cambodia to legitimize Myanmar’s Junta regime even when ASEAN nations continue to raise their human rights concerns.

Why does China need Myanmar?

China needs Myanmar. It seeks to exploit Myanmar’s strategic location to encircle India and overcome its Malacca strait dilemma. Also, Myanmar is a key rare earths supplier to China. Chinese media say about half of China’s heavy rare earths, such as dysprosium and terbium, come from Myanmar. So, China is keen to help out Myanmar politically and militarily to save its interests in the country. But at the same time, it also wants to avoid ASEAN’s ire over its military ties with the Junta regime. Hence, Iran has now come to China’s rescue in Myanmar.

After all, Iran and China are strategic partners. Last week, Beijing said that the 25-year $400 billion deal between Iran and China was close to implementation. The deal, which was signed last year, underlines China’s long-held opposition to US sanctions and will to strengthen security partnership with the Shi’ite country.

Read More: Myanmar is Putin’s ticket to Indo-Pacific, and he doesn’t care about Jinping or the CCP’s interests in the country

Time for ASEAN to wake up

Iran is already faced with a pile of strict economic and military sanctions from the US and UN. So, any threat of more sanctions from the US may hardly impede the security partnership between Tehran and the Burmese military. Also, Iran seems to pay lesser attention to ASEAN’s concerns for now, in its bid to please China.

By emboldening the Junta regime by supplying it with weapons via Tehran, China is simply overstepping ASEAN’s redline over Myanmar. It’s the right time for ASEAN to wake up to China’s nefarious plans and warn Beijing of grave consequences.