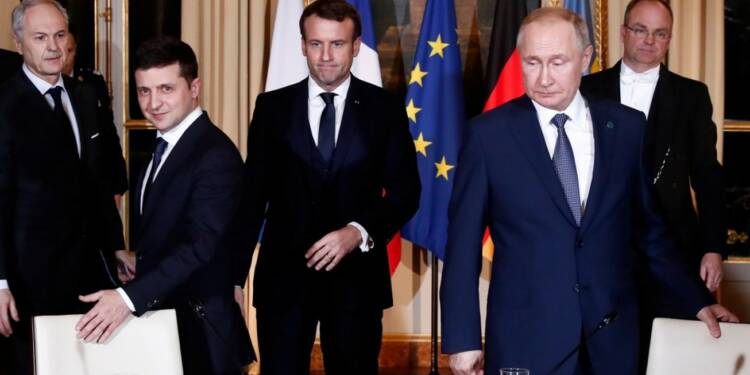 The world is just keen about the happenings in Ukraine. With last week’s open acknowledgement from Joe Biden and with Russian troops arraigning more than 100,000 troops across all three border sides of Ukraine, kremlin looks more than determined to plunge ahead with its bellicose rhetoric.

With diplomatic talks remaining inconclusive and as Joe Biden currently looking to slither past the muddled waters that he has dipped into, the Normandy Talks with German, Russian, French, and Ukraine advisors will meet to discuss the current impasse in Ukraine on January 25.

In need of course Correction

With Ukraine and Russian officials giving a welcome nod to resume with Normandy talks, the German government signalled that they are “caustically optimistic” about the talks and went further ahead by saying

“France and Germany are working closely together to resume new negotiations in the Normandy format. Because one thing is clear: there can be no decision on security in Europe without Europe, “

Despite the never-ending flurry of diplomatic parleys and with Putin likely to dictate the policies of his choice that he wishes to pursue, the timing of the talks holds relevance with Ukraine in dire need to resist any further incursion from their cantankerous neighbours.

Expressing his views about the diplomatic path to resolve the conflict, Ukraine’s president Volodymyr Zelensky said, “It is time to agree on an end to the conflict, and we are ready for the necessary decisions during a new summit of the leaders of the four countries,”

The last held Normandy talks between these four countries date back to 2019. The revival of the summit following incessant Russian offensives and amassing of troops will give hope to bring the back EU to the negotiation table. The EU in the past has missed the talks convened in Geneva.

Biden has been fighting a long fight to cement his position in the top office. Just one year in the office has badly tainted the repute of the old prudent and empathetic vice president of the USA. With a messy democracy to handle out and his developing strife with an opportunist in Putin, Biden’s day ahead looks dim with plummeting popularity ratings ahead of mid-term elections.

“To allow Russia to violate those principles with impunity would drag us all back to a much more dangerous and unstable time, when this continent and this city were divided in two, separated by no man’s lands, patrolled by soldiers, with the threat of all-out war hanging over everyone’s heads. It would also send a message to others around the world that these principles are expendable, and that, too, would have catastrophic results.”

Despite the talks and warnings issued, the Russian troops keep climbing on the border of Ukraine. The US also failed to deliver a satisfactory response to the Russian demand to hinder further NATO expansion.

Meanwhile, in Kyiv, the leaders were caught on the nerves with the last week slip up from Biden at the white house where he said, “It’s one thing if it’s a minor incursion and then we end up having a fight about what to do and not do,” he said, adding “there are differences in NATO as to what countries are willing to do depending on what happens.”

As Russia keeps on knocking on all doors of Ukraine with massive cyberattacks while cutting power and heat, the kremlin nevertheless finds a stout resistance in the Ukrainian nationals who will resist rather than flee according to a recent report.

It is in need for Biden to course-correct and to tamp down any further Russian aggression, in order to avoid an administrative debacle.