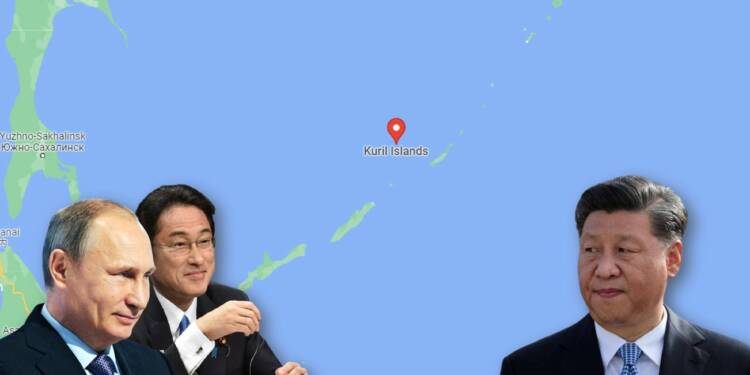 There are several island chains in the world, which despite their size hold immense geopolitical capital. One such Island chain, the Kuril Islands, lie in the north of Japan’s northernmost major island, Hokkaido. These Islands provide crucial leverage for any country in control of them when it comes to controlling the passage towards the Arctic region.

This strategic importance of the Islands is the reason why Russia and Japan have been at loggerheads for a long time. However, the countries have been in deliberation to solve the issue and as the importance of the Arctic is now an established fact, things may be moving towards a solution.

Japanese Prime Minister Fumio Kishida stated that he is determined to advance peace treaty talks with Russia through building trust-based relations with Russian President Vladimir Putin. This was Kishida-san’s response to questions from lawmakers at a plenary meeting of the upper house of parliament last week. And as both the countries move towards a solution, this could be a nightmare for China’s Arctic ambitions.

Japan, Russia, and the Kuril Islands

In the last days of WWII, the Soviet army captured the southernmost four islands of the isolated archipelago, which are located north of the Japanese island of Hokkaido, in a surprise attack on Japan. However, Japan has never publicly recognised Russia’s claims to the region. As a result of this issue, the countries have never signed a peace treaty officially ending the conflict, which has hampered political and economic cooperation.

The status of the four southernmost Kuril Islands, located between the Sea of Okhotsk and the Pacific Ocean, has proven to be an impenetrable hurdle in the two countries’ efforts to reach a formal peace treaty. Despite being under Russian authority since the war’s end, the islands, known in Russia as the Southern Kurils and in Japan as the Northern Territories, are treated as sovereign territory by both countries, creating a geostrategic flashpoint.

However, the way in which both the countries are interested in concluding these problems diplomatically, things can take an entirely different turn. Both Russia and Japan have been concerned about how China has been acting. For Russia, China’s aggressive push into the Arctic is a reason for concern. On the other hand, Japan too is concerned about the attempts by China to infringe on its sovereignty.

The concerns of both Russia and Japan have coincided and with China in mind, they are moving towards solving their dispute and creating a united front. Going ahead, this can turn out to be a significant bulwark and leverage to manage the activities of the Chinese Communist Party.

With climate change and global warming melting the polar ice cap, the Arctic is opening up to transportation, trading, and commercial activity. The new shipping routes opening up in the Arctic are supposed to shorten the distance between Europe and Asia. Ideally, Russia, being an Arctic State, should have access to the new shipping routes towards Europe but China is trying to play spoilsport, and this is why the Arctic Council seems to have got involved. However, things are supposed to go in the favour of Russia as it solves the longstanding dispute with Japan.

For Russia, the Kuril Islands are very important. The strait between Kunashir and Iturup does not freeze over in winter, thus, control of the islands ensures that Russia has year-round access to the Pacific Ocean for its Pacific Fleet of warships and submarines based in Vladivostok. Moreover, it is the only archipelago that can give the Russian Pacific Fleet access to the Pacific Ocean since other straits are under the control of foreign countries or are underdeveloped.

It is an obvious fact that China wants to hegemonize the Arctic, and the only way for it to do so is through the Russian Far East. Russia, on the other hand, has masterfully turned the tables on Beijing by bringing Japan into the picture. Not that China had any hope of reaching Russia’s far east in the first place, but by allowing Japan access to a territory that Moscow is fiercely protective of, Vladimir Putin has demonstrated to China that Japan is a friend of Russia that China will never be.

By forging a peace treaty with Japan, Russia will have year-round access to the Indo Pacific, which would be a nightmare for China. Japan, on the other hand, would gain equal access to the Kuril Islands, the Far East, and the Arctic region. And by means of this, these two countries will create their own version of a great wall that can block China’s Arctic ambitions.