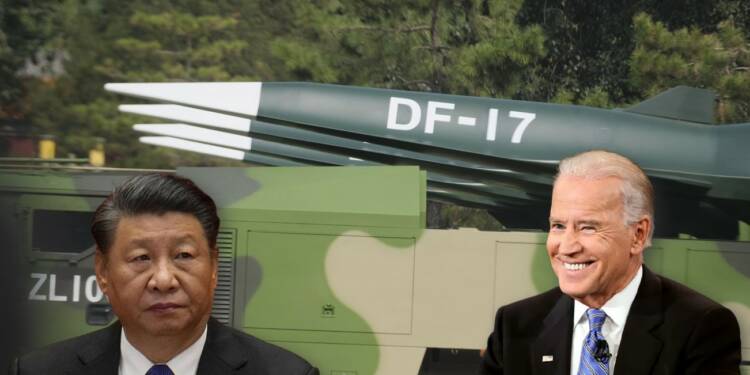 The US officials were left stunned when a Financial Times report revealed that Beijing had tested a nuclear-capable hypersonic missile in August last year. The test demonstrated that China has now garnered the ability to strike any point of earth in no time and that too without letting the target know about any such imminent attack. This bold portrayal of the hypersonic program had dumbstruck the US, whose own hypersonic program runs far behind that of China.

Top Chinese scientist loaded with crucial data defects to the US

However, what has now come as a blessing in disguise for America is the defection of a top Chinese scientist to the West. A report published by Daily Express revealed that a senior rocket technician, connected to the state-owned Aviation Industry Corp of China, recently defected to the US with the help of the UK’s top intelligence agency.

He was closely working on China’s advanced hypersonic missile program, where he helped develop a mid-range hypersonic boost-glide vehicle capable of carrying DF-17 missiles to a range of up to 2,000 miles.

Making things worse for China, the defecting scientist was attached to the developmental program of hypersonic missile delivery system that China demonstrated last August for the very first time.

Sources were quoted by Daily Express as saying that the Chinese technician was able to smuggle out crucial technical data related to China’s hypersonic program, along with the intelligence that he carried in his head.

Read More: China can now nuke any nation from the space, guess who empowered them- Bill Clinton

What made the Scientist betray the CCP?

Now let’s come to the most interesting part of the Story. How did the senior technician make his way out of the communist hellhole safely, and what prompted him to do so? Well, the technician was not happy with the treatment he was being accorded in return for his hard work.

He had been passed over for promotion. His juniors were promoted and awarded at the expense of his hard work. So, the scientist chose to give the CCP and its hypersonic program the biggest jolt of all time.

How did the Scientist find his way out of China?

He collected important data and established communication with a British intelligence asset in Hong Kong at the end of September last year. He claimed that he was possessing crucial information related to China’s hypersonic glide vehicle. He also demanded asylum for himself and his wife and Child.

The UK’s top-secret intelligence agency, MI6, urgently deployed a three-person team in Hong Kong and the CIA was also informed about the operation. A plan was made according to which the Scientist and his family would travel to Hong Kong via a specially developed route. Eventually, the family met the MI6 team in Hong Kong, which was taken to a US military base in Germany and then into the US via the UK.

All precautions were taken. MI6 knew the Scientist could very well be a Beijing plant. A cat-and-mouse game was developed over the next few days in which the scientist’s credentials were “copper-bottomed.” Once the MI6 was satisfied with the defecting scientist’s claims, he began revealing secret information about China’s confidential hypersonic program.

Read More: China has America’s deep state in its pockets and the US is fast losing its military advantage over China

How Intelligence sources pursued his defection

Speaking about the defection, an intelligence source said last week: “He was extremely co-operative. This is an intelligent man; a man who keenly follows cricket but prefers Jack Daniels to lager, a man who has played a key role in the development of hypersonic weapons in China, and a man who felt aggrieved by the way he had been treated.”

A game-changer or damp squib?

Now here comes the most important question. How will this defection help the US, or any other country impede China’s top-secret and highly ambitious hypersonic program? Well, sources quoted by Daily Express believe this could erode China’s dominance in the hypersonic sector for at least two years from now. It could take China two years to render the intelligence smuggled out by the scientist completely ineffective.

Intelligence sources also mentioned how this defection may prove to be the biggest turning point in the ongoing hypersonic rivalry between the US and China. One official related to the operation explained, “It will probably buy us two years. We estimate it will take China two years to be able to make changes in its programme sufficiently substantial as to render this intelligence ineffective. In this sphere, two years is a very long time.”

Make no mistake, unlike traditional ballistic missiles, a hypersonic missile is manoeuvrable, making it harder to track and defend against. What is more alarming is the fact that in the case of China launching a hypersonic nuclear missile against the US, it won’t be able to defend itself given its questionable ability to track and take down a flying hypersonic weapon.